This is a bit academic, but there is some very good information concerning “secular stagnation” and what might be behind the whole discussion.

Stefano Di Bucchianico is a visiting professor at the Free University of Berlin. He obtained his PhD in Economics in 2018 from the University of Roma Tre, in Italy. 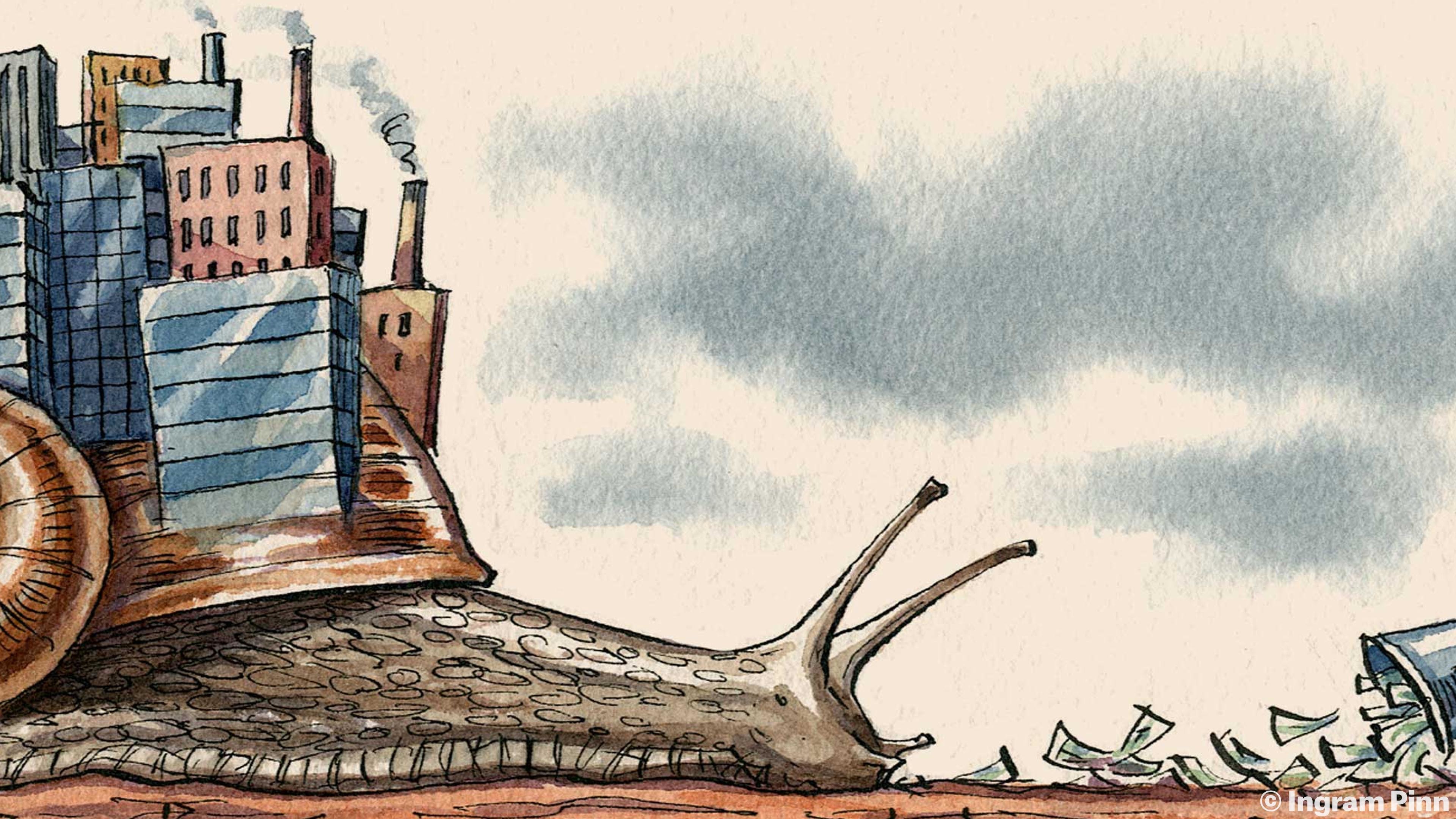 Stagnation and inequality have been, for a long time, topics reserved to heterodox economists. Then came the Great Recession, and the term Secular Stagnation started to trend. In particular, in 2014 Larry Summers stressed the possibility that advanced capitalism was facing long-term stagnation, echoing Alvin Hansen’s worry from 1939 in the aftermath of the Great Depression, and a fervent discussion started to take root inside the academic community. But a recent break within the New-Keynesian consensus, put forward by Summers himself, has now triggered a new wave of debate.

The Neoclassical New-Keynesian take on Secular Stagnation has been grounded in the difficulties monetary policy faces in trying to hit the natural interest rate (the rate at which savings and investment are equal at full employment) when the latter turns negative. This Zero Lower Bound constraint makes it difficult for central banks to move the policy-controlled nominal interest rate low enough to reach the interest rate that in theory ensures full employment. Normally, the presently scant inflation and output below potential would signal to central bankers the need to lower the interest rate (a behaviour usually summarised via the famous ‘Taylor Rule’, Taylor 1993). However, if the policy-controlled nominal interest rate is already zero or very close to it, these mechanisms cannot work properly, and the economy comes to a standstill. Monetary policy eventually becomes powerless, with even extraordinary monetary measures such as quantitative easing failing to boost growth.

This basic intuition has later been elaborated in more complex analytical models, which find an explanation for this condition in a mix of elements, such as ageing population, slower technological progress, rising income inequality, and households deleveraging.

Last summer witnessed a harsh discussion between Stiglitz and Summers himself, in which the former buttressed the case for pure and simple fiscal policy to revive aggregate demand and employment.  One year later, Summers appears to progressively be moving towards the direction hinted at by these authors. Indeed, Summers and Stansbury have recently gone back to the topic, offering what can be considered a major break with the New-Keynesian perspective on growth and stagnation. In an even more radical move, the authors reveal their increasing scepticism about conventional policy discussions, since they “are rooted in the (by now old) New Keynesian tradition of viewing macroeconomic problems as a reflection of frictions that slow convergence to a classical market-clearing equilibrium.” This shifts them from “progressive” neoclassical positions to those somewhat closer to a long tradition of economic heterodoxy. Accordingly they argue that “the role of particular frictions and rigidities in underpinning economic fluctuations should be de-emphasized relative to a more fundamental lack of aggregate demand,” hoping economic policy will in the next future be informed more by ‘Old Keynesian economics.’

This means that the Zero Lower Bound is not responsible for hampering healthy monetary policy, thereby bringing about stagnation. Similarly, underemployment, which is what we see in the US right now, does not emerge because firms are slow and reluctant in adjusting their menu prices, employers pay an inefficient wage to avoid workers’ shirking, or because interest rates cannot fall enough (all examples from the New-Keynesian arsenal). Instead, scholars and policymakers should recognize that the culprit lays in a lack of demand for products and services, which in turn slows down growth and curtails employment.

It is difficult to overestimate the importance of those openings with respect to the role of aggregate demand in determining not only current economic performance (something which is not alien to New Keynesian economics), but also growth and employment trends. All the more so if these claims are accompanied by a forceful rebuttal of the role of monetary policy vis-à-vis fiscal crackdowns operated by governments. Given the constructive way in which Summers and Stansbury are looking anew at the matter, I would like to raise some additional theoretical and practical points and provocatively ask them whether they be willing to accept Post-Keynesian perspectives on growth, employment and income distribution.

‘Old’ Keynesian scholars, indeed, have always been partial to demand-side fiscal policies and very critical of the concepts of natural interest rate and loanable funds. Why and with what political (more than policy) implications?

Let us start with monetary policy. While it is very plausible that ultra-low or even negative nominal interest rates can severely damage the financial system, Post-Keynesians stress the broader point that monetary policy is generally incapable of stimulating the economy. Keynes (1936) himself emphasized that equality between savings and investments is brought about primarily via changes in income levels, with the interest rate left in an altogether secondary position. This would become especially visible in a “liquidity trap,” but remains true also outside it, contrary to what the successive Neoclassical Synthesis started to argue (Hicks 1937, Modigliani 1944). The underlying reason is that the effect of interest rates reductions on private business investment is usually mild, that the role of aggregate demand growth can be expected to be of superior importance, and that public deficit spending can better stimulate demand. Therefore, the however fundamental critique of monetary policy effectiveness applies, regardless of the course of actual interest rates.

Here we have a first instance in which the so-called ‘Old Keynesian’ principles come in peculiarly handy. But there is more to the story.

Secular Stagnation has been hitherto addressed by referring to the decline of the natural interest rate, eventually to the negative territory. Summers and Stansbury mention (without expanding on the argument) the possible non-existence of such a rate. However, they do not expand on the argument, which by the way stands in contrast with what Larry Summers was stating in those very same days in a NBER paper co-authored with Łukasz Rachel.

On the contrary, on this point, the Post-Keynesian view is very clear and established. The use of the natural interest rate determined by the marginal productivity of capital (and of an equilibrium real wage given by the marginal productivity of labour) has long been known as difficult to defend, after the criticism related to the “Cambridge capital controversies”  spurred by the contributions of Joan Robinson and Piero Sraffa . Even besides this fundamental criticism, the natural interest rate concept relies on a loanable funds schema, according to which prior available savings are necessary to fund investment. This idea presents several theoretical and empirical problems, and leaves financial authorities in serious predicaments. Indeed, the natural rate estimates have been subject to a slew of criticisms and its theoretical applications have been proven not to fit the available empirical evidence on savings and investment. In addition, the concept gets all the hazier when such an interest rate takes up negative values, which are hardly compatible with a Neoclassically-determined equilibrium position.

Why then do Summers and Stansbury hesitate at recusing the concept? Getting rid of it entirely carries significant policy consequences, which may explain this behaviour. In fact, the existence of a natural interest rate toward which the real rates should tend to converge, thus guaranteeing full employment, implies the conclusion that underemployment emerges when there is some rigidity that hinders that convergence. This for example compels policymakers to call for nominal wage cuts when there is (involuntary) unemployment, given that the latter cannot but result from an insufficient fall of the real wage.

Indeed, let us then come to the actual policies, for example Trump’s tax cuts. Certainly, we cannot pin on the reform, or on any taxation plan, the prolonged trend of rising inequality afflicting the United States; however, it adds to it. What is more, an IMF paper has recently shown that the cuts have had, in line with “Old” Keynesian predictions, a secondary role in spurring US investment growth, the bulk of the effect coming from aggregate demand expansion.

The objection of New Keynesian scholars to this policy thus far concentrates on its effect on the value of the natural interest rate, rather than on the overall socio-economic environment (including the evolution of aggregate demand). Indeed, in that line of thought, the additional flow of savings from top income households adds, for an unchanged demand for investment, to the supply of loanable funds, thereby lowering the natural rate of interest. In their view, if this dynamic happens in “normal” state of the world, there would be basically no problem for the central bank to appropriately lower the policy-controlled interest rate down to match the natural interest rate drop. In fact, that has been the policy for the whole period of the Great Moderation, when wage repression has caused inequality to rise and the savings of the rich to increase thanks to rising indebtedness. As we know, this eventually became a wide-spread problem when the financial crisis erupted and the attempt by households to deleverage hampered aggregate demand.

Hence, within that framework the preoccupation rests on the possibility for monetary policy to correctly work. Getting the causal direction straight is important to put inequality at the forefront of our economic—but also, social and political—problems, and not just pull it out of the hat when the situation becomes unmanageable (Ferguson et al. 2018, Storm 2017). Failing to do so considerably impairs the possibility to look in a satisfactory way not only at the plea of real-world phenomena which can trigger stagnation, something “Old Keynesianism” may instead do, but also at the possibility to foster increasing economic well-being for all, as a permanent policy goal.

Hence, if there is a point of contact between Post-Keynesians and Summers and Stansbury, that is the acceptance of a demand side explanation of the current stagnation, regardless of the presence of price rigidities.

This opening, given the circumstance, is remarkable and should be welcomed, but its authors are still halfway the road.

References and footnotes have been removed. To view these, please go to the original here

Transport & Environment – Von der Leyen’s ‘One In, One Out’ Policy ‘Incompatible’ with Climate Efforts

If anyone was wondering why Germany was so insistent in placing Ms von der Leyen in this office needs only read this article and the news that Germany is giving up on its climate targets. […]

If one feature of any truly revolutionary moment is the complete failure of conventional categories to describe what’s happening around us, then that’s a pretty good sign we’re living in revolutionary times. David  Graeber is […]