Hayek was enamoured by Pinochet and the neo-liberal regimen he installed in Chile based upon the teachings of Hayek and his allies – and of course of the intervention of the USA. This is something we shall see much more in the world as unbridled neo-liberalism spreads its destruction. 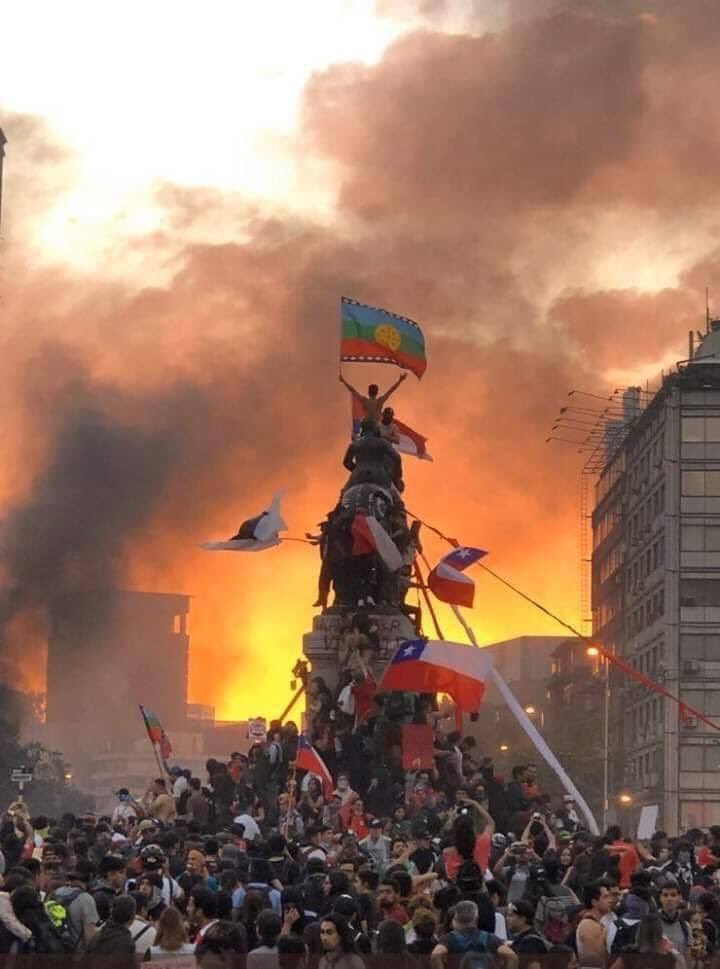 It is not common for an OECD county to shoot and kill 16 people in two days of socially motivated riots. (Perhaps only Turkey, in its unending wars against the Kurdish guerilla, comes close to that level of violence.) This is however what Chilean government, the poster child of neoliberalism and transition to democracy, did last week in the beginning of protests that do not show the signs of subsiding despite cosmetic reforms proposed by President Sebastian Piñera.

The fall from grace of Chile is symptomatic of worldwide trends that reveal the damages causes by neoliberal policies over the past thirty years, from privatizations in Eastern Europe and Russia to the global financial crisis to the Euro-related austerity. Chile was held, not the least thanks to favorable press that it enjoyed, as a exemplar of success. Harsh policies introduced after the overthrow of Salvador Allende in 1973, and the murderous spree that ensued afterwards, have been softened by the transition to democracy but their essential features were preserved. Chile indeed had a remarkably good record of growth, and while in the 1960-70s it was in the middle of the Latin American league by GDP per capita, it is now the richest Latin American country. It was of course helped too by high prices for its main export commodity, copper, but the success in growth is incontestable. Chile was “rewarded” by the membership in the OECD, a club of the rich nations, the first South American country to accede to it.

Where the country failed is in its social policies which somewhat bizarrely were considered by many to have been successful too. In the 1980s-90s, the World Bank hailed Chilean “flexible” labour policies which consisted of breaking up the unions and imposing a model of branch-level negotiations between employers and workers rather than allowing an overall umbrella union organization to negotiate for all workers. It was even more bizarrely used by the World Bank as a model of transparency and good governance, something that the transition countries in Eastern Europe should have presumably copied from Chile. The brother of the current Chilean president, scions of one of the richest families in Chile, became famous for introducing, as Minister of Labor and Social Security under Pinochet, a funded system of pensions where employees make compulsory contributions from their wages into one of several pension funds, and after retirement receive pensions based on investment performance of such funds. Old-age pensions thus became a part of roulette capitalism. But In the process, the pension funds, charging often exorbitant fees, and their managers became rich. José Piñera had tried to “sell” this model to Yeltsin’s Russia and to George Bush’s United States, but, despite the strong (and quite understandable) support of the financial communities in both countries, he failed. Nowadays, most Chilean pensioners receive $200-$300 per month in a country whose price level (according to International Comparison Project, a worldwide UN- and World Bank-led project to compare price levels around the world) is about 80% of that of the United States.

While Chile leads Latin America in GDP per capita, it also leads it terms of inequality. In 2015, its level of income inequality was higher than in any other Latin American country except for Colombia and Honduras. It exceeded even Brazil’s proverbially high inequality. The bottom 5% of the Chilean population have an income level that is about the same as that of the bottom 5% in Mongolia. The top 2% enjoy the income level equivalent to that of the top 2% in Germany. Dortmund and poor suburbs of Ulan Bataar were thus brought together.

Chilean income distribution is extremely unequal. But even more so is its wealth distribution. There, Chile is an outlier even compared to the rest of Latin America. According to the Forbes’ 2014 data on world billionaires, the combined wealth of Chilean billionaires’ (there were twelve of them) was equal to 25% of Chilean GDP. The next Latin American countries with highest wealth concentrations are Mexico and Peru where the wealth share of billionaires is about half (13 percent of GDP) of Chile’s. But even better: Chile is the country where billionaires’ share, in terms of GDP, is the highest in the world (if we exclude countries like Lebanon and Cyprus) where many foreign billionaires simply “park” their wealth for tax reasons. The wealth of Chile’s billionaires, compared to their country’s GDP, exceeds even that of Russians.

Such extraordinary inequality of wealth and income, combined with full marketization of many social services (water, electricity etc.), and pensions that depend on the vagaries of the stock market has long been “hidden” from foreign observers by Chile’s success in raising its GDP per capita. But the recent protests show that the latter is not enough. Growth is indispensable for economic success and reduction in poverty. But it is not enough: if there Is no social justice and minimum of social cohesion, the effects of growth will dissolve in grief, demonstrations, and yes, in the shooting of people.