We have posted three excellent articles concerning what central banks and governments are doing, or should be doing, in the turbulences resulting from the Coronavirus. This one is by Steve Keen, the other two are “An Economic Plan to Beat the Impact of Coronavirus” by Richard Murphy (here) and “Central Banks and Coronavirus” by Frances Coppola (here)

One reason why we react far too slowly to threats like the Coronavirus is that thinking about processes that involve exponential growth just doesn’t come naturally to us: we tend to extrapolate linearly instead. That is seriously hampering our reactions to this threat. If we did think exponentially, we’d be practicing serious containment, right now. I want to illustrate why with a simple graph.

There are roughly 100,000 serious Coronavirus cases around the world now, and without public health measures, the infections appear to double every six days. That rate will not be sustained as more people get infected, and many may have only mild symptoms. That said, if the base rate of doubling did continue, and if the serious cases were the only ones that existed (which they’re not of course: there are many carriers who are asymptomatic right now), then the entire human population of the planet would be infected in three months.

What if we slow the doubling rate down a bit, to ten days, by better hygiene, not congregating in large crowds, etc? Then it would take five months for everyone to be infected.

We could do better than that though: by really limiting social interaction, really ramping up personal hygiene in public. If we slowed the doubling rate to once every month, it would take one and a half years to infect the whole planet’s population.

And if we did even better, perhaps with something approaching China’s controls, and reduced the doubling rate to two months? Then it would be three years before the virus infected everybody.

This is why it’s necessary to impose strict limits on social interaction now, not later. The longer we leave it, the longer the doubling rate stays at 6 or so days. All it takes is a hundred such days, and it’s too late: everyone already has it.

So a sensible containment policy would ban large gatherings, where carriers (many of whom are non-symptomatic) can infect many others. Sporting events should stop—or rather events could still happen, but be watched by near-empty auditoriums, and broadcast. Schools and universities should shut down—or conduct classes online. Churches should hold services online as well. Since it seems to take about 15 minutes of sustained exposure within 1-2 metres to pass the disease on, actions that eliminate such gatherings now could slow down the disease’s momentum, and give us more time to develop vaccines, anti-virals, pre-symptomatic screening systems.

The trouble is, this reaction will be seen as too extreme, and resisted—until such time as the number of infections have hit such a level that everyone panics. So I worry that we won’t politically accept extreme confinement measures until we’ve hit a terrifying number of serious cases and deaths—perhaps once 100,000 people have died.

We’re currently at 3,000 deaths from 90,000 reported serious cases. How long will it take us to get to 100,000 deaths, if the doubling rate sticks at the current 6-day level? One month: by the beginning of April.

I don’t think it will be that fast by the way—changing personal behaviour might increase the doubling rate a lot, to say, every two weeks. How long does that give us till we hit 100,000 deaths? About 70 days—or early May.

Many other factors will come in to play, some good, some bad. Hygiene and isolation will both improve—but this will challenge our financial system, as people stop earning an income and businesses go bankrupt. So we have to plan for that: as I suggested in my previous post, we need to stop the ordinary rules of capitalism, which are suited for episodic events, making this systemic crisis even worse. Some ideas include 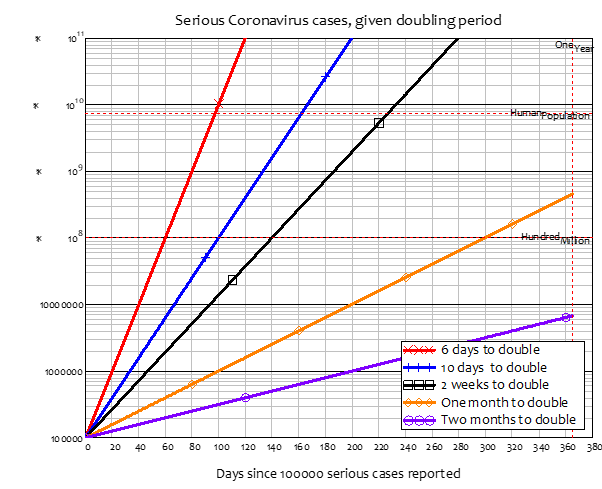 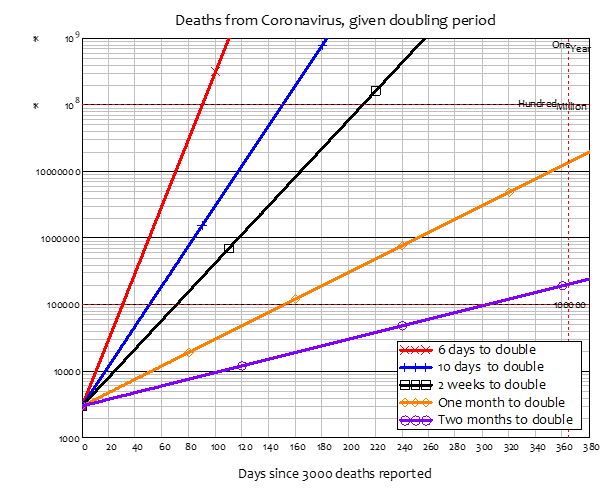 After eight grueling years of austerity, Greece today emerged from its bailout program. The $330 billion in loans from the European Union, the European Central Bank, and the International Monetary Fund saved the country from […]

Positive Money EU – ECB profits: Will Greece get its money back?

Not only is Greece being denied the entire refund for the illegitimate ECB profits made out during the crisis, but some countries are now conditioning the next repayment to stricter reforms. By Alessia Del Vasto […]

Jonathan Cook – Trump may be on trial, but the system that produced him will be acquitted

Jonathan Cook keeping his eye on the political ball. Jonathan Cook is an award-winning British journalist based in Nazareth, Israel, since 2001 Cross-posted from Jonathan Cook’s website To read the tweets in this article in […]