It never ceases to amaze us how academics and pundits cannot be effusive enough about radical changes in IMF policy – well at least the policy papers it publishes. Looking at Ecuador and Nigeria, in reality it is still the neo-liberal beast terrorising the world. 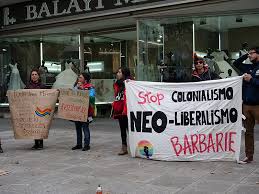 The leftist candidate Andrés Arauz took the lead in the first round of the presidential elections in Ecuador.  Arauz won 31.5 per cent of the vote, putting him about 11 percentage points clear of his nearest rivals. It was unclear who Arauz would face in the run-off. Indigenous leader Yaku Pérez and Guillermo Lasso, a wealthy ex-banker, were in a technical tie for second place, with Perez on 20.04 per cent to Lasso’s 19.97 per cent.  The second run-off round will be in April but if Arauz runs against the pro-business Lasso, he is likely to win; it’s less sure against Perez.

Ecuador is a small South American state with just 17m people right on the equator.  Ecuador’s main industries are petroleum, food processing, textiles, wood products and chemicals. The oil sector accounts for about 50 percent of the country’s export earnings and about one-third of all tax revenues.  The main oil company is the majority state-owned Petroecuador, which is still 37% owned by Texaco. Indeed, state-owned companies account for more than 80% of Ecuador’s oil production; the rest is produced by the multi-nationals: Repsol (Spain), Eni (Italy), Tecpetrol (Argentina’s state-owned company) and Andes Petroleum, which is a consortium of the China National Petroleum Corporation (CNPC, 55% share) and the China Petrochemical Corporation (Sinopec, 45% share). Ecuador is also the world’s largest exporter of bananas and a major exporter of shrimp

The first round result is an important blow against the machinations of imperialism in the region.  It is likely to end the rule of the last four years of pro-business policies adopted by President Lenin Moreno, deputy to former leftist President Rafael Correa.  Moreno reneged on Correa’s polices on taking office and instead locked up Correa supporters and imposed fiscal austerity, privatisations and other pro-business measures.

Between 2006 and 2014, under Correa, GDP growth had averaged 4.3%, driven by high oil prices and foreign investment.  So Correa was able to raise minimum wages and social security benefits significantly, partly financed by higher taxes on the rich.  But from 2015, GDP growth averaged just 0.6%.

As the Ecuador economy deteriorated, Moreno took an IMF loan accompanied by stringent austerity measures. The IMF had done the same thing as it did with the right-wing administration in Argentina, offering money in exchange for austerity and pro-business measures.  This provoked a massive protest movement in 2019 that eventually forced Moreno rescind some of the terms of the IMF package.  Moreno’s popularity plummeted and he decided not to stand in these elections.

Then came the COVID pandemic which hit Ecuador especially hard.  The Moreno administration’s callous incompetence, the weak, privatised and underfunded health system and the desperate need of many ‘informal’ workers to keep their jobs, led to disaster.  Ecuador is near the top of deaths per million globally. Indeed, Congress is impeaching health minister Juan Zavallos for mismanaging the COVID-19 vaccination program. The pandemic has paralyzed 70% of businesses and left 600,000 unemployed.

As elsewhere, the economic crisis due to the COVID-19 pandemic has disproportionally affected low income families, increased the poverty headcount and exacerbated income inequality. According to the World Bank, families in the bottom decile of the income distribution lost about 18 percent of their market income,while families in the top decile lost only a third of that.

Moreno’s solution to the slump was to take yet another IMF loan ($6.5bn), in return for the deregulation of the central bank and a hike in gasoline and diesel to world market prices.  He also took a bilateral loan of $3.5bn from the Trump administration in return for privatising a major oil refinery and parts of the country’s electrical grid and to exclude China from its telecommunications development. Moreno also responded with ‘emergency’ $4bn spending cuts included liquidating the national airline and closing embassies.

If Arauz wins in April, he will take over with foreign debt hitting $52bn.

Even after $7 billion in multilateral loans last year, Ecuador will need another $7.6 billion in new financing in 2021, according to an IMF report from December. And this assumes the country will agree to slash its government budget deficit to a target of $2.8 billion this year from $7.2 billion in 2020.  Let me quote directly from the IMF on its conditions: “Discretionary spending cuts which would include wage restraint (0.6 ppts of GDP) and moderation of capital spending (0.7 ppts of GDP). Together with savings from the ongoing fuel subsidy reform and the roll-back of pandemic-related spending when the crisis subsides”  And, “continued commitment to reducing deficits is needed to ensure sustainable public finances over the medium-term and lower the debt burden on future generations. Anchoring the medium-term path on the 57 percent of GDP debt limit in COPLAFIP entails a reduction of the NOPBS deficit by 5.5 ppt of GDP between 2019-2025, and of the overall NFPS balance by 5.3 ppt. Achieving these ambitious, yet realistic, goals requires a combination of a progressive tax reform— with permanent revenue yield of 2½ percent of GDP from 2022—and sustained expenditure rationalization.”

To achieve these targets, the IMF wants VAT hiked and measures to make the labour market ‘more flexible’  ie “maintaining the flexibility provided by those measures, such as shorter work weeks, more flexible shift and remote work arrangements, could support the labour market and the recovery.”

But Arauz says that he will not carry out the terms of the IMF package negotiated by Moreno. Instead, he wants to boost growth with a big rise in public spending, higher taxes and capital controls to stop money leaving the country.  Arauz reckons Ecuador can ‘grow’ its way out the crisis rather than adopt austerity which he reckons “is absolutely counter-productive for Ecuador’s growth and development needs”.  Rather than reduce the government budget deficit with a fiscal adjustment of 3% of GDP, Arauz aims to raise public spending by up to 1.5% of GDP with a major public works programme and put an end to privatisation.

How will this be done?  First, Arauz proposes a wealth tax. And second, he has suggested raising the tax on taking currency out of the country to as high as 27%.  Already wealthy Ecuadorians have spirited $30bn outside the country.  In contrast, the pro-business Lasso wants to phase out the levy, which currently stands at 5%.  And third, Arauz proposes central bank financing of government spending – in other words, ‘printing money’ – MMT-style.

Will these policies work?  The new president will have to address an economy that has contracted between 10-12%, a debt that is equivalent to about 60% of GDP (high by emerging economy standards) and a poverty rate of around 35%. Income and wealth inequality remains very high:10% of the richest population has 42.5% of income, while 10% of the poor has only 0.6% of income.

And there are big obstacles to recovery.  The government cannot devalue the currency to make exports cheaper because Ecuador has no national currency.  It is a dollar economy.  That means if the central bank is to fund government spending by buying government bonds or crediting government accounts, because the government does not control the unit of account, dollar reserves will have to be run down, although there is some room here as FX reserves are at a record high as the dollar has weakened. And Arauz plans to obtain loans from China to replace IMF funding.

The major obstacle will be the multi-nationals and the business sector in Ecuador.  Basically they have stopped investing since 2014.

That’s partly because of the drop in energy prices but also because it seems that investing for profit in Ecuador is not promising.  Energy and resources industries are highly capital-intensive, so in Marxist terms, the organic composition of capital rises significantly over time.  This drives down the profitability of future investment, which has especially been the case in Ecuador since the so-called emerging market crisis of 1998.  Only slowing down investment since 2014 has stopped profitability falling further.

So there is no incentive for the business sector to invest, particularly if oil prices stay low.  And over the longer term, the global fossil fuel industry faces serious decline.

Unless energy prices make a sharp recovery and/or the world economy leaps back in the next year or so, Arauz’s measures may well fall short of restoring growth and reversing the hit to working class incomes from Moreno’s policies and the pandemic.

Jacqueline Best – Security, Economy, and Our Addiction to Neoliberalism

An informal piece, but with some interesting insights Jacqueline Best is Professor of Political Studies, University of Ottawa & SPERI International Advisory Board member Cross-posted from the Website of Sheffield Political Economy Research Institute (SPERI) […]

Chris Saltmarsh, co-founder of Labour for a Green New Deal and post-graduate student in Politics at the University of Sheffield, analyses the various ideological conceptualisations of the Green New Deal. This article is cross-posted from […]