We normally do not post series, but this one is definitely worth the exception.

The Volcker recession of 1981-82 crushed inflation out of the economy, and presented economists with a new challenge: rather than high and rising inflation, their new dilemma was low and falling inflation.

This was a dilemma they were happy to have, and in fact, they took credit for it. They eventually labelled this period of not merely low inflation, but also (for a time) falling levels of unemployment—see the bottom chart in Figure 1—as the “Great Moderation”. Volcker’s successor from 2006 till 2014, Ben Bernanke, waxed lyrical in October 2004 that:

The sources of the Great Moderation remain somewhat controversial, but … there is evidence for the view that improved control of inflation has contributed in important measure to this welcome change in the economy. Paul Volcker and his colleagues on the Federal Open Market Committee deserve enormous credit both for recognizing the crucial importance of achieving low and stable inflation and for the courage and perseverance with which they tackled America’s critical inflation problem.

Then the Global Financial Crisis hit in August 2007, and that comfortable “pat on the back” explanation for low inflation and unemployment went out the window—or it should have. Inflation of 5% in 2006 collapsed into deflation of 2% in 2007, unemployment exploded from 5 to 10%, and the Central Bank inflation problem turned weird: having spent decades trying to get inflation down to their target of 2%, after the Global Financial Crisis they struggled to get it up to that target.

Until, that is, inflation blasted right past 2% in 2021, and reached over 8% last month. Faced with this unexpected shock, economists are wheeling out the tools that they think caused inflation to fall back in the 1980s: a sharp rise in interest rates to tame “inflationary expectations”. Having set its target interest rate at 0.25% since March 2020, it started hiking the rate in March 2022. It is currently at 1.75%, and most economists are expecting further hikes to 3.5% by the end of the year.

The mainstream economist Paul Krugman believes that the job of taming “inflationary expectations” is already done. He notes that the bond markets are forecasting inflation at 3.6% next year—well below the current 8.5%–and declares that:

the message we’re getting from the markets … is, don’t panic. Inflation is not, in fact, out of control, though the pain many consumers are feeling right now is. (“Why Markets Shrugged Off Bad Inflation News“, New York Times, July 14 2022)

I wish I could agree. But instead, I think inflation is “out of control”, and the cause has nothing to do with the chimeras of “inflationary expectations”, or other mainstream economics fantasies like NAIRU (the “Non-Accelerating Inflation Rate of Unemployment”), which the columnist Michael Pascoe satirised well in a recent column. 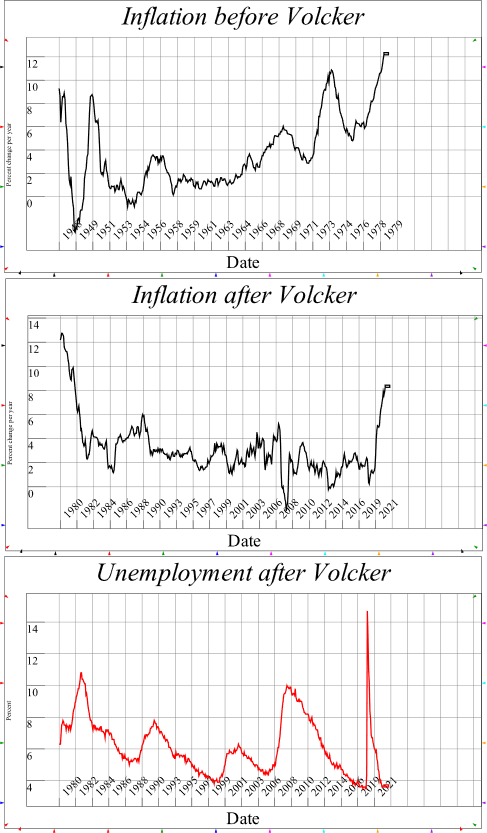 Instead, we can use a much more realistic approach by the Polish engineer-turned-economist Michal Kalecki, when he divided the factors that cause inflation into three categories:

We can pretty rapidly rule out rising wages as a cause of today’s unemployment: even with the tightest labour market in decades, wage growth is lagging well behind the rate of inflation.

The first factor, rising markups, is a potential factor today. Markups are fundamentally restrained by the degree of competition that manufacturers feel in the aggregate in their markets. When demand is buoyant, as it is now, markups are likely to rise. But that buoyancy is largely due to the enormous and necessary deficits that countries ran at the beginning of the pandemic. If governments reverse direction now to focus on “budget repair”—another Neoclassical chimera—then that buoyancy will disappear, and markups could fall.

But the key factor that makes inflation today totally different to inflation in the past is the last one: falling productivity. This is being driven by three primary factors right now: Covid, the Russia-Ukraine War, and declining productivity from fossil fuels and mining.

Covid-induced absences by critical staff are hampering production in the world’s factories, and lengthening the time it takes to ship goods from the world’s factory nations to its consumer nations (a division that has been created by the globalization of production over the last 4 decades). A Covid-affected workforce in the West is hitting transportation and services there, on top of the damage done to manufacturing.

Hypothetically, Covid could be a transient factor: there could be some miracle cure that removes it from the world, making a return to a “pre-Covid” environment possible. The same could happen with the War: Russia is the world’s number 1 wheat exporter, and Ukraine is number 5. The War has drastically reduced their exports and is driving food costs higher, but if it ends then perhaps their grain exports could resume.

But no such fantasy is possible for the next factor, which is brilliantly captured in the graphic shown in Figure 2, from Australian mining engineer Dr Simon Michaux. In the past, a tiny amount of energy was needed to mine oil and coal: the “energy return on energy invested” was huge. Equally, mineral deposits were rich, and easily processed using cheap energy.

We have drastically improved the efficiency with which we mine energy and process minerals today, but the physical constraints of much more difficult to mine energy, and much lower quality minerals, can’t be eliminated by ever-rising productivity. These two factors also multiply together: the energy is more expensive, and more of it is needed to process lower-quality ores into final goods. One problem amplifies the other.

Since this is also happening in the context of dangerous global warming, and fossil fuels still provide over 80% of our energy inputs, there is no possibility of replacing fossil fuels with renewables or nuclear in time to address these cost pressures.

The likely prospect, therefore, is rising prices, not because of wage demands or excessive markups, but because of a sheer increase in the cost of turning raw materials into finished goods.

Figure 2: Graphic created by Simon Michaux which illustrates the declining quality of energy and mineral resources over time. Reproduced with the permission of Dr Michaux (original is Figure 59 in “The Mining of Minerals and the Limits to Growth“). 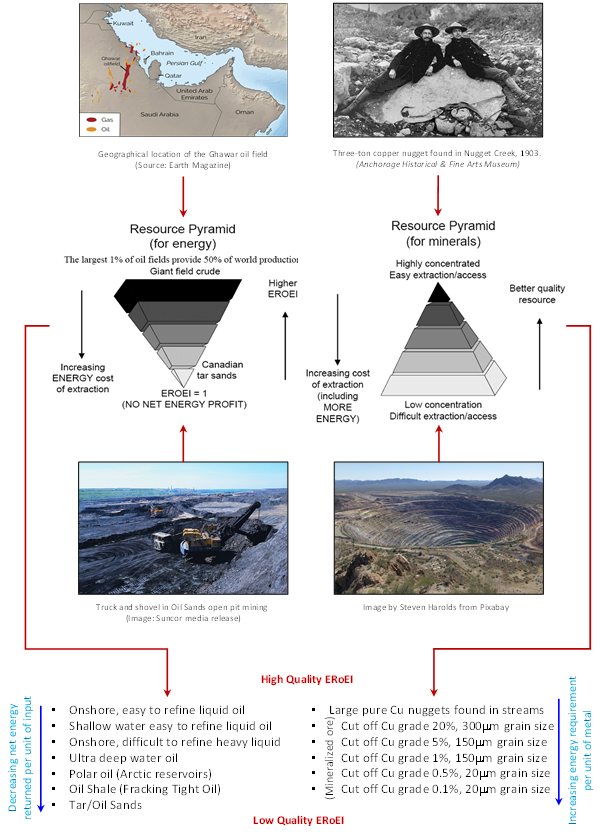 The Neoclassical “cure” for this disease—rising interest rates, and cutbacks on government spending—are as effective as 18th century medicine was against cancer. They will probably cause a recession, which may reduce markups and thus some inflation. But with real wages falling, rising unemployment on top of falling real wages could break the West’s already brittle social compact.

Inflation is therefore likely to be a permanent feature of society. The question is not how to eliminate it, but how to avoid it causing social breakdown.

Michael Roberts – The relative decline of US imperialism

The decline of the dollar means the decline of US hegemony. Michael Roberts is an Economist in the City of London and a prolific blogger Cross-posted from Michael’s Blog Photo: Wikimedia Commons CC BY 3.0 […]

Richard Murphy has published over 400 articles concerning the Green New Deal. We shall continue to post them on BRAVE NEW EUROPE until we finally have one – worldwide. Richard Murphy is Professor of Practice […]