On 4 May, the Popular Party, led by Isabel Díaz Ayuso, doubled their share of seats in a snap regional election in Madrid. Stuart J. Turnbull-Dugarte and José Rama react to the result, which also prompted the resignation of Pablo Iglesias, the leader of Podemos.

Stuart J. Turnbull Dugarte is an Assistant Professor in Political Science at the University of Southampton.

José Rama is a Lecturer in Political Science at the Universidad Autónoma de Madrid. 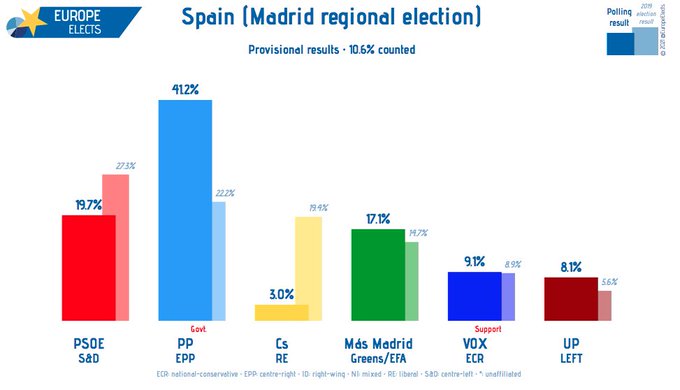 Despite Madrid’s persistently high infection and death rates, just over 3.5 million Madrileños opted to head to the polls on 4 May in one of the most polarising electoral contests in Spain’s richest and most influential region for years. The success of the right cannot be underestimated. The Popular Party (PP), led by lock-down sceptic Isabel Díaz Ayuso, doubled their representation in the region and, in tandem with Spain’s new populist radical right-wing party, VOX, Madrid’s right-wing bloc now enjoys a comfortable legislative majority. 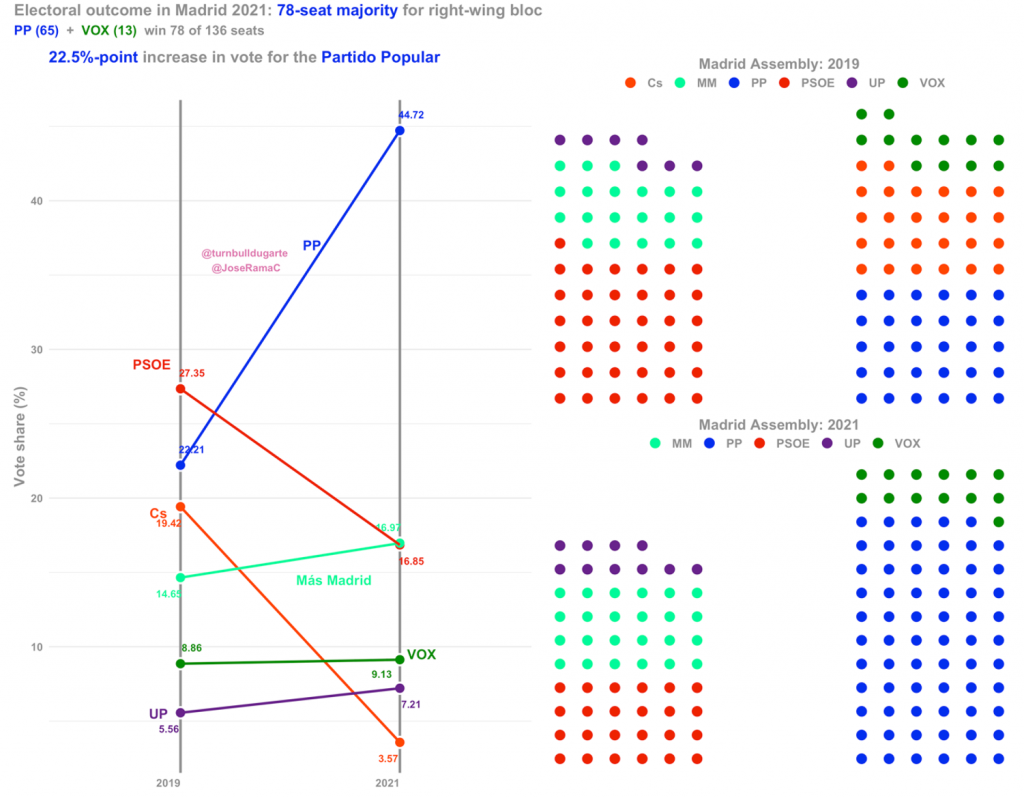 Source: Compiled by the authors.

How did we get here?

The catalyst for Madrid’s snap election was legislative manoeuvring that took place in one of Spain’s other regional governments, the region of Murcia, which had been governed by a coalition of the centre-right PP and the self-styled liberal party, Ciudadanos. This came to an abrupt and unexpected end when Ciudadanos presented a no-confidence motion against their leading coalition partner with the help of the Spanish Socialist Party (PSOE). Ostensibly as a response to the potential threat of a similar no-confidence motion in Madrid, Ayuso, the PP’s sitting President in Madrid, opted to call for snap elections just a few short hours after the news in Murcia broke on 10 March.

Despite claims that the elections had to be called against her will, many commentators were quick to signal the favourable pretext the events of Murcia afforded Ayuso, who had been rumoured to be unhappy with the constraints of coalition government and emboldened by favourable polling numbers. The situation offered a chance to restore the PP’s hegemonic position in Madrid, where the party has been in power since 1995.

In the last Madrid regional election in 2019, Ayuso led the PP to the party’s worst result in the region since Spain’s transition to democracy. Despite the PSOE winning the most votes in the election, the PP was nevertheless able to hold onto power by forming a minority coalition with Ciudadanos that was propped up by VOX. With Ciudadanos struggling in the polls, and the PP enjoying a surge of (localised) popular support based on Ayuso’s unique lockdown-sceptic policies, early elections were viewed as an opportunity to cannibalise the party’s junior coalition partner and potentially return Madrid to a single-party PP government.

Ayuso’s call for a snap election generated further political upheaval. Just five days after calling the election, Pablo Iglesias, Spain’s then Vice-President and leader of the national government’s junior coalition partner, Unidas Podemos (UP), announced that he would be leaving the national government and would lead his party’s ticket in the Madrid elections with an “anti-fascist” message that he argued was necessary to stop the radical right.

Beyond saving his party from the freefall experienced by Ciudadanos, who fell from 26 to 0 seats, Iglesias’ arrival also further entrenched the levels of polarisation present in the campaign. Ayuso portrayed the election as a binary choice between socialism and freedom, which she later updated to a contest between communism and freedom. This campaign slogan served as a framework for competition between the different political parties and ultimately ensured they were competing under the terms set by Ayuso’s polarisation strategy. Turning this simplified dichotomy back on the right-wing bloc and relying on the anti-fascist rallying flag that he used when joining the Madrid race, Iglesias painted the election as a choice between democracy and fascism. 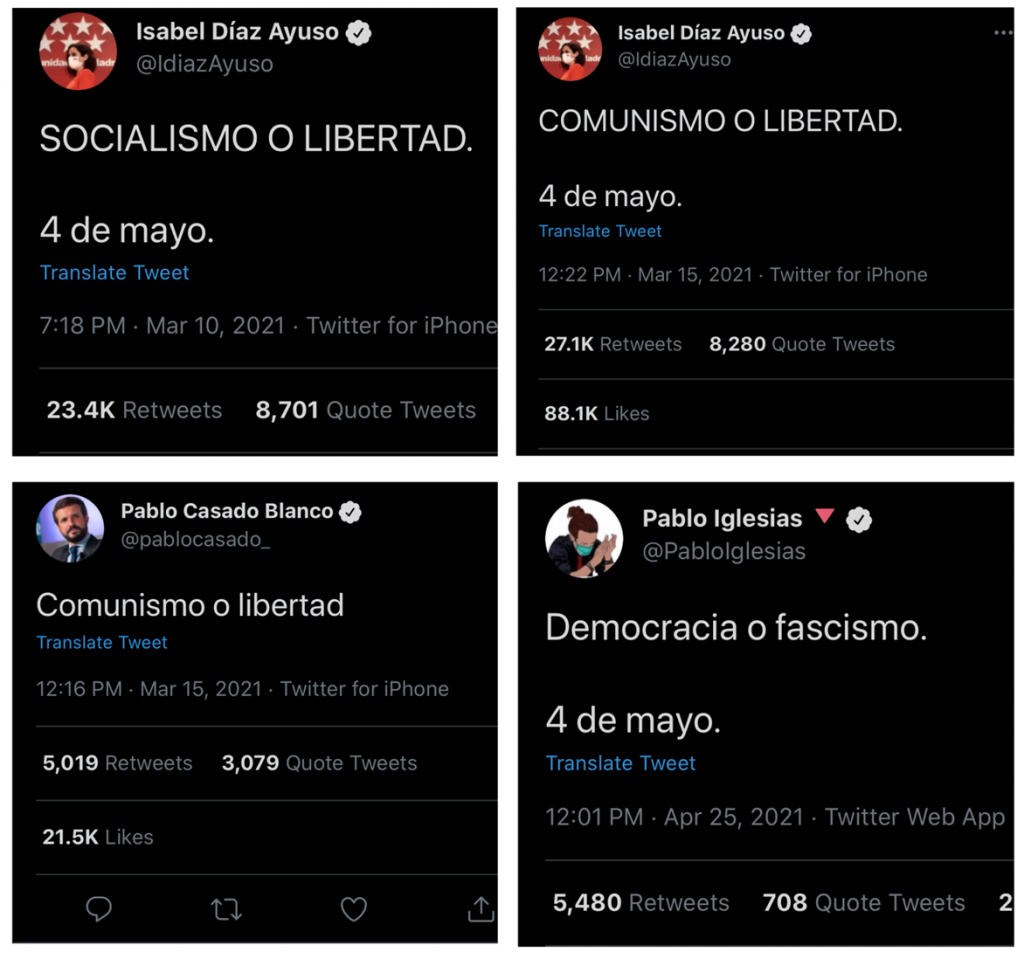 The campaign eventually became tainted by a number of death threats against, amongst others, Pablo Iglesias. The issue of death threats generated substantial controversy when, during a live radio debate between the candidates, Rocío Monasterio – the lead candidate for VOX – raised doubts about the veracity of the threats made against Iglesias, prompting the latter to walk out of the debate.

Why the result matters

VOX was undoubtedly one of the key victors of the election. Although in terms of votes and seats the party’s electoral fortunes remain largely static, their political fortunes have been transformed. Until now, VOX had positioned itself as a source of extra-government support for right-wing led coalitions in Madrid, but the result ensures the party is now likely to have substantive leverage over the PP. The political scientist Giovanni Sartori once argued that the relevance of a political party depends on its ability to extort concessions from its allies (blackmail potential) – the extortions sought by VOX are unlikely to be trivial.

The party’s policy pledges for Madrid are authoritarian and socially conservative, including calls for restrictions on abortions, the repeal of regional anti-discrimination laws, and the introduction of a parental veto on school lessons based on LGBT+ rights. Previously, Pablo Casado, the leader of the PP at the national level, has sought to move his party away from VOX, but the success of Ayuso – who has moved closer to the far-right – may prompt a reassessment of the PP’s national strategy.

Whether the success of the PP can be replicated beyond Madrid remains to be seen. There is now an established pattern in Spanish politics of competition between two distinct blocs, with the PP and VOX on the right, and the PSOE and UP on the left, alongside several regional variants. What remains unique to the Madrid case is the “Ayuso effect” which is defined by a largely populist anti-lockdown campaign that is unlikely to extrapolate to the rest of Spain or over a longer time horizon as the country eases its lockdown restrictions.

There is currently so much political upheaval in Britain that one might not be able to see the forest for the trees. The panic of the establishment is palpable. It is not only the right […]

Poland’s most popular and charismatic left-wing politician’s new initiative has a good chance of achieving short-term success in this year’s elections. But the grouping faces sharp criticism that it is dividing the opposition and playing […]