Any way you look at it, Amazon is a monopoly that penetrates into all our lives.

Taylor D.H. Rockhill is Associate Lecturer-Economics at the Institute for Management Studies Goldsmiths, University of London

Chances are pretty high you’ve consumed something from Amazon today, even without realising it. You may well have bought something from their online shop, with a hope for same-day, next-day, or Prime delivery. If you were hoping for Prime delivery, you might go and watch an ‘Amazon original’ on Prime Video. You might read a book on your Amazon Kindle, talk to Amazon Alexa, or listen to an audio book on Amazon’s Audible service. You might be one of the weirdos who listens to music on Amazon Music instead of Spotify or Apple Music. ‘Taylor’, you say, ‘I’m no sucker, I boycott Amazon and haven’t used any of those services’. To which I say, fair enough. I also ‘boycott’ Amazon and haven’t used any of those services. I use Scribd or other eBook services for my eBooks and audiobooks. I refuse to use any ‘AI’,1 since they’re mostly designed to harvest data on me for advertising purposes, and like the vast majority of music streamers on the planet, I’ve chosen the lesser of several evils and gotten a Spotify subscription. That said, despite my best efforts, there’s still a pretty good chance that I’ve put coin into Amazon’s coffers.

This is mostly because, like most modern people, I use the internet. The biggest investors into internet infrastructure, and the owners of most of it, are Amazon, Microsoft, and Google. About a third of the internet, including Netflix, relies on the Amazon ‘cloud’, professionally known as Amazon Web Services (AWS). One way or another, you’ve given Amazon money. It is inevitable. It is life on the modern internet. To use a modern computer is inevitably to give money to Microsoft, Amazon, and Google. 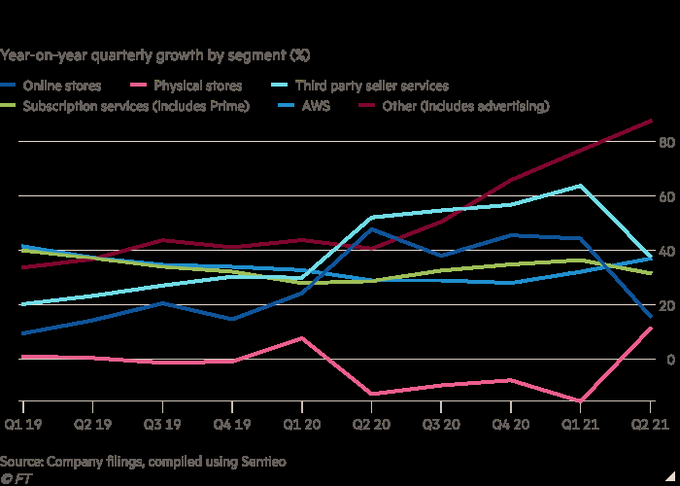 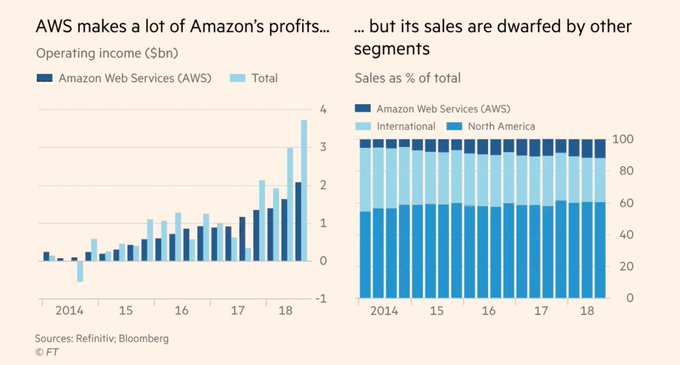 Increasingly, Amazon uses the money gained from AWS to cover losses in other divisions. Amazon retail, Kindle, and even Alexa aren’t the big profit makers you’d think. Nor do they need to be.

Let me diverge for a moment to introduce economic theory to our conversation. As ‘free market’ economic theory might want us to, we’ll pretend that we have a ‘perfectly competitive’ free market. Such a thing has never existed, and even Adam Smith was inherently sceptical that such an arrangement could ever exist. But in the magical, astonishingly influential world in which it is assumed to exist, neo-classical economists argue that there are two ways a firm could calculate price. One such way, in the ‘free market’ ‘competitive’ sense, is in terms of marginal cost (MC), wherein the change in price is calculated similarly to the price elasticity of the good produced:

That is to say that marginal cost is calculated by dividing the change in cost to produce by the change in quantity produced. If the cost of making the good goes down, it likely means that more of the good will be produced (assuming an increased demand for said good), and typically the cost of the good for the end consumer goes down as more and more of the good is produced. This typically happens over time as a result of scaling up production (as well as removing inefficiencies in production, supply, or shipping). Hence, why most goods become cheaper over time assuming a ‘perfectly competitive’ market.

Whilst the ‘honest’ capitalist charges based on marginal cost, the evil monopolist charges based on marginal rate (MR): instead of charging based solely on the cost of creating the good like the ‘benign’ capitalist does, monopolist charges exactly as much as they can before consumption diminishes. In some/many instances, the potential monopolist will intentionally undercharge the market rate in order to drive their competitors out of market, then once the competitors are bankrupt or non-existent, they will ratchet up the price as high as they can so as to maximise profit. Monopolists can only do this because they’ve taken the calculated risk that they can ‘out survive’ their competitors.

As mentioned above, Amazon doesn’t need you to buy a single Amazon product to survive. You’ve given Amazon money today just by using the internet. I don’t know about you, but I need to use the internet to get my work done. Just by being an employee of the University of London and two of its constituent schools, I’ve inadvertently given money to Microsoft and Google today. My work email is hosted by Google, which I checked on my Microsoft computer using my Microsoft Office 365 account. I would not be surprised at all to find out that Canvas/Blackboard use AWS. These are the infrastructural goods that have come to dominate the internet.

Herein lies the rub. The internet is a necessity these days. To remain relevant, to remain economically competitive these days, one needs the internet. In economic terms, this makes the internet ‘price inelastic’, bringing ‘cloud services’ to a place where even the most devout neo-liberalist/classicalist will admit there’s an economic case for nationalisation, or at the least, that dreaded government intervention. In other troubling news, Amazon has moved on to supply chain services as well, meaning that the internet isn’t the only infrastructure that Amazon has designs on. Terrifyingly, Amazon also has plans to become a defence contractor, which in the US would basically let Amazon run on the mighty budget of the US DoD.

For those of you who remember the shameful way the 2007/08 economic collapse was handled, this might bring the phrase ‘too big to fail’ back to mind. And you’d be well right to conjure that. Amazon has exceeded being a competitive ‘free market’ enterprise. It is a monopolist, joining the likes of Microsoft, Apple, and Google, and like so many monopolists, it no longer cares about you purchasing your goods. No, as Joseph Stiglitz points out, Amazon is in such a place that it no longer seeks the competitive customer, rather it extracts ‘rents’ from its citizens, like a despotic state owed tax. To boycott Amazon is to abandon a third of the modern internet, and even then, you’re assuming you can abandon Amazon’s advertising revenue. Which, frankly put, you can’t. You might as well be a delicatessen in 1920’s Chicago avoiding paying protection to Al Capone’s mob. You can certainly avoid Amazon, but it will be a great personal loss, and conceding access to the infrastructure necessary to make your business succeed. Amazon might even well be undermining your business, but you still need to pay them to maintain a presence on the internet.

The ‘free market’ cannot regulate Amazon from this vantage point. The free market, again as Stiglitz points out, necessitates two specific mechanisms to properly ‘self-regulate’ the way the neo-classicalists and neo-liberalists claim. Those two mechanisms are free entry and freedom to fail. Free entry means that a company started today can theoretically compete with Amazon equally as long as it offers the superior product (here abandoned by the immense infrastructural cost that might necessitate creating even a comparable product being a barrier to entry, especially with the consistent undermining of such freely accessible delivery infrastructure like the USPS and the Royal Mail). Equally important to the ‘free entry’ mechanism, in the neo-classicalist and neo-liberalist world view, is the freedom to fail. Should Amazon get a meaningful competitor, it is only fair that Amazon should fail, go bankrupt and out of business. The lack of faith I have in this important mechanism comes down to modern ‘too big to fail’ arguments. By this logic, Virgin Airlines should fail, as should most major British and American banks in the limelight of the 2007/08 economic collapse. The ‘bailing out’ of such corporations creates, as David Graeber describes, a ‘communism for the rich’, wherein the rich are given all the benefits of a ‘social safety net’ at the expense of the poor, who might actually need it. It is a hypocrisy, one rule for the wealthy, and another for the rest of us.

This gutting of infrastructure, led by lobbyists for corporations like Amazon, mixed with a lack of government investment in small business is exactly the crippling of both the ‘free entry’ and ‘freedom to fail’ mechanisms that allow Amazon to create the very monopoly that is increasingly robbing us of the high street, of the very free market ‘self-regulation’ that is so inherent to ‘free market’ arguments. Amazon will charge the marginal rate, that is, Amazon will charge less than profitable rates to drive competing high street shops out of business, and once monopoly is achieved, they can charge however they see fit. They can collect rents rather than profits. At that point, it will be at the immense loss of culture, diversity, and ideas that one can typically associate with giving everything over to an increasingly narrow group of corporations. Increasingly the arguments in favour of the ‘free market’ have become arguments for corporatist (economically fascist) control as opposed to that dastardly communist control. In their dire attempt to avoid ‘leftism/socialism’ as vaguely defined as they have left it, they have created the opposite of communism.

1 Calling Alexa, Siri, Cortana, or the Google Assistant ‘AI’ is a gross misuse of the term, and a bit too generous to the services in question.

Michael Mair – Gaining Momentum, Spreading Out – An Update on the UK’s University Strike

The university strike in UK is growing in strength and public support. In his second report (read the first here) Michael Mair brings us up to date as well as analysing the importance of this […]

Simon Bramwell – The shaping of History: THE PEOPLE VERSUS SHELL

On 22 April, XR co-founder Simon Bramwell and six other rebels appeared at the Southwark Crown Court, charged with causing 25K worth of criminal damage to Shell’s London headquarters.  In a historic ruling, six of […]