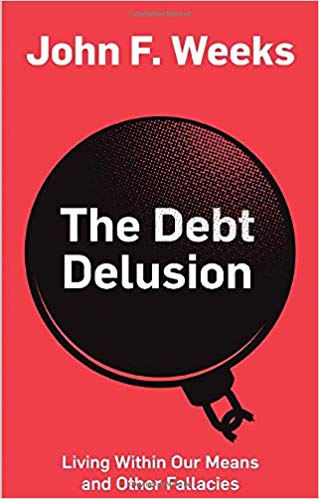 When Ha-Joon Chang exhorted: “We need an economic literacy campaign so people understand the language used by the ruling class”, he was probably thinking of books like John Weeks’ “The Debt Delusion” that has just been published by Polity. As the subtitle “Living Within Our Means and Other Fallacies” explains, this work sets out among other things to expose the Swabian hauswife myth popularised in 2008 by Germany’s chancellor, Angela Merkel, with regard to state budgets: “One should have simply asked the Swabian housewife. She would have cited the wise maxim: one cannot permanently live beyond one’s means.”

Weeks systematically and painstakingly dissects such populist arguments to which – as we were repeatedly told by governments – “There Is No Alternative” (TINA). Such arguments were used to pave the way for one of neo-liberalism’s most virulent and destructive political crusades: austerity. He writes the book for the non-economist with a patience and warmth that truly should make it accessible to a broad swathe of readers. Not only does he avoid using technical terms, he also does what he terms “jargon-busting”, explaining in simple language many economic terms that are often used by “experts” and politicians to obfuscate. The examples he employs are often taken from daily life, not from the economic textbooks.

In his book Weeks sets out to debunk six austerity “myths”:

1) “We must live within our means”

2) “Our government must live within its means”

3) “We and our government must tighten our belts”

4) “We and our government must stay out of debt”

5) “The way for governments to stay out of debt is to reduce expenditures, not to raise taxes”

6) “There is no alternative to austerity”

Austerity is not the devil’s work for Weeks. It is just an economic tool that needs to be utilised wisely, such as for reducing inflation. The same is true for deficit spending. But as Weeks makes clear: “Public sector spending and taxation are overwhelmingly about politics and only secondarily about economics”. Following the Great Financial Crisis of 2007, it was politics that prompted the wave of austerity, as we know, based on prescriptions by those same economists who had so egregiously failed to predict the crash, and rewarding the same minority whose greed had led to that calamitous event. A cosy affair indeed. Weeks presents us with the smoking gun.

The real beauty of Weeks’s book is its simplicity and irony, going from the political rhetorical to the practical. He commences his odyssey through the austerity myths with the claim by Margaret Thatcher in the 1980’s (Merkel stole the idea in 2008 for her speech, giving it a German touch) that government and household budgets function under the same premises. “She was half right for the wrong reason,” Weeks explains, because, just like governments, many households – and wisely so – “do not operate with balanced budgets”. Yes, even the Swabians, as obsessed with owning a home as the Anglo-Saxons, take out major mortgages. There are many good reasons for individuals to resort to credit, short and long term. Long-term credit often even reduces expenditure. The same is true for a government. As Weeks emphasises, most long-term credits for governments are used to purchase assets (capital spending), some of which even produce income (such as social housing), others that serve important functions for our societies (for example schools, hospitals, public transport). The money is not gone or wasted. It has simply been transformed into an asset or investment. And yes, governments also borrow short-term to cover emergencies, such as in a recession to combat unemployment and hardship.

A crucial element, as Weeks explains, is that most governments in high-income nations have strong currencies and a powerful central bank, can create money at will, and most importantly need not borrow in a foreign currency. Creating money is something no household can do, as it does not produce their own currency. Not only can a government create money, it can also borrow by selling bonds, even purchasing its own bonds (debt) via its central bank or other public institutions, saving by not having to pay interest. But bonds sold to the public have an important, if not crucial function, providing citizens, pensions funds, and banks with safe assets to invest in. In other words, government debt is not something negative, it is simply someone else’s asset that can have a positive role in the economy. Weeks takes the time to analyse the pros and cons of both methods of deficit financing. With regard to government deficits, even the Germans, those paragons of a balanced budget, have only had a surplus in seven of the past 24 years, and more than half of these were in the past four years.

Weeks continues just as methodically with Myth 2: “Governments must balance their books”. The two contentious issues he deals with are the formation of a “debilitating debt burden” and deficits resulting in inflation. He examines government expenditures, and on the other side, tax policies. The goal of taxation, Weeks explains, is not to have a balanced budget, but to manage the economy, balancing between excessive inflation and excessive unemployment. A government also has a political mandate regarding its finances, setting priorities in furthering the interests and well-being of its citizens.

While Myth 3, “We must tighten our belts”, concentrates on social benefits and their financing, especially with regard to the neo-liberal discourse concerning the demographic tsunami an ageing population, Myth 4, “Never go into debt” examines the difference between productive debt and other debt that results in disaster. Weeks begins with private debt, which has driven Western economies since the attack on workers’ wages began under Thatcher and Reagan. On the one side there is the predominant “secured debt”, backed by an asset, especially a mortgage, and on the other the “unsecured debt”, which one finds mainly among the less well-off in society. In other words, the wealthy take on debt to buy an asset to increase their wealth, the worker borrows to survive. Government finances have nothing to do with secured and unsecured debt, since a nation has not only its physical assets, but also a greater asset, its people. It is the management of this second element that especially concerns Weeks. A society that is well managed (infrastructure, education, health, environment, etc), and has its welfare – “the benign circle in which all benefit” – as its prioritised goal, will be able to deal with its debt.

Weeks make short shrift of Myth 5: “Taxes are a burden”. Starting with “Taxes reduce people’s ability to spend”, as if taxes do not provide value, Weeks moves on to examine who is taxed and how – in other words taxes as a means to promote political goals, such as reducing inequality or CO2. A government also decides to what degree essentials of society are paid directly by the individual or by contributions divided throughout society. He goes on to explain that we are following the wrong narrative: after massive tax reductions for the rich, resulting in increased public debt, the answer is not to reduce the debt (austerity), but to increase progressive taxes.

“Austerity: There is no alternative”, Myth 6, starts with the question of defaults by nations. Most of these were less developed countries that had borrowed in foreign currency and had thereby lost the ability to determine their own finances. Interestingly, as Weeks highlights, of the more recent cases of a default (resulting in bailouts) by developed nations, all three were in the euro zone: Greece (2012, 2013, 2015), Ireland (20139 and Portugal (2013),which he sees as a political, backed up with the usual myths dealt with in the previous chapters, not economic causality.

Weeks concludes by challenging TINA (There Is No Alternative) made famous by Thatcher. There are always alternatives, especially with regard to dogmatic, politically-motivated balanced budgets. This could be labelled Myth 7: “The narrative of neo-classical economists”. Of course Weeks concludes by listing and explaining what these alternatives are.

H. G. Wells wrote “Civilisation is a race between education and catastrophe.” With “The Debt Delusion“ John Weeks has made a major contribution to bringing economics to the people. Let us hope that they value this useful tool.

The Debt Delusion: Living Within Our Means and Other Fallacies by John Weeks

The Violence of Austerity – Edited by Vickie Cooper and David Whyte

Book Review by Mathew D. Rose There are relatively few books dealing explicitly with austerity, and most of those come at it from a macro-economic angle. Thus it is refreshing to find a book that […]

Following the Merkel/Macron idea of a  €500 billion stimulus no one is asking the most important question: how will Germans react? Trouble could well be on its way. Mathew D. Rose is an Investigative Journalist […]

Prime Economics Co-Director Jeremy Smith and PEF Council member John Weeks analyse the “bar room budget-brawl” between the Italian government and the European Commission, and argue that the Commission’s wrong-footed response threatens to strengthen the […]