The wheel does not have to be constantly re-invented, although there is always room for technical improvements.

The Workers Observatory  is a collaboration of gig workers and researchers, supported by the Scottish Trades’ Union Congress and the University of Edinburgh 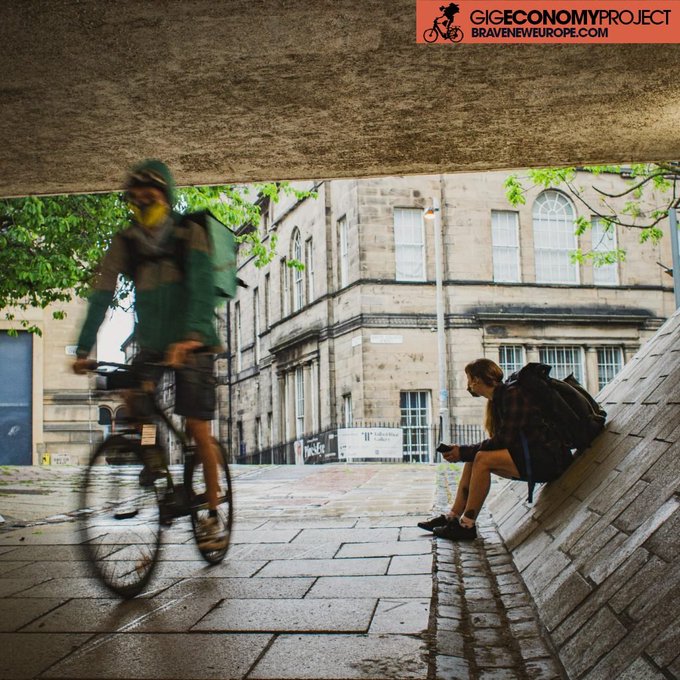 I am a takeaway delivery courier based in Edinburgh. I have been in this job for two years, and I have become aware of different issues couriers face while working, including variable and unpaid waiting times at restaurants, uncertainty of the availability of orders on a given day, constantly decreasing fees, and sudden unexplained terminations. I am very interested in how couriers could get organised and take actions to improve their working conditions – something that has not really happened in Edinburgh so far.

Over the last weeks, I attended an online webinar event called Strike School, led by Jane McAlevey. It featured six two-hour sessions with talks from Jane and various other organisers around the world. Four of the sessions featured breakout groups, either with other workers from the same union or region, or in randomly assigned international groups, in which we practised or discussed organising strategies.

The training focused on traditional organising techniques. As someone who works in a somewhat untraditional workplace (or rather, lacks a fixed workplace at all), I was very interested to see how applicable these methods are. Here are some of my thoughts.

A key skill, taught in the first session with an example exercise, was identifying the organic leader(s). These workers may not be aware themselves that they are leaders, but they are respected and followed by their colleagues. Bringing them to decide on taking action is crucial, as most of the workers in their workplace will usually follow them.
It’s difficult for me to say how useful this key strategy is in organising couriers, due to a very limited sense of community among couriers. The case is certainly different for small delivery companies, or in small towns or working zones. But working as a courier in Edinburgh, while I often talk to other couriers while waiting on an order, I have not made a single friend – all of my co-worker friends I have met through other means. Befriending co-workers is very difficult, as it is only possible to talk with other while waiting for an order. Furthermore, a lot of couriers work part-time, and there is a very high turnover, as many give up the job after a few months and are replaced.

It is likely that a lot of couriers who have been working for a few years full-time know each other, and there may be organic leaders among them. Based on my working experience, this key strategy would be difficult to utilise. But when couriers occasionally meet together, even just for fun, then organic leaders can be identified and involved in organising.

Structuring 1-on-1 conversations with workers in the right way can be very effective in persuading them that they need to take action. The method we practised has 6 steps, beginning with an introduction. The organiser then inquires about the issues that the worker is most concerned with. These issues are then used to agitate the worker. The third step is educating the worker on how they can take action to improve their conditions. Next, the organiser frames a choice: is the worker willing to take action, or are they willing to allow being subjected to the same, or worse, conditions. The organiser proceeds to inoculation by informing the worker of the potential risks of taking action but letting them know that they have the power to win if they are willing to fight. Finally, the organiser gives the worker a manageable task, for example to involve one of their friends into taking action. (This conversation structure is also applicable to other forms of organising. See more about 6-step structured organising conversations in this piece by Jane).

This method appears to be just as applicable for organising couriers as for workers in a more traditional workspace. From my experience talking to couriers, they are often angry about issues they face: decreasing delivery fees, uncertainty of the availability of orders on a particular day, long, unpaid waiting times at restaurants. Using structured organising conversations will likely be effective in getting workers to act. However, the limited interactions between couriers may hinder the effectiveness of this method. For one, couriers are almost always on the move, and talking to others is often only possible while waiting for an order to be prepared. This is unlikely to be enough time to complete all six steps. Furthermore, the lack of a sense of community may make couriers less willing to engage in any kind of collective action. And it is difficult to follow-up after such a conversation due to the lack of a fixed workspace.

A structure test is any action involving the workers in the organisation, which is used to test their level of commitment in a campaign. These actions start with a small task, e.g. asking everyone to wear a badge, or a certain colour of clothing, and then escalate, including actions such as singing a petition. If enough workers (a majority was the goal taught in this training) participate, the campaign is ready to move on to the next stage. The end goal of a campaign is usually a strike, and structure tests are important to assess if a sufficient number of workers are going to participate. Structure tests are accompanied by wall charting. Wall charts are used to record the actions that all workers in a certain workplace have taken. They are usually displayed in a common area, for all workers to see and use. This allows workers to keep track of which of their colleagues are involved and try to recruit the ones who are not.

Structure tests would likely be very useful in organising couriers. For some actions, e.g. wearing a badge or a sticker, assessing how many workers take a certain action may be difficult in the lack of a fixed workspace, though a full-time courier who knows quite a few of their colleagues may be able to record participation over a day. In terms of different actions, boycotts of certain restaurants are a good example of action short of full strike, which can put a lot of pressure on the restaurant and the delivery. Successful boycotts have been carried out in other cities in the UK. Wall charting, on the other hand, would be more difficult. It is pretty much impossible to have a list of all couriers working in a zone or a city, and no public spaces to display the wall chart. An alternative would be mapping the acquaintances of workers more heavily involved in the campaign, and expanding that as more workers join in.

Millions of Europeans in temporary, part-time or bogus self-employed contracts can only find insecure and badly paid jobs, despite the healthy economic climate. That is the price of deregulating labour markets, Investigate Europe reports. This […]