The conflict with platform companies striving for monopolistic markets and worker exploitation is ongoing. Support the platform workers’ strikes.

Thomas Klikauer teaches at the Sydney Graduate School of Management at Western Sydney University, Australia. He has over 600 publications including a book on the AfD.

Meg Young is a Sydney Financial Accountant and HR Manager who enjoys the outdoors, good literature, foreign music and in her spare time – works on her MBA at WSU, Australia. 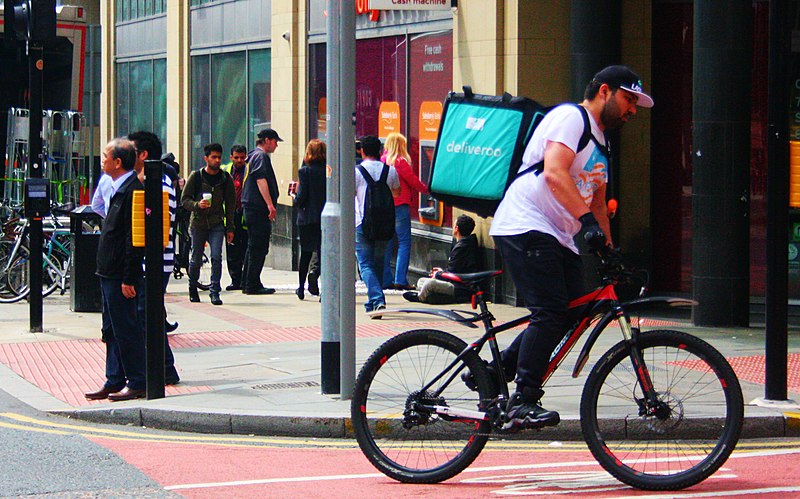 The advent of Tim Berners-Lee’s newly coded Internet has not only given us Google with 86.9bn site visitors per month, wearables transmitting our heartbeats to profit making so-called “health” corporations, and Apps like Tinder, the Internet has also changed our cities and how we order the food we eat. It converted our cities into what is known as smart cities – a technologically and modern urban areas that use different types of electronic methods to manage traffic, assets, resources, and services like online food deliveries.

Part of the rapid growth of smart cities has been a seemingly very high demand for online work. This is done through online platform companies such as, Uber, Lieferando.de, Deliveroo, etc. To some extent, the growth of platform capitalism coincided with two developments: on the one hand, it grew by relying on a more and more services-oriented urban population at the upper incomes scale using online services.

On the other hand, workers are lured by clever corporate marketing by selling the supposed goodies of working for a platform company. It promises substantial advantages of working for an online delivery company. As so often in the labour market, there are plenty of riders but a few companies. The Coronavirus pandemic of 2020-2022 only provided a welcome opportunity for a handful of delivery oligopolies to become even more dominant.

Today, online companies such as Deliveroo, Uber Eats, and Glovo are valued at billions of dollars. They also employ tens of thousands of delivery riders in well over two-hundred cities across all continents.

Through their algorithms, such platform companies are dictating workers to which restaurants to drive to, to which houses to deliver to, which routes to take, when they are needed – and when not – and how fast they should deliver a package or food.

Set against what became known as Despotism on Demand of platform companies, new forms of digital activism among workers have sprung up. This enabled workers to organize themselves using platform messaging services such as WhatsApp. Through those, online riders exchange information and ideas about rampant job insecurity, social isolation, and the next to complete lack of workplace safety.

Management likes to frame platform companies through the neoliberal ideology of entrepreneurialism. This means hyped-up individualism, the self as an appendage of corporate capitalism, cranked up super-flexibility for companies, not workers, etc. Yet, workers soon realized that there are stark information asymmetries between online riders and corporate management weaponized through algorithmic management.

Workers at Deliveroo also realized that they are not alone. The workforce of the global juggernaut of platform capitalism measures over 150 million people worldwide. In the USA and in many parts of Europe, this workforce represents up to about one-third of the working age population. Among those, Deliveroo is a substantial player employing over 2,000 employees directly. This is its invisible office workforce.

However, an utmost visible to virtually anyone on a city road, the ubiquitous Deliveroo box carried by its bike workers clearly indicates, these are workers employed by Deliveroo. Beyond that, employees have to ride – just as told by Deliveroo’s algorithmic management – to over 140,000 restaurants, globally.

Riders going to those restaurants are almost all male, as a whopping 93% of all Deliveroo couriers in Great Britain are men with 73% aged between 18 and 34 years old. In other words, the classical Deliveroo worker is a young man. Yet, in a pro-business survey, 84% of them claimed that they were happy working for Deliveroo.

Meanwhile, Deliveroo continues to claim that the average earnings for couriers are around $16.- (£12/hour in the UK). The corporation does this despite various reports showing that its employees earn as little as £2/hour. At the same time, the Bureau of Investigative Journalism found that their boss was raking in a whopping £500 million or $670 million US dollars. This is how inequality and the growing gap between the rich and the rest is made.

Exploiting riders pays handsomely. Revenues of Deliveroo have increased exponentially since its launch – between 2016 and 2019, the company’s revenues grew six-fold. This was rather easy to achieve since Deliveroo is part of an oligopoly of a handful of corporations dominating the online food delivery market. Worse, online food delivery seems to control a whopping 10% of the entire food services market.

For any corporation, it is helpful (read: extra profits) to exploit the weak and indeed Deliveroo’s workforce consists of an inexperienced junior workforce. Workers tend to be young while often working part-time. Meanwhile, its UK moped riders are often older migrant workers. Adding to the relentless exploitation meted out by corporations is the fact that many workers do not speak the local language.

Such workers are particularly exposed to the whims of Deliveroo’s management equipped with software aided Weapons of Maths Destruction – algorithms. It is not uncommon to see that along with algorithmic management comes a hefty dose of algorithmic bias. This is a rather common experience for ethnic minorities. Many UK food couriers have been subjected to managerial discrimination by a well-known company: Uber Eats. Its facial identification software might indeed be racist. It proved incapable of recognizing some faces ﬁring ethnic minority workers as a consequence.

Beyond all that, flexible exploitation – known as ﬂexploitation – adds an additional layer of precarity for many workers. In some way, this precariat with insecure, over-worked, and precarious employment is exposed to what is known in the UK as zero-hour contracts. This is the neoliberal idea that an employer is not obliged to provide any minimum number of working hours to an employee. This is indeed one of the more evil forms of neoliberal labour market insanities. It gives online corporations ultimate flexibility while workers receive income unpredictability on an unprecedented scale.

Of course, major cities are the preferred location for corporately-engineered and algorithmically- controlled gig work. Cities offer high population density. This allows corporations to expand the service sector deep into an urban economy. In addition, there are plenty of high-salaried employees in crisis needing to secure some form of income. Finally, there are also new labour market entries – young workers whose work aspirations for freedom and ﬂexibility can easily be exploited by platform companies.

Yet, such platform companies and platform capitalism deliver “some” goodies. It has advantages for consumers and workers on the higher end of the labour market who are working, for example, in home offices. And it has, of course, financial benefits which go disproportionally to corporate owners and stockholders. While for those at the receiving end – vulnerable workers – there is next to no long-term value in slogging away for a platform company.

For them, the work process is simple, repetitive, and strictly defined by algorithmic management. Riders’ cycle to a zone centre which is an area with busy restaurants where the corporate App lights up to a courier who is confined to waiting. Once the corporate App has been opened, workers log in and select available for orders. Next: the corporate algorithm takes the rider’s location into account and checks his availability to distribute orders. On busy days, riders wait just a few seconds. On other days, riders are forced to wait for hours on end.

Once an order is picked up – sometimes after a considerable wait time – riders would rush as fast as possible taking almost any risk just to try to maximize their earnings. Of course, there is no sick pay to protect riders in case of an accident, nothing to help to replace a broken phone or bike – or even a leg. Online employment is designed as being self-employed – a neoliberal dream. It offloads virtually all risks onto employees while transferring handsome profits to platform companies.

Working for platform companies often means being in an intimidating and algorithmically-controlled working environment. Set against platform companies’ dehumanizing work environment, is the ability of workers to organize themselves using online means. Online communication allows users almost simultaneously to gather and share news, discuss workplace issues, and even mobilize others. Over the past years, WhatsApp has had a positive influence on the activism of online riders working in platform companies.

Set against the overwhelming power of such platform companies including their algorithms, is the grass-root character of worker organized via WhatsApp groups. In an Orwellian twist and unlike Space Odyssey’s HAL 9000, corporate Managerialism selected an innocent looking name for its algorithmic management system: Frank. Yet, behind Deliveroo’s euphemism lurks the reality of despotic management with algorithmic management disempowering riders through a managerial imposition of constant and consistent form of surveillance.

Beyond that, algorithmic management also works through the deliberately designed imbalance in access to the data that such corporate algorithms generate. The most common strategies used by riders to fight algorithmic management are: a) rejecting orders coming from afar; c) snubbing orders from restaurants known for long waiting times; and, c) refusing to deliver in dangerous areas.

Online riders have also been exchanging stories of fatal stabbings, car crashes, and other violent incidents directed against couriers that have become rather common in some cities. Helping these is a widely circulated Twitter hash tag #slaveroo, which is a clever wordplay on Deliveroo and slavery.

One WhatsApp group was set up by Deliveroo couriers to organize and coordinate strike actions. Later it helped workers in resisting Deliveroo’s algorithmic management. In the end, Deliveroo’s signiﬁcant power based on information asymmetries is an inherent feature of the company’s ability to control couriers. Yet, riders are capable of overriding these managerially-invented asymmetries.

Michael Roberts – Work or Toil in the Pandemic

When robots constitute a perfect substitute for labour, workers and robots compete directly on the labour market, holding wages down. As a consequence, automation leads to a declining labour income share. Michael Roberts is an […]

The true game of climate diplomacy is for the actors in different countries who favour transitions to find ways to help each other. To make each other’s tasks less difficult. Simon Sharpe is Director of […]