COP26 is a critical moment in human history, says Tina Rothery and Rupert Read of GreensCAN. The summit holds the potential to avert the climate crisis, but this can only occur if significant policy changes are made. The pair lay out 10 tests that they believe COP26 must meet, and outline further action that citizens can take if these are not met.

Rupert Read teaches Philosophy at the University of East Anglia 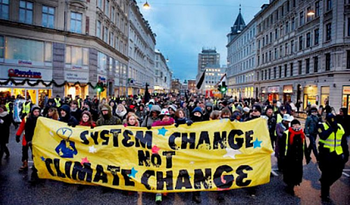 COP26 is critical to human history. The summit, originally scheduled for 2020, was supposed to be the most important COP since the achievement of the Paris Agreement, and was supposed to be about the implementation of that legislation. However, it was postponed due to the Covid-19 pandemic. This left a year without COP, a year we can ill-afford to have lost. Thus, the 2021 summit is more important than ever.

The post-Covid reset will determine the economic parameters of the entire decade, henceforth deciding whether humanity is set on a path towards mass ecocide and self-destruction, or towards recovery. This gives the summit even greater significance. Will humanity take advantage of the temporary emissions reductions of 2020 and the new ways of working? Or will it revert to business-as-usual, and miss this last chance?

What follows are a set of basic demands on those attending COP26. This is not a wish list, this is the bare minimum. If these modest demands are not met, then COP26 will have failed us. This is the absolute bare bones of what ‘the international community’ must agree upon this autumn.

The summit should be about policies and their implementation, not simply about agreeing on a new set of targets. The details will be for the different governments to sort out, but what is needed from COP26 is a shared commitment to action in a whole series of areas, such as transport, energy, and agriculture.

Since human-created climate change is actually economy-created, the climate crisis requires major changes to the world economy. Therefore, we need commitments from governments that they will act in accordance with COP26 decisions, as well as targets for institutions such as the IMF, World Bank, and World Trade Organisation, all three of which are still outside the UN system, including being open to the possibility of replacement by new bodies.

These three points outline a bottom-line set of requirements for the summit. We are asking governments to agree to pursue these policies alongside their economic ‘recovery’ plans, putting the focus principally at the national level. Measures at the global level will be needed to support that – through World Bank & IMF lending policies; WTO rewriting of trade rules; and, overarchingly, renewal of IPCC & UNFCCC processes.

1. An unprecedented investment in genuinely renewable energy. There must be no false solutions – no large scale monocultural afforestation/biofuels or BECCS; no buck-passing to future generations via gambles with Solar Radiation Management; and no planned ‘overshoot’ of climate targets. The shift to renewables must be accompanied by an unprecedented investment in improved energy efficiency in buildings and machinery; a shift in the burden of taxation, incentivising the purchase of greener items; and a systematic and integrated approach to the greening of cities. COP26 must prioritise renewables and deprioritise fossil fuels.

2. A thorough shift in transport away from petrol and diesel vehicles, and most crucially, away from aviation. This shift should not be a like-for-like substitution; this would not create the paradigm shift that we need. Instead, there needs to be a big shift towards active travel, public transport, and a substantial effort put into reducing the need to travel and move goods. The coronavirus pandemic has shown the vulnerability of carbon-profligate global supply chains; to reduce such vulnerability, a presumption should be established in favour of more localised/shorter supply lines. The transport sector is of such fundamental importance to the climate, being the sector where emissions are still, the pandemic aside, rising, that it needs special attention at the summit.

3. A huge free transfer of technology and funding to global South countries. The annual $100bn of funding and finance pledged at COP21 must be delivered, and fast. Debt-forgiveness and debt-for-nature swaps need stepping up. Unprecedented levels of funding – not finance – need to be made available to compensate for the losses and damage caused by climate-related disasters. Without these measures at minimum, the global South, and especially climate-vulnerable countries, will lose confidence in the summit.

4. A programme for transformational adaptation to dangerous human-triggered climate change. Defensive ‘incremental’ adaptation alone is no longer sufficient, and is, in fact, counter-productive, falsely encouraging us to believe that a mildly reformed version of the status quo can be retained. Defensive adaptation tries to keep the current, broken system going; transformational adaptation acknowledges the need for system change. This includes the restoration of natural biodiverse flood defences such as mangroves and wetlands, worldwide. Again, this needs unprecedented levels of funding from countries that have benefitted most from the fossil era. As a bare minimum, the UN acknowledged ‘adaptation gap’ in funding and finance must be closed.

5. Planetary boundaries should be taken seriously – there should be hard caps on resource use and pollution. These caps should only be softened if there is truly no alternative, and they should be precautionary, in line with the Stockholm Resilience Centre analysis. Growing awareness of the climate crisis has led to a growing awareness of planetary boundaries – governments should respond to this by using ‘beyond GDP’ indicators to guide policy.

6. Companies should be legally required to disclose climate-related financial risks and/or dependence on fossil fuels, incorporating these into their financial accounts so that investors can see clearly the risk of their assets being stranded. Some countries already have such requirements, but there needs to be a more general following of this example, led by COP26.

7. Trade arrangements should be rewritten in order to facilitate a green transition – member states should agree to champion such changes through the institutions such as the WTO.

8. ‘Net-zero’ schemes via ‘negative emissions technologies’ should only be permitted where there is genuinely no alternative. ‘Net’ must never be an excuse for weak targets. Admirable efforts to draw down carbon emissions must not become an excuse for inaction.

9. Targets should be established for the reduction of industrial and intensive agriculture, especially in the case of animal farming. Agriculture and food can no longer be the elephant in the room; COP26 must show leadership in this sector, whose substantial methane and carbon emissions have been soft-pedalled on for too long.

10. Methods of allocation must ensure that women; children and young people;  small businesses; and marginalised communities, including peasant and indigenous communities, share adequately in the benefits of any green government investment packages, or, at minimum, are not harmed or displaced by them. Crucially, too, they should be included amongst those making these decisions. Meanwhile, learning for sustainability should be prioritised in formal education systems. COP26 attendees must shift towards prioritising the development of ‘ecological intelligence’ as a goal for all learners and provide all professional educators with the skills required to nurture it. Children and young people are our future; they, as well as other marginalised groups, deserve to be placed much closer to climate-relevant decisions and deserve to be helped maximally to cope with the damaged world that adults are bequeathing to them.

To repeat; these 10 measures are not an ideal-world wishlist; that would be much longer and more demanding, and would include a much stronger set of proposals to achieve climate justice. These demands are the bare bones of what needs to be agreed upon and set out for immediate action this year, rather than being kicked into the long grass of 2050, 2060, or even 2035. Respect for science and the Precautionary Principle demands a spirit of shared urgency, a quasi-wartime mobilisation.

Anything less will be failing the world, and failing future generations, for whose sake we need to act now.

If these 10 tests are not met, that would license a truth-forceful response by citizens, whose futures and children are on the line. We will be in Glasgow on 12 November, at the end of COP26, and we invite you to join us then. If the tests laid out above have been met, then the occasion will be one of some celebration. If they have not been, then we two, GreensCAN and many more will be there to mark and narrate the occasion, and to urge COP delegates to stay longer until they get the job done.

This is a moment that will endure in history. We urge you to join us.

Richard D. Wolff – Many Terms That Are Frequently Used to Describe Capitalism Simply Don’t Hold Up Under Scrutiny

What really lies behind the term capitalism? Richard D. Wolff is professor of economics emeritus at the University of Massachusetts, Amherst, and a visiting professor in the Graduate Program in International Affairs of the New […]

“Why Not Default? The Political Economy of Sovereign Debt” by Jerome Roos

In Why Not Default? The Political Economy of Sovereign Debt, Jerome Roos explores why sovereign defaults have been an undesirable last option by systemically unpacking the structural characteristics of the contemporary debt market. This is a fresh and […]