If there are to be progressive changes in European society, unions will play a major role. Following decades of neo-liberal policy they are seriously weakend. To make matters worse, many tend to be reactionary, expecially with regard to questions about the enivronment and growth. Thus such a series as planned by SPERI and Open Democracy are welcome:

“A new mini-series of blogs, published by SPERI and openDemocracy, will present new ideas for how unions can organise and engage with the workforce.” 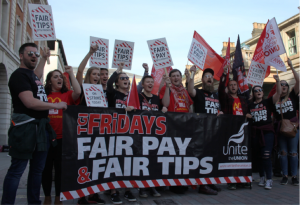 “A trade union is like a bundle of sticks. The workers are bound together and have the strength of unity … A worker who is not in a union is like a single stick. She can easily be broken or bent to the will of her employer”.

The bundle of sticks story was often told by Mary Macarthur, the founder and leader of the National Federation of Women Workers, a pioneering all-women trade union that existed between 1906-1921. In 2018, 100 years later, the UK workforce is increasingly comprised of ‘single sticks’.

The UK has near full-employment but trade union membership has declined from over 13 million in 1979 to around 6.2 million people today in a total workforce of 32 million. 2017 saw the overall number of union members increase slightly but this followed the biggest annual decline in 2016 since records began. Despite this year’s increase the proportion of the workforce in a union fell to 23.2% in 2017, from 23.5% in 2016. Gavin Kelly and Dan Tomlinson have outlined the stark demographic challenge facing unions as older union members retire and aren’t replaced. They argue that just to stand still and halt the decline will require an 80% rise in union membership among the under 35s by 2030.

In parallel to declining membership there has been a decline in collective bargaining coverage. Just 15% of private sector workers are covered by a union-negotiated agreement. The absence of agreements denies workers the chance to have their say, collectively through their union, on issues including pay and working conditions but also about ways to improve the business model and increase productivity. Lone voices are easier to be ignored than many.

These huge challenges for unions are bound up with structural shifts in the labour market that are making working life more individualised for many. Platform and ‘gig economy’ companies load risk onto the individual worker by classifying them as independent contractors and not as employees. This decouples work from hard-won employment rights like the minimum wage, sick and holiday pay, and means individuals often have no choice but to accept all the work they can. In more traditional low-pay industries like retail or warehousing – where union membership tends to be low – similar dynamics are at play. Hours are allocated by algorithm and the widespread use of flexible, casualised contracts means work isn’t guaranteed.

New forms of non-standard, individualised employment risk changing people’s expectations about work. Unless challenged, today’s controversial working practices could become the norm tomorrow. And if that work takes place in a non-unionised environment then it will increasingly change people’s expectations about their (in)ability to have a collective say and any influence over their working life.

None of this is news to trade unions and contrary to some commentary they are not standing still. Around the world and in the UK the labour movement is challenging unfairness and insecurity at work and developing innovative and collaborative responses.

In Australia, United Voice, a large established trade union, has just set up Hospo Voice, a digital union for workers in the low-paying hospitality industry. IG Metall, the German Metalworkers Union, along with the Austrian Chamber of Labour, Austrian TUC and the Swedish union Unionen have established faircrowdwork.org which provides information for people working on online ‘crowdwork’ platforms about unions and their legal rights. Couriers in Austria working for Foodara in Austria, an app-based restaurant delivery service, formed a works council with support from Vida, a transport and services trade union. UK, Dutch and Swiss seafarer unions have merged to form Nautilus International, a cross-border union to represent workers in a cross-border industry. Nautilus has since negotiated a global three-year pay deal with Shell International on behalf of workers from 49 different countries.

In the UK, Community union and Indycube have partnered to provide representation and support for freelance and independent workers. In the courts, unions, led by GMB, have continued to secure victories to provide employment rights for workers in the gig economy. And as it marks its 150th anniversary, the Trades Union Congress (TUC) has just announced WorkSmart, the outcome of innovative research to find new ways to organise young workers.

At the recent Unions 21 national conference the Sheffield Political Economy Research Institute (SPERI), in conjunction with openDemocracy, organised a session to add to the conversation about new ways unions can organise and engage workers. For the rest of this week we will publish articles from the session’s speakers that set out their ideas.

Whilst unions have always developed new ways of organising, some things don’t change. SPERI’s research for Unions 21 suggests that the most effective way of reaching potential young members is through face-to- face communication at work, and ideally through colleagues who are already union members. Collective organising happens person-by-person through individual conversations. This was as true for factory workers 100 years ago as it is for couriers, academics, or warehouse workers today.

When there are fewer union members in workplaces and when work is more individualised this becomes increasingly hard, but there are plenty of examples of how and where unions are responding. Today word can spread quickly, and campaigns and best practices from around the world should be learnt from and tested. Not everything will be a success but the key is experimentation and evaluation followed by investment in what works. For the union movement to renew and build up the ‘bundle of sticks’ it will require blending old principles and new ideas and techniques.