Politically not all that much has changed for the Catalans under Spanish domination, be it under fascism or liberal-democracy

As expected, Spain’s Supreme Court today (28 September) ratified the sentence barring Quim Torra – president of Catalonia – from public office. It is the first time in forty years of constitutional democracy in Spain that the president of what is termed an “Autonomous Community” has been barred from office. The official reason given is that he broke the rules regarding the exhibition of political propaganda during an electoral period, refusing to immediately take it down after receiving a Central Electoral Board ruling. He alleged that it was an act protected by his right to freedom of expression.

Many observers, however, place this debarment in the wider context of generalized repression against the Catalan independence movement. Indeed, at present there are numerous trials under way against Catalan officials who organised the 2017 Independence Referendum (other than the convicted Government ministers themselves), police chief Trapero and other officials, the members of the Referendum’s electoral board and many others involved in peaceful protests, amongst whom are hundreds of activists who blocked the A7 motorway at the French border (11/11/2019) or Dani Gallardo, a Madrid-based Andalusian still in pretrial detention facing the prospect of a six-year sentence for participating in a pro-Catalan demonstration in Madrid. 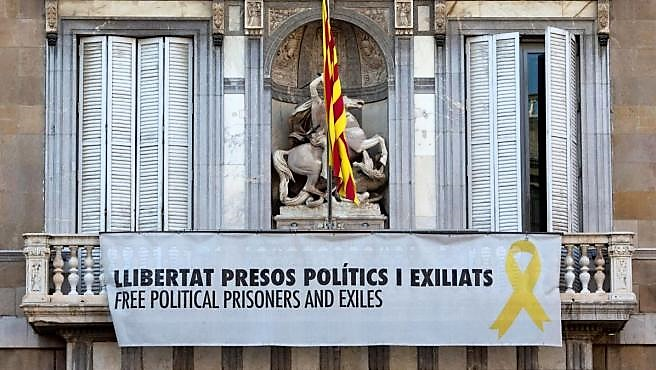 The “political propaganda” that president Torra displayed consisted of a banner placed on the balcony of the Catalan government containing the famous yellow anti-repression ribbon and a phrase calling for the freedom of the Catalan political prisoners. Many say this can in no way be seen as “electoral interference” because it cannot be associated with any one political party. It is rather a non-partisan political demand of as general a nature as many others exhibited at election time on a wide range of official buildings throughout Spain without any judicial action of any kind being taken. At the last elections, president Sánchez himself was involved in an incident of a similar nature on using the official presidential residence as a scenario for electioneering, and got off with a €500 fine. But of course, he is not a Catalan president.

Quim Torra i Pla was invested 131st President of the Generalitat of Catalonia in May 2018 despite occupying a lowish position on Carles Puigdemont’s Junts per Catalunya (JxCAT) list which won the right to name a presidential candidate at the December 21, 2017 elections. This came after the Constitutional Court (TC) had issued an unprecedented ruling to block Puigdemont’s candidacy as well as overriding the Catalan Parliament law that would have enabled him to take office without being physically present (he was in exile). At the same time, two other alternative JxCat candidates were also vetoed – one by not being allowed out of prison to attend the session (despite the verdict of the UN Working Group on Arbitrary Detention), the other being imprisoned during the investiture session itself – before president Puigdemont suggested plugging for what was known as “Plan D”. It was a question of finding a candidate willing to act as president of the Generalitat during the provisional period marked by the conditions imposed by the Spanish State.

At that stage, Catalonia was threatened with continued suspension of her autonomy under article 155 of the Constitution. The candidate had to be someone close to Puigdemont with no party membership but with a clear republican discourse and an ability to allow Puigdemont to take on a symbolic and representative role of his presidency in exile. The editor and writer Quim Torra was the candidate chosen, a true republican fully acquainted with the heterogeneous nature of the Catalan independence movement. He was also a person seen with sympathy by the other Catalan nationalist parties, ERC and CUP, and having no connections with Pujol’s discredited Convergència party. The anti-capitalist CUP also identified with his lack of ties with economic liberalism.

A law graduate from Barcelona’s Autonomous University, Quim Torra had worked for years in a private company before moving to Switzerland, where he worked as an insurance company executive for several years. He returned to Catalonia with the intention of writing press articles and political essays. He created a publishing company specializing in literary journalism and humour and began an initiative to recover the Catalan literary and journalistic tradition of the Second Republic and exile periods. Torra is also a member of the Catalan National Assembly and Òmnium Cultural, a Catalan association created in the 1960s to promote the Catalan language and spread Catalan culture.. In 2015, after Muriel Casals left the presidency of Òmnium Cultural to stand as a candidate for the triumphant Junts pel Sí candidature to the Catalan Parliament, Torra briefly took over the presidency of the 140,000-member association before resigning in favour of Jordi Cuixart, imprisoned a couple of years later. But what made him go into politics was the decision of former president Mariano Rajoy to dismiss the Catalan Government and dissolve the Parliament of Catalonia, in October 2017. This pushed Torra into joining the JxCat list led by Puigdemont as an independent candidate.

It would be as short-sighted to attribute Torra’s debarment to a casual slip-up as it would to ignore the fuller political intentions behind the Spanish judiciary, arguably one of the most politicized in the EU. Some accuse Torra of wishing to “play victim” with his debarment in order to obtain electoral gain. But this is unlikely because, over and above his foreseeable debarment, he was known to be standing down as a candidate many months ago. On the other hand, it is obvious that at least one section of the independence movement, as advised by cunning lawyer Gonzalo Boye – who has so far won all his cases in Europe against the Spanish Supreme court – has its own strategy. By acting as it does, it would appear to be trying to lure the mammoth of the spiteful Spanish judiciary out of its cavern and into the quagmire of the European courts. For the irregularities which the Spanish courts have incurred in must be put down to the spirit of partiality and thirst for revenge that inspired them.

To start with, Article 47 of the EU’s Charter of Fundamental Rights can be seen to have been clearly violated as regards a flagrant lack of impartiality. For instance, the pre-trial investigation was conducted by a judge – Carlos Ramos – who is known to have been appointed by a political party directly involved in the prosecution. Torra’s expected appeal before the EUCJ will also gain weight when it is seen that the judge presiding over the court made a statement to the press to the effect that the trial was quite unnecessary because the case against Torra was “so obvious”. He also praised the Central Electoral Board for having called for the withdrawal of the banner. Something very similar may be said about judge Joaquin Elías, a member of the court that condemned president Torra in Catalonia’s High Court (a body run according to Spanish law). He too appeared on 13TV attacking the Catalan government days before the trial. To these arguments one may add that the body ruling Torra’s suspension (the one that fined Sanchez €500) has no real capacity to suspend a regional president because it has a merely administrative role to play. But it is doubtlessly the very disproportionate severity of the sentence (18 months of debarment and a €30.000 fine, plus costs) that does most to disqualify it. Moderate jurists such as Martin Pallín have insisted that a simple case of disobedience, normally sanctioned with a symbolic fine, should never lead to the debarment of a democratically elected president. Few doubt that he is being condemned because he is Catalan. The European courts will one day have to decide if there was justice or revenge in this suspension.

Monday 28th’s ratification of the sentence against president Torra will be yet another traumatic episode in the recent history of Catalonia. One cannot forget that, of her last twelve presidents, seven suffered exile, five were imprisoned, several were exposed to large fines and one executed 80 years ago next October 15th (Lluís Companys). The last three presidents were removed from office and one vice-president, Oriol Junqueras, has so far served three of his thirteen-year conviction for “sedition” on having called a referendum. This debarment is clearly not going to pacify things. Indeed, Politico’s website (19/9) spoke of a state of “convulsion” if the sentence was confirmed by the Tribunal Supremo, a court which is unrelenting in its conviction of Catalan independentists. Now elections will have to be called – they were due in 2021 anyway – although there are doubts about the exact procedure for calling them. The Madrid government, though apparently seeking to appease ERC – with talk of pardon for the Catalan political prisoners – will most probably try and show who is boss, as Rajoy did when he suspended Catalonia’s autonomous regime with the sui generis application of the Constitution’s Article 155 in October 2017. What is certain, though, is that there is little chance that the negotiation table intended to “solve” the Catalan question – a step which Puigdemont and JxCAT are most skeptical about – will be called before the elections are held. President Sánchez will not only have had awkward president Torra removed, but will also have another excuse for putting off any form of agreement with the Catalans, a people he denies any form of national status to. Will Spain ever learn that by barring and persecuting her presidents, so many Catalans will never feel Spanish?

Branko Milanović – What are the Stakes? A short Text on US Elections

As the US election nears, we shall try to present some pieces analysing this event for a European perspective. Branko Milanović is an economist specialised in development and inequality. His newest  book is “Capitalism, Alone: […]

Sven Giegold warns that the Coronavirus pandemic has been used as a pretext by powerful lobbies to weaken and delay a European Green Deal. Sven Giegold is a German Green MEP Cross-posted from Source Picture […]

An outstanding interview with insights into the current economic and political situation in Italy Sergio Cesaratto teaches European monetary and fiscal policies at the University of Siena. He is author of Heterodox Challenges in Economics […]