By Vicki Squire, University of Warwick 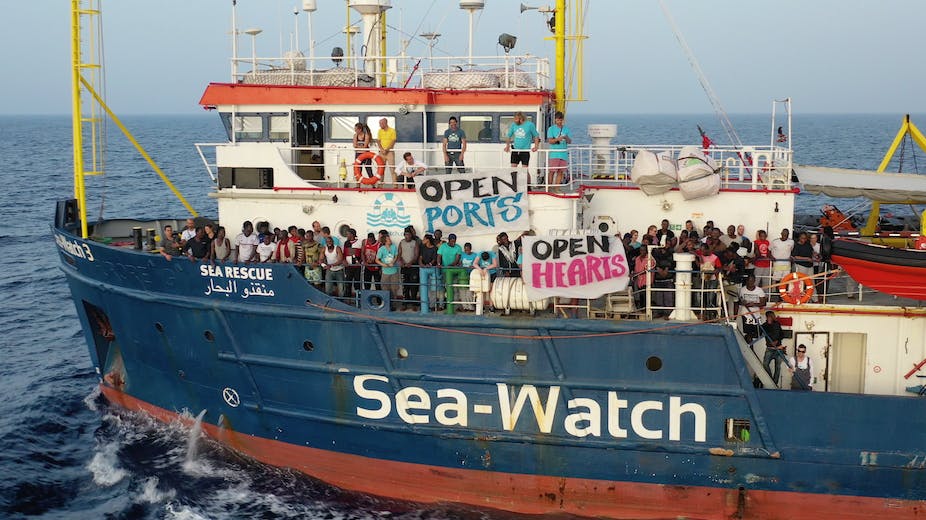 Carola Rackete, captain of the Sea-Watch 3, was arrested on June 29 for docking the search and rescue vessel in Italy without permission. This is the latest confrontation in a longer battle launched by the Italian government against non-governmental organisations who rescue people in distress in the central Mediterranean.

In early June, Italy passed a decree that puts vessels such as Sea-Watch 3, which is owned by the German NGO Sea-Watch, at risk of up to €50,000 in fines for bringing people rescued at sea to Italian ports. This followed a decree in December 2018 which abolished humanitarian protection for those arriving to Italy and led to many being made homeless.

The situation for those providing search and rescue in the Mediterranean is getting persistently more difficult. On June 26, the European Court of Human Rights refused a request from Sea-Watch 3 to disembark migrants in Italy. With 40 traumatised people as well as the crew remaining on board since a rescue at sea on June 12, Rackete decided that enough was enough and it was time to take matters into her own hands. She entered the port of Lampedusa on June 29 without permission, trapping a patrol boat in the process, which she later said she’d apologised for. Rackete was subsequently arrested.

Despite knowing that she would be at risk of arrest, and despite knowing that the ship would also be at risk of seizure, Sea-Watch made a statement stressing that Rackete “enforced the rights of the rescued people to be disembarked to a place of safety”. There has been a groundswell of support for Rakete since her arrest, including from German President Frank-Walter Steinmeier who criticised Italy for dealing with the situation in terms that were “unbecoming” of an EU member state.

While it may seem that far-right politicians in Italy are driving the criminalisation of people on the move along with those seeking to support them, the problem is actually more far-reaching. It isn’t only in Italy where activists are being criminalised, but also in Greece and elsewhere, as hostile policy environments impede civil society groups from providing support to those seeking peace and safety. It is a 2002 EU council directive that provides a legal framework for prosecuting those who facilitate the unauthorised entry, transit and residence of people travelling to the EU.

In 2018, at least 104 people across the EU were investigated or formally prosecuted for providing people on the move with humanitarian assistance. A recent study highlighted various ways in which solidarity groups are policed in order to prevent their support for those migrating. This ranges from anti-smuggling operations through to restraining orders designed to prevent activists travelling to sites in which they can provide people with support. In Hungary, a legislative package passed in 2018 renders those providing support to people seeking to claim asylum at risk of prison.

While the European Commission took legal action to challenge Hungary’s policy, Italy’s actions have remained largely unchallenged by EU authorities so far. In the summer of 2017, Italy began plans to impose a code of conduct on search and rescue vessels. Despite the controversy that this raised, the EU supported Italy’s actions. When Italy decided to renew its “friendship” with Libya in the summer of 2018, enabling joint action on migration, again the EU lent its support. At the time, the EU was actually already pursuing a programme to train Libya’s coastguard.

The EU’s inaction in the face of Italy’s increasingly hostile agenda ultimately amounts to complicity with the arrest of search and rescue activists such as Rakete. The EU priority is to advance a policy agenda that prevents people on the move from arriving in the EU – regardless of where they end up. Yet as Giorgia Linardi, a legal expert working with Sea-Watch argues: “Libya is not a safe country.” It’s for this reason that Sea-Watch maintains that rescue at sea must be “protected and defended”, and that Linardi affirms: “Forcibly taking rescued people back to a war-torn country, having them imprisoned and tortured, is a crime that we will never commit.”

Italy’s actions create a difficult situation for the EU and its member states, who are under increased pressure to accept those people who search and rescue groups rescue at sea. Yet as UN human rights experts stressed in their condemnation of Italy’s bill to fine search and rescue vessels: “The right to life and the principle of non-refoulement (not sending people back) should always prevail over national legislation or other measures purportedly adopted in the name of national security.”

It is high time that EU leaders spoke out collectively against the persecution of activists such as Rakete in recognition of the importance of international legal obligations such as Article 98 of the UN Convention on the Law of the Sea. She is not the first captain of a civil society vessel facing prison. The EU must not continue supporting a situation in which people are at risk of imprisonment for operating vessels under the belief that they have a rightful duty to help any person in danger at sea.

Bobby Banerjee, City, University of London It’s a glorious afternoon at a luxury resort in Egypt, with six swimming pools leading to a lovely little stretch of beach on the Red Sea. A salsa aquatic […]

Annamaria Simonazzi – The Eurozone in Crisis

In the corona crisis the EU is failing at every opportunity, economic and political. Annamaria Simonazzi is Professor of Economics, Sapienza University of Rome Cross-posted from the Institute for New Economic Thinking What did the […]

While many of us are shocked by the rapidly increasing  consequences of climate breakdown, it is critical that we organise to counter the economic interests that are responsible for this disaster. Rupert Read teaches Philosophy […]