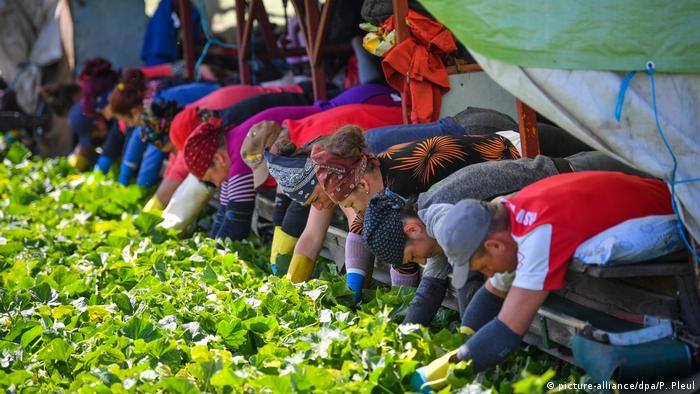 Seasonal migrant farmworkers have been one of the most vulnerable worker categories during the pandemic and yet essential for food security. In Germany, an ongoing proposal by the Government seeks to extend the duration of the general exemption of seasonal migrant workers from social security requirements, threatening to uphold workers’ vulnerability and further exacerbate precariousness.

Essential workers without social security: the discrepancy between words and actions

This time last year, the German asparagus harvest was threatened to go to waste as travel restrictions were to prevent seasonal migrant farmworkers from arriving at German farms and fields. Despite the clear risks to the health of the harvesters, the government had decided to fly in 80.000 seasonal workers from Europe’s eastern periphery to the rescue of German asparagus, gherkins, strawberries, and the rest.

While this has earned seasonal migrant farmworkers the “essential worker” status (systemrelevant in German), and the images of crowded airports in Romania and Bulgaria at a time when all travel was at a standstill shocked the German public, while not much has improved for the workers in reality. On the contrary, one year into the pandemic, things have gotten worse than before. Seasonal migrant workers now not only have to do the old strenuous work in the fear of falling victim to the next infection outbreak, but a draft bill by the Government seeks to further strip them of social security rights (including health, unemployment, and old age insurance).

Last year, the time span during which seasonal workers are exempted from the general social security requirements was extended from 70 to 115 workdays, while in the ongoing draft bill CDU and SPD have settled for a social security exemption period of 102 working days this year. Food security and safety are the justifications for the extension offered by the German Federal Minister of Food and Agriculture. As employers usually replace the seasonal workers after 70 days to avoid paying social security contributions, the extension of the exemption is meant to incentivise them to keep the same workers over a longer period. This would then arguably limit the overall fluctuation of seasonal workers and prevent further spread of the coronavirus.

While the importance of safety is self-evident, what is not, is that it should be done at cost of workers’ social security rights, depriving them from proper health, unemployment, and pension insurance. This paradox, however, of extending seasonal migrant workers’ exemption from social security coverage, right after establishing their essential role in maintaining food supply during a global pandemic, is enabled through an unfortunate combination of the legacy of neoliberal labour market regulation and the structurally weak bargaining position of seasonal migrant farmworkers.

In the early 2000s, when Germany was dubbed the “sick man of Europe” due to a low economic performance and high unemployment rates, a series of labour market “flexibilization” reforms (also known as the Hartz reforms) were introduced to stimulate economic activity and boost employment. The Second law on modern performance on the labour market (“Hartz II”) has introduced reforms concerning the so-called marginal employment –  the infamous ‘mini-jobs’. There are two categories of mini-jobs, the 450-Euro mini-job (§ 8 (1) Nr. 1 SGB IV) and the short-term employment (kurzfristige Beschäftigung, § 8 (1) Nr. 2 SGB IV). The Hartz II changes have substantially reformed the former and have consolidated the latter, both through law and the accompanying discourse on the benefits of flexible labour markets.

The incongruity between the legal framework regulating marginal short-term employment and the present reality of seasonal migrant workers is at the core of the ongoing debate on the social security exemption for seasonal migrant workers. Since its origins in the Social security code (SGB IV) of 1977, the short-term marginal employment has been completely exempted from the general social security requirement under two conditions. First, any short-term marginal employment had to be limited to a maximum of 50 workdays per year (the SGB Revision of 1979 has reduced the originally set 75 workdays), and second, it could not be the worker’s primary employment activity (berufsmäßig ausgeübt), but only a supplementary source of income. In 2014, shortly prior to the introduction of the national statutory minimum wage, the maximum duration was extended to 70 workdays (three months) per year.

The rationale behind the social security exemption for short-term marginal employment rests primarily on neoliberal economic logic, assuming that such an exemption would create incentives for employers to temporarily employ workers, making easier the integration of long-term unemployed into the labour market, and at the same time, to offer flexibility to workers (in theory targeting high-school and university students during summer break, pensioners etc.). The condition that it cannot be one’s primary employment implies that those in marginal short-term employment have already made other social security arrangements (as students, pensioners, through their main employment or through family insurance schemes). Based on this logic, prior to the pandemic, seasonal work of up to 70 workdays per year (three months) was almost automatically treated as short-term marginal employment and has thus been exempted from the general social security requirements. As the exemption applies to everyone in a marginal short-term employment, including nationals, the framework is in compliance with equal treatment requirements of the EU legal framework (free movement principles, the Social Security Regulation No 883/2004 and the Seasonal Workers Directive 2014/36/EU).

The main problem with applying this framework to seasonal migrant workers is that it is falsely based on an assumption that the criteria for short-term work are satisfied, while in fact, they are often not, or at least are not easy to prove. Two aspects of the reality of seasonal migrant work in Germany render this framework particularly ill-suited. First, the requirement that the short-term employment should not be the primary employment (berufsmäßig) and should only serve as an extra source of income (Hinzuverdienst) is often not fulfilled. Second, this implies that the assumption that workers are integrated in a social security system elsewhere is equally inaccurate. While the current social security exception might partly work for some earlier realities of cross-border seasonal migration, such as the example of students or Polish teachers who used to work on German fields as seasonal workers during summer breaks, most seasonal migrant workers that are now coming from Europe’s Eastern periphery are often unemployed. Due to the sizeable wage and living costs discrepancy between East and West they manage to secure a significant part of their annual income through seasonal work.

However, failure of control and enforcement, but also politics turning outright a blind eye to this reality, maintain the assumption that the conditions that qualify seasonal migrant work as social-security-free short-term employment are fulfilled in principle. Thorough and systematic controls of A1 forms that certify whether social security for a seasonal migrant worker is being paid elsewhere are not in place, nor can the authenticity of the forms be easily proven. The difficulties of enforcement and genuine certification of social security payment in the case of short-term labour mobility in Europe is too well known from the experiences with and numerous studies on East-West posting of workers in various sectors.

The overall weak position and bargaining power of seasonal migrant workers makes it difficult to confront the current pursuit by the Government. Many factors determining this structurally weak position are by now well-known and stretch from the short-term nature of the employment to racialisation of seasonal migrant labour, language barriers, physical isolation of farms and accommodations, to the high dependence on the employer for basic needs during mandatory quarantine and due to overall Covid-related movement restrictions. As new and related specifically to the pandemic come the rejection and the stigma that seasonal migrant workers face upon return in their home countries, being perceived as spreaders of the virus. No less important are the daily struggles with irregularities concerning outstanding payments and unjust deductions, continuously reported by counselling services for migrant workers, but the majority of which remain undocumented due to a lack of systematic monitoring and control.

Notwithstanding the vital importance of the collective agreements in force, short-term union membership offers, and the successful information campaigns by unions and migrant workers support networks, the short term nature of the seasonal work and the structural vulnerabilities pose difficulties for collective action and organising strategies. Aside from the legal framework and institutional structures that regulate seasonal work, seasonal migrant workers’ structural weakness is further buttressed by the division of labour in core-periphery Europe. The core-periphery dynamics in Europe sustains the treatment of the seasonal migrant worker as a disposable factor of production as each round of East enlargement meant a labour market expansion towards new precarious regions. The recent news about the hiring of 5.000 seasonal farmworkers from Georgia for this year’s harvest demonstrates that when groups of workers become “expensive”, employers could just search for workers further East.

The currently proposed extension of the exemption comes both as a result and as a reinforcement of the existing structures forging the vulnerable status of seasonal migrant workers. Aside from the constant struggle to find an entry point in any social security system, old age poverty after many years of seasonal farm work (some farmworkers have been returning for 20 years) could be another concerning result of the current framework’s failure to reflect workers’ reality. However, the reality analysed above does certainly not mean that political action is rendered powerless by existing structures, but rather that structural problems require structural solutions. Instead of aiming to further exclude seasonal migrant workers from social security rights, which fosters financial insecurities and future old-age poverty in already impoverished regions, the German government should invest its energy in improving the often unfavourable working and living conditions of seasonal migrant workers, as well as strengthen the enforcement structures of regular monitoring and controls. Only such actions can ensure that seasonal migrant workers’ basic rights such as minimum wages, accommodation standards, proper social security, and protective measures do not remain as decorative as their “essential worker” status.

Robert Tombs – Perry Anderson: A Devastating Indictment of the EU

The prominent Left-wing intellectual Perry Anderson has just published a comprehensive and crushing indictment of the EU from its beginnings to the present. Robert Tombs provides a summary for those who might balk at reading […]

It is always ood to leave the economic anaylses of Greece and austerity (see today´s article by Sergio Cesaratto) and to see what the situation on the ground looks like. Haris Malamidis and Kostis Roussos […]