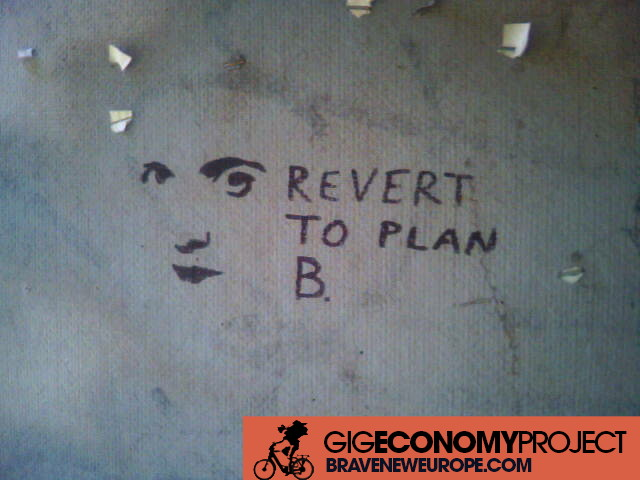 Every action leads to a reaction. The legal and regulatory victories achieved by gig workers and unions in Europe this year over worker status have been important breakthroughs, but platforms were always going to respond by adapting their operations in such a way that complies with the law while reducing any additional costs to an absolute minimum. There is evidence from across Europe that the solution they are beginning to settle on is sub-contracting.

The sub-contracting plan B

The sub-contracting model has proliferated in the neoliberal era and is now well established in public services, construction and other sectors where the primary beneficiary of a person’s labour outsources the responsibilities for that labour to another firm. Sub-contracting creates new layers of bureaucracy between the worker and its true employer, each with their own cost pressures which are then pushed further down the line. Sub-contracting, then, is associated with low pay , precarious conditions and a complete lack of transparency for the work and reduced accountability for the employer.

Take Uber in the United States. Before California’s AB5 law was crushed by Proposition 22, Uber was actively looking at a sub-contracting model as a plan B, whereby they franchise out their app to the traditional local taxi firms they have been busy running out of the market these past years. Drivers would then be employees of the taxi firm, not of the platform. Uber’s algorithm squeezes the taxi firm’s revenues, and the taxi firm then squeezes the worker’s wages.

As Brian Callaci has written, “the problem of corporations using legal mechanisms to avoid responsibilities to workers is much larger than the gig economy”. It is estimated that two times as many workers in the US operate through sub-contracting, franchises or temporary agencies as are ‘independent contractors’.

A 2009 European Commission study on sub-contracting in Europe found 3.7 million small and medium-sized enterprises operated as sub-contractors, 17 per cent of all SME’s in the EU. It’s likely that number has grown considerably since then.

Once Spain’s ‘Riders Law’ was finally at the point of agreement between the employers’ association and unions in March, the big digital platforms asked Yolanda Díaz, minister of labour and the new Vice-President of Spain, “for two things”, according to ‘La Información’: “first, that the companies be allowed to subcontract services, something that is included in the final text; and second, a vacatio legis of nine months.” The companies didn’t get nine months, but they were granted an extra month to adapt their business models before the legislation took effect.

Over one month later, and there is already evidence that instead of providing riders with contracts directly, “they are hiring through other intermediary companies”, according to the UGT union.

“As far as we have been able to learn, one of the platforms is forcing its riders to provide petrol invoices in the name of ‘Closer Logistics’, which shows that they are still working for the same platforms, but through intermediaries,” the UGT adds.

By placing into the text of the Riders Law that subcontracting services was permissible, the Ministry of Labour appear to have helped the digital platforms avoid taking direct responsibility for their workers.

Uber Eats has just moved into Germany’s food delivery market in recent weeks, in an attempt to knock Just Eat off its perch.

“Uber Eats’ couriers in Germany will be employed by fleet management companies, similar to minicab firms, who are contracted by Uber,” The FT reports.

“Uber will pay its German partners for each order. It is then up to those fleet managers how they pay their employees. A similar model was already put in place at its food delivery business in Geneva after a court case in September last year, but Germany would be a far larger test for its profitability,” the report adds.

What is interesting is that there is no current German legislation which forces Uber Eats to operate in the country on the same basis as Uber already does. The company is making a pro-active decision to adapt its business model, pre-empting legal and legislative defeats which will surely follow from the verdict of the UK Supreme Court, among others.

“This doesn’t bode well for delivery workers,” Neils Van Doorn of ‘Platform Labor’ writes. “Technically employed by Fleet partners, the same problems of precarity and low wages persist. This shows that when you treat Uber as a low-wage employer, they will act as one. Migrant and minority workers still suffer.

“We need regulations that counter and abolish predatory subcontracting practices and risk offloading across low-wage labour markets, including those in which platforms offer a slightly less shitty alternative to people struggling to survive.”

The Gig Economy Project has previously reported on the outcome of a recent report commissioned by President Emmanuel Macron into bogus self-employment. The Frouin report proposed a ‘wage portage’ model, whereby a holding company or a co-operative would employ workers who had been working for a digital platform regularly for six to 12 months. In effect, sub-contracting.

The proposal has been opposed by trade-unions in France, with Arthur Hay of the CGT stating that it would “create a barrier between the employer’s responsibility and the worker”, and that platforms would continue to “impose the rate and run the market as they wish”.

Macron accepted the recommendations of the report but it’s likely that the European Commission’s Directive on the regulation of platform workers, the first draft of which is due later this year and which will be binding on all nation-states, has now superseded any plans for new French legislation.

Portugal is the one country in the EU which already has an umbrella company system in the platform economy. Maria da Paz Campos Lima, a PhD in sociology and expert on platform work, has said that while there had been progress since the sub-contracting model was introduced, there was also problems. The umbrella companies have “no say” over the enterprise.

“They are powerless when a worker is terminated from the platform, and have no control over working time,” she added.

There have even been joint protests of umbrella companies and workers against Uber after the company sought to reduce fare prices.

Precarity is precarity, whatever form it takes

Sub-contracted workers still have workers’ rights which they did not while ‘bogus self-employed’, so it is likely that if this is the new normal for digital labour platforms it will still incur new costs on them. But we should be clear that sub-contracting is anything but the solution to the gig economy. Indeed, it highlights the danger in splitting off gig workers as a separate category from other precarious workers.

Whether paid by a sub-contractor or directly by an app, these are low-paid, precarious jobs, and that is the fundamental problem that needs to be tackled.

Positive Money: Will Switzerland be the first country in the world to introduce a Sovereign Money System?

In June 2018 Switzerland will hold a referendum on its national constitution. The proposal, known as the Vollgeld Initiative (VGI), would transform the Swiss money and banking system, putting an end to private banks’ ability […]

John Weeks, SOAS, University of London In the months before the coronavirus pandemic, the devotion of many mainstream politicians to balanced budgets and austerity was waning. The likes of Germany and the US were looking […]