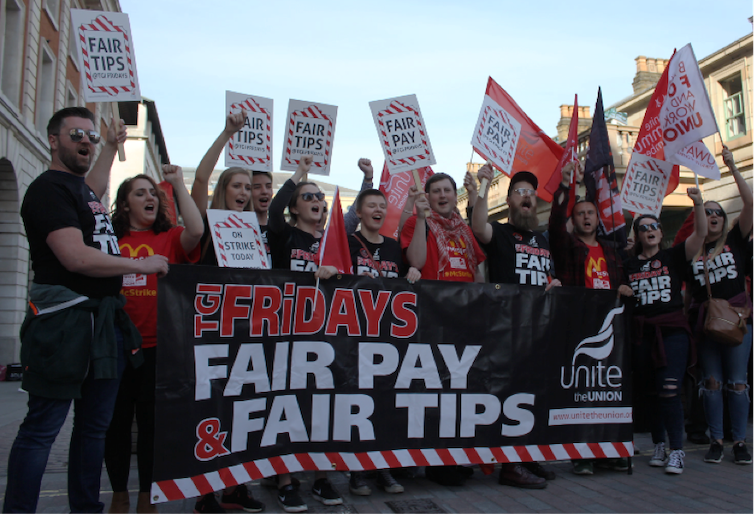 Strikes have taken place at McDonald’s and TGI Friday’s restaurants across the UK in recent months. These strikes are the first of their kind in the UK, instigated by a new generation of trade union members fighting for better pay and fairer working conditions.

At the Wales Institute of Social and Economic Research, Data and Methods (WISERD for short), we’ve been following these strikes on social media and at the picket lines, to discover what’s driving this fledgling movement, and how it differs to those that went before.

Most young people in the workforce have experience with low pay and zero hours contracts. At TGI Friday’s, table staff were told earlier this year, with two days’ notice, that 40% of their tips from card gratuities would be taken and redistributed among kitchen staff, as part of the move towards a central pool of tips called a “tronc”. We heard from workers in London that this amounts to wage losses of around £60 a week – or £3,000 a year.

McDonald’s has also drawn criticism previously, for its use of zero hours contracts. Last year the company reported it would offer 115,000 of its workers employed in this way the chance to switch to minimum hours contracts – though 80% of those asked chose to remain on flexible contracts. Nevertheless, critics have attacked these arrangements as exploitative, and workers have responded with sustained collective action to fight for better wages and more secure employment around the world – most notably with the Fight for $15 in the US.

Although staff at both chains vary in age, it is the younger generations who are represented the most on the picket lines. This may just be a product of the low average age of service sector employees. But it may also signal that young people are becoming more inclined to organise and campaign for their rights.

Trade unions are capitalising on the appetite among this generation of workers for change – as well as the potential for young, savvy social media users to extend the reach of their campaigns. McStrike is organised by the Bakers’ Union (BFAWU) while the TGI strike has the support of Unite. This is a strategic decision: both unions offer each other mutual support – and together they hope to build a broader movement across the service sector.

Far from the stereotype of the apathetic youth, the young workers involved on the picket lines are passionate and well informed. They are tuned into party politics, appreciate the wider labour movement they are becoming a part of and give confident speeches to the public to that effect. There is a clear ethos of collective action: as Shen Batmaz – former McStriker, now BFAWU organiser – told us: “This has been about working together, helping each other, to make things better.”

We’ve also witnessed a carefully crafted continuity between the two strikes. McStrikers stand side-by-side with TGI employees on the picket line. Solidarity is forthcoming from other quarters, too. BECTU members from Picturehouse cinemas and workers from the Intercontinental Hotels Group have both been fighting for the London living wage, and both had representatives at the TGI strike. All are determined to build on the momentum that is emerging.

Digital tools including social media are often heralded as the key to revitalising trade unions. Inevitably, young people have also been getting involved with trade unions and protests online. We collected 90,000 tweets during the first McStrike, and witnessed how McStrikers’ images and stories were used to personalise the strike and generate support from the wider public. Protesters’ tweets were retweeted thousands of times, creating an online network that spread far beyond those directly involved.

This online presence has continued to accompany the strikes, spreading the message that this is not just a McDonald’s or TGI’s issue, it applies to anyone – young or old – working for low pay on precarious contracts. So far, these strikes have maintained their own online identities: “#McStrike” (adopted from a New Zealand-based campaign) and “#AllEyesOnTGIs” are instantly catchy, while “#FightFor15” has gained international recognition.

There is already a strong sense that these strikes, and the movement they are building, can be successful. After the first McStrike in September last year, McDonald’s recommended pay increases for its 115,000 staff, across all ages. But whether these will be passed on to staff in franchises is yet to be seen, as franchises set their own pay rates. Although these strikes are small scale for now, they show that young workers on precarious contracts are not impossible to organise.

It began in the US with Fight for $15, but the determined cooperation between unions representing workers in similar positions has brought that fight to the UK. Online and offline, workers and trade unions are developing a model that can be replicated and expanded across different industries and in different countries. And while it’s important to celebrate the small victories, the lasting success of these campaigns may be the fact that a new generation of young people are joining unions and throwing themselves into campaigning for their rights.

New Economics Foundation: Russian gas is the least of our energy problems – Our focus should be on using less gas rather than where it comes from