With the world’s eyes currently glued on COP26, it’s time to take a fresh look at how we handle global, protracted crises 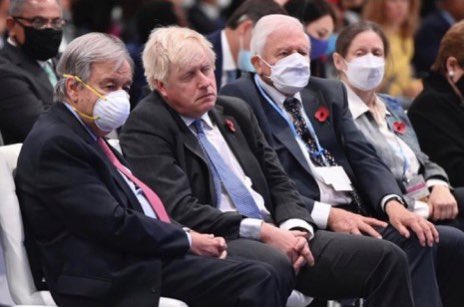 On the web site of Columbia University’s climate forecasting centre they once displayed an old New York law that threatened anyone with punishment who claimed being able to predict the future. And so it is very difficult to make any inferences from the ongoing climate negotiations in Glasgow and the rain of net zero pledges by nations and corporations, in order to understand where we will be heading with the climate crisis. Nevertheless, I believe that certain human traits tend to play out in remarkably similar fashion, and this can provide an opportunity to make certain predictions with reasonable confidence.

What I am referring to here is a remarkable resemblance between the stories being told around the pandemic and the climate crisis. Here I am not concerned about the argument often heard that the pandemic shows that humanity finally ‘gets emergencies’ and can act on them. What I mean is how humanity as we know it treats protracted threats that do not want to go away.

In the climate case, what we are being made to believe is that net zero is the solution, and that it will deliver the Paris Agreement’s goal of limiting warming to “well below 2 degrees, aiming for 1.5 degrees Celsius”. In the case of the pandemic, the expectation has been that once vaccines have been developed and rolled out, we would stop the spread of the virus and end the pandemic. Both are essentially technological measures that promise solutions without the need for any systemic change. No questioning of the need for a rapidly expanding globalised, ever growing economy, no fundamental change in behaviour.

And both are or will be failing. Europe is now entering a new wave of infections with continuing high rates of fatalities, while it has become clear that the virus is here to stay with us. Likewise, net zero will and cannot deliver on the promise of the Paris Agreement. According to the last IPCC report, our remaining carbon budget for a two-thirds chance of achieving 1.5 degrees of warming is 400 billion tons of CO2 by the start of 2020. If we take into account that global emissions in the year of the pandemic-related lockdown were 40 billion tons, and assume some increase for 2021 and a linear decline from next year onwards, we need global net zero by 2037!

The current net zero hype will help, because it makes it more likely that one day, we will give up the use of fossil fuels and leave them in the ground. But it will not deliver what it is promising. Likewise, the vaccine roll-out has surely decreased suffering, but it has failed to stop the pandemic, and we will likely have to learn to live with the virus.

Here I believe is a useful analogy for the climate crisis, and drawing on it creates a scary prospect: if our urge to go back to normal – like long-distance travel and holiday making – is so strong that we are happy to tolerate continued death and suffering by the frail and elderly, is the same going to happen with the climate crisis? Are we simply going to observe that our technological solutions around net zero and sucking up vast amounts of carbon fail – and then go on as before and accept the suffering of those in poorer and more exposed communities?

The most visible victim of our desire to remain the same will be the Paris Agreement’s climate goal, and with it the goal of the United Nations’ climate convention to prevent harm by “dangerous interference with the climate system”. If we continue to believe in technological solutions as the way out of the climate crisis, once we’ve done our best and ticked all the boxes and it still hasn’t worked, we will simply accept it. Given our past failure to implement climate policy, the likelihood of this outcome is very high. It will mean that we will learn to live with a half-solution, tolerate some 2-3 degrees of warming within this century, and let those who are right there in the firing line of increasing climate disasters or crop failure fend for themselves.

There is only one way to steer away from this path, and that is to accept our failure and begin to think more deeply about who we are, and who we want to be. The way we consume nature rather than being with it and part of it – this is a big part of why we now have a much bigger risk of pandemics. Likewise, our disrespect of planetary boundaries and continued belief in eternal economic growth is very much at the heart of the on-going climate and ecological crisis. We need to dig deeper into our thought patterns, and give up feeling superior because we believe we are among those who ‘get’ the crisis, who ‘feel’ the emergency – while pinning our hopes on solutions that cannot deliver.

A common strategy that follows from this sense of superiority is to blame the deniers. It is borne out of the misguided belief that we are somehow outside of the system that has created the problem in the first place. But in reality, the denier only wishes the problem does not exist, while we – as those pinning our hopes on technological solutions – are wishing the problem away in other ways. Likewise, when the public debate is all about the measures within the current system and never about the roots of the problem, those in the debate who push for the measures essentially use the victims and their suffering as a lever to make their point more forcefully. The existence of communities suffering already now from climate disasters is a great boost for us when we call for immediate reductions in emissions and commitments to net zero. But as long as we do not admit full-on our own complicity created by our nature consuming, high emission life styles, our good intentions will only create the false impression that something is being done. And in this way, we effectively exploit the suffering and victimise the victims even more, for our own grandeur and self-righteousness.

The climate crisis is not a crisis of greenhouse gas emissions. It is a crisis of cleverness, of us thinking we know it all. Only once we learn humility and value what we have – only this one beautiful planet – can we hope for an end to the string of planetary crises that afflict our civilisation. Let the even more clever likes of Jeff Bezos and Elon Musk dream of escaping to other planets – if we don’t value this one, we will surely lose it.

Recent calls for economic justice, and particularly intergenerational justice, suggest a new post-crisis moral political economy could be emerging Adam Standring is a PhD student at the Universidade Nova de Lisboa, Portugal Cross-posted from the […]

The annual conference of the American Economic Association (ASSA 2021) was unusual this year, for obvious reasons.  Instead of 13,000 academic and professional economists descending on an American city to present and discuss hundreds of […]

Anyone who takes the time to read about the Mercosur trade deal realises it is not in the interest of the environment, neither in Europe or South America. It is however excellent news for the […]