The financial sector is hailed as the crowning glory of the UK economy. But as it blooms, everything else withers. This is true wherever the financial sector becomes dominant in the economy, similar to what happens in an oil rich nation.

Nick Shaxson is an Investigative Journalist and author of “Treasure Islands”. His new book, The Finance Curse, will be published in early October.

Cross-posted from The Finance Curse 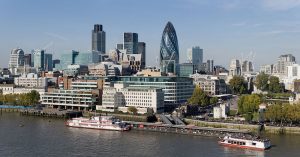 Alongside the launch of The Finance Curse, and my Guardian article, there’s a new study by Andrew Baker of the University of Sheffield, Gerald Epstein of the University of Massachusetts Amherst, and Juan Montecino of Columbia University, estimating that the UK has suffered a cumulative £4.5 trillion hit to its GDP from 1995-2015, due to its financial sector being too large and having turned away from its proper traditional functions towards more harmful and predatory ones. That is equivalent to 250 percent of GDP – or £170,000 per UK households.

That report is here (also here.) This image shows what the the table essentially represents: 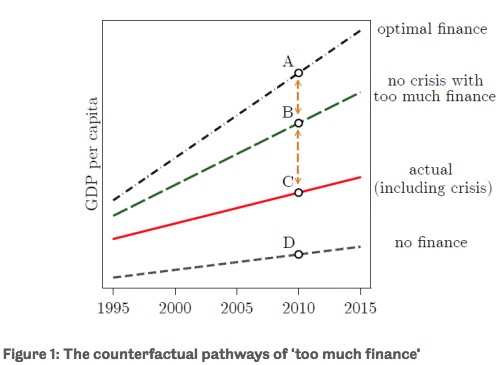 In other words, if Britain had had an optimal, smaller financial sector focused on its traditional beneficial roles, it would have had a higher growth trajectory represented by the line A, but in the real world it had a lower growth trajectory due to oversized finance, on line C. (The £4.5 trillion, for wonks, is the area of the graph between lines A and C.)

How do they calculate this? Well, it’s (conservatively) the sum of two components. First is the long-running cost of the global financial crisis and its aftermath, which looks like this: 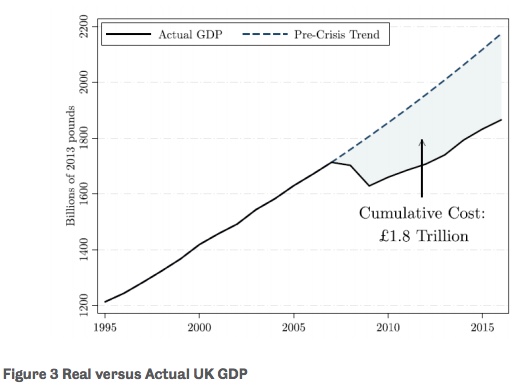 (This is a pretty standard calculation, and this £1.8 trillion is quite compatible with estimates by Andrew Haldane of the Bank of England, and others.)

Second, there’s a category called “misallocation” – which is, roughly, the £2.7 trillion damage to economic growth due to finance distorting the economy, and extracting wealth from it. That category looks like this: 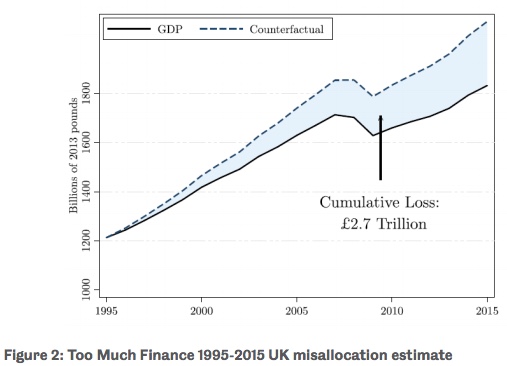 In other words, economic growth has been lower, year after year, than it would have been if finance had been at its optimal size and serving its proper functions. 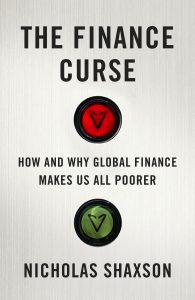 If you’re looking for examples of “misallocation”, look at this recent post, or my new Guardian Long reads article, or for the Full Monty, my book.

Adding these two figures – £1.8 trillion in crisis costs, and £2.7 trillion in misallocation costs, and you get £4.5 trillion (obviously taking care to avoid double counting: as the study explains, the data being used already “controls for business cycles associated with financial crises.”)

But wait! There’s a third category, known as “excess rent,” which is, roughly, too much profit and too much remuneration flowing to finance, over and above what they should earn for providing their services. (Banking billions, billionaires and bonuses, you might call it.)

That’s a further £700 billion. The academics don’t add this to the £4.5 trillion total to get £5.2 trillion, because a good chunk of those excess rents are from overseas. But there’s a good case to be made that plenty of it should be added. (People may try to push back against this idea, saying that excess rents are simply a transfer from one part of the economy to another. To get a sense why this isn’t so, imagine Amazon’s boss Jeff Bezos walks into a bar. Suddenly everyone in the bar is, on average, a billionaire. But to get a sense of how well they’re all really doing, you need to remove Bezos’ billions from the calculation.)

The point is, the £4.5 trilion is a conservative total. (What is more, the damage is calculated up to 2015 – but the damage has continued to mount since then.)

What is the optimal size, and how do they calculate the damage?

There’s a whole body of academic research out there now which is known as “Too Much Finance” – all of which shows the same basic relationship. This research is summarised here.

As a financial sector in a country develops, it tends to support other parts of the economy – but only up to a point. There are several papers with graphs showing the same basic inverted u-shaped relationship – here’s one, from the IMF: 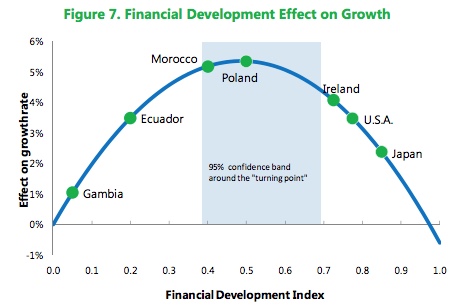 The Baker / Epstein / Montecino report uses a different, and more widely used metric, than the one in this graph, and that’s the ratio of credit to the economy, to GDP. The ‘sweet spot here’, the IMF and others have found, is when this credit, on the relevant measure, hits around 90-100 percent of GDP. The UK passed that point long ago, and over 1995-2015 averaged around 160 percent.

Based on where the UK is on the curve, and the angle of slope at that point, you can then get a rough estimate of the annual hit to growth. Then you add it up over the years.

My own back of the envelope estimate is that a 1.2 percent annual hit to growth will get you to 250 percent of lost GDP over 20 years. (Here’s how it works: in Year 1 your GDP is 1.2 percent smaller than it should have been. In year 2, your GDP starts 1.2 percent lower, and loses another 1.2 percent, for 2.4 percent. In year 3, you’re down 3.6 percent. Pretty soon, you’re talking real money.

The UK’s Finance Curse? Costs and Processes. Take a look.

It follows an earlier study by Epstein and Montecino, looking at the growth costs to the US of oversized finance:

we estimate that the financial system will impose an excess cost of as much as $22.7 trillion between 1990 and 2023, making finance in its current form a net drag on the American economy.

As banal as this may appear, this is truly an historical landmark for this century. By Hannah Dewhirst, Campaigner at Positive Money Cross-posted from Positive Money Britain’s central bank becomes the first in the world […]