Alex Foti reports from Italy’s riders strike on Friday [March 26], which saw delivery workers refuse to respond to the app across the country in a major show of union power.

Alex Foti is a Milanese editor and activist, and author of ‘General Theory of the Precariat’ (Amsterdam, 2017). 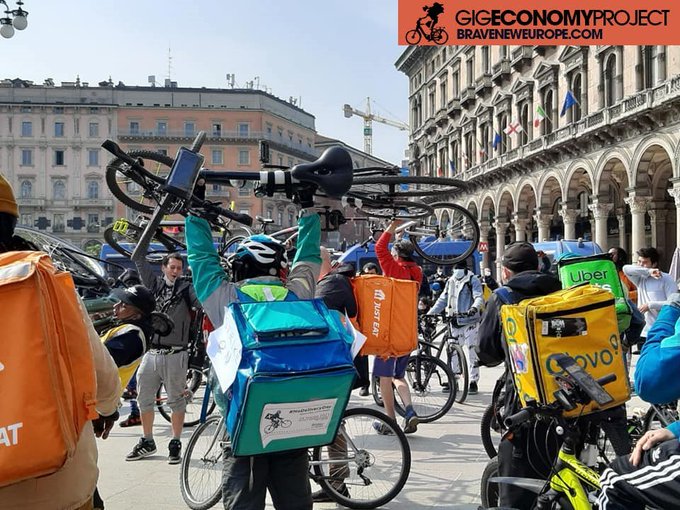 March 26 is likely to go down in Italian labour history as the day when spaghetti gig workers put algorithmic employers on the defensive.

Even before occurring, the strike had scored a result, since in the preceding days the Italian ministry of labour signed a memorandum prohibiting the worst of digital exploitation, also supported by Assodelivery, representing Deliveroo, Glovo, Uber, as well as the riders’ union network Rider X i Diritti (‘Riders 4 Rights’) and Italy’s big three mainstream labour organisations, CGIL (nominally red), CISL (catholic) and UIL (reformist).

On Friday, in 30 Italian cities large and small, riders working for oligopolistic delivery platforms refused to take orders and invited consumers to refrain from making them, in a major show of union power. Nobody ate lunch or dinner from Deliveroo or Glovo, and despite the fact it’s notoriously hard to restrict labour supply in the gig economy, scabs were few and pickets actively discouraged them from responding to the app.

In fact, the strike received major political support from center-left parties and tonnes of media coverage in mainstream media: it felt like all of Italy was supporting the precarious riders, many African-Italians, in their struggle to be acknowledged as fully-fledged workers under the law, endowed with employee rights against substandard wages, health hazards and unfair dismissal.

The upsurge in solidarity with the thousands of riders on strike in Milan, Bologna, Turin, Florence, Catania and many other cities was helped by the fact that one month ago the Milanese magistrates had uncovered a system of structural abuse in the app-mediated delivery industry, punishing Uber Eats and wondering aloud whether gig workers were slaves on call rather than people with rights and dignity (read more here). And March 24 had seen the first successful national strike versus Amazon in Italy, especially in the logistics hubs of the Po Plain, thus setting the tone for the riders on March 26.

Preceded by a press conference in Bologna by the Riders Union (one of Italy’s strongest and close to the city’s autonomous-run social centers) outlining the objectives of the movement, the riders received the solidarity of the city’s school teachers and care workers in an evening gathering in the central square.

In Milan, the #nodelivery day saw ‘Deliverance Milano’ swarming across the city and seizing the attention of city dwellers in all neighbourhoods who invariably cheered them on, while a strike of transit workers had blocked the city’s subway system and taxi drivers had gone on strike. A demo of striking riders converged on the Ticinese Gate, a resting place for riders and for over a decade the starting point of the Milan May Day Parade of the precariat, where logistics workers of SI Cobas, the militant union that has organised thousands of logistics workers in Lombardy and Emilia, greeted them with their red banners. Another militant union, ADL Cobas, organised strike rides and pickets near the squatted ‘Chamber of Non-Work’, on the opposite side of the city.

In Turin, the syndicalist riders of the city have expressed a rap combo, ‘RiderzWithAttitude’, who rhyme impeccably about the pitfalls of gig work and their hate for bosses and cops (I saw them live in an anarcho–vegan squat last weekend).

To end this report on a memorable day, I leave readers with the words with which Deliverance Milano concluded their press release yesterday night:

‘We are not slaves, we are workers.

‘Rights for riders, we are citizens.

‘One Day, One Strike,

‘Come on Riders, Not Just for Us but for Everyone!’

Manifesto for a More Sustainable and Fairer Netherlands after Corona

We can make the Netherlands radically more sustainable and fair: five proposals for the Netherlands after Corona, signed by 170 academics. COVID-19 shakes the world to its foundations. The corona pandemic has already cost and […]

Branko Milanović – The beginning of a new globalisation

Prior to the pandemic, capital used to move seamlessly, while workers didn’t. Now, this trend could be reversed Branko Milanović is an economist specialised in development and inequality. His newest  book is “Capitalism, Alone: The […]