That Podemos was having difficulties was clear. Its dramatic upward trajectory in the polls and elections had stalled. A plausible and objective  explanation for this development was difficult to find. We asked Andrew Dowling to write piece, which brings us all much further.

Andrew Dowling, Senior Lecturer in Catalan and Spanish History at Cardiff Univeristy. He is the author of ‘The Rise of Catalan Independence. Spain’s Territorial Crisis’ (Routledge) 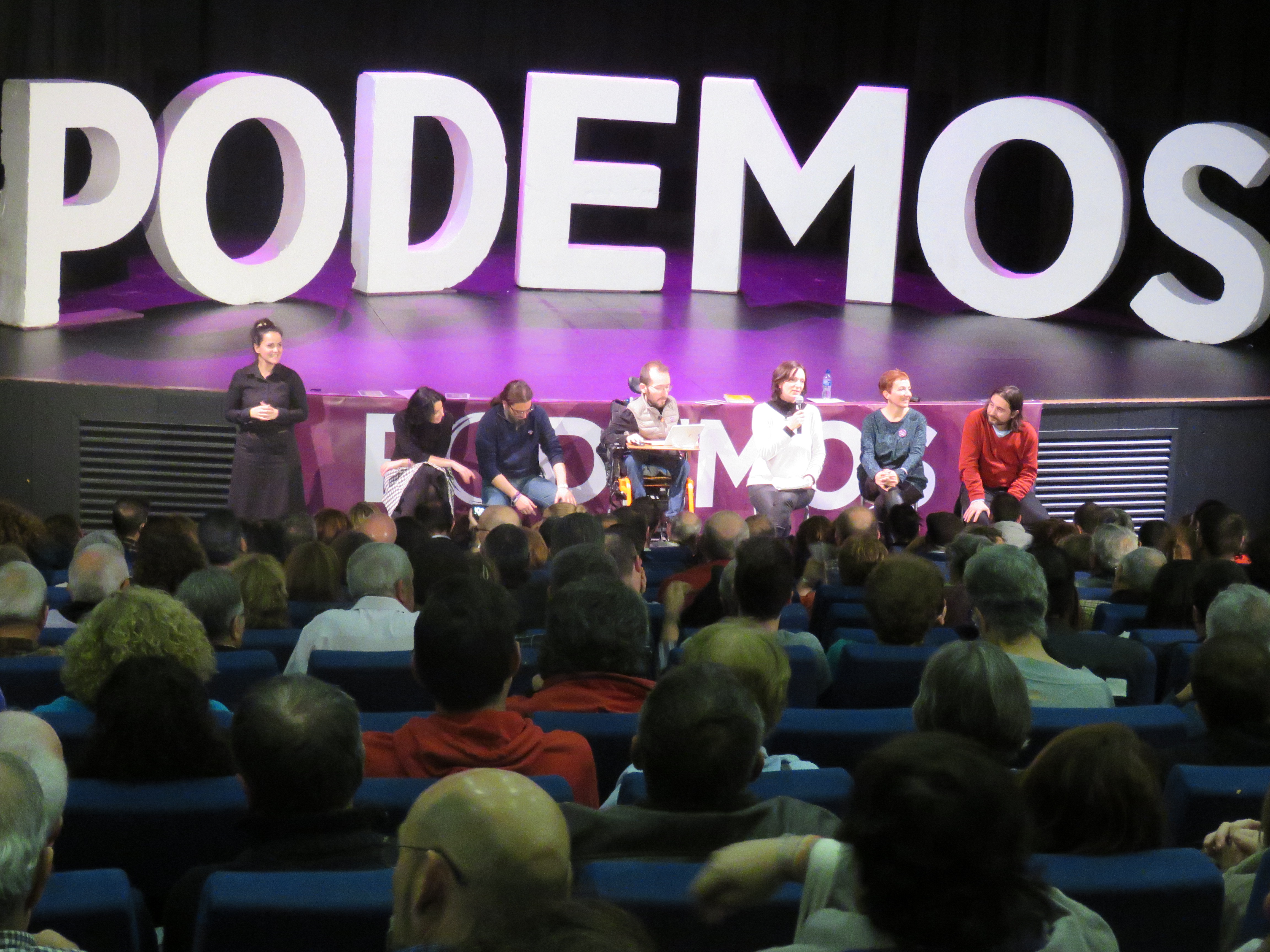 After its breakthrough in the European elections of June 2014, where it obtained 8 per cent of the vote just a few months after its creation, Podemos became Spain’s most supported political party and by early 2015, seemed on an inexorable rise, heading for power at the national level. Podemos was particularly effective at attracting voters under 40 and sectors of Spain’s middle classes that had seen their prospects eroded by the intense economic crisis experienced in Spain since 2008. This generational element had implications for both the growth of the party and its subsequent stalling. Podemos’s apparently relentless rise in Spain coincided with Syriza forming a radical left government in Greece in January 2015. Whilst in much of Europe the deep economic crisis produced right wing populisms, Spain and Greece seemed counter to this wave, whilst Italy produced the ideologically confused 5 Star Movement.

In the first year of its existence, Podemos seemed able to astutely balance its origins in street protest, with highly successful political communication and a disruptive political narrative. The ruling elite in Spain were framed as la casta (the caste) who were to be swept aside through radical democratic renewal. By January 2015, Podemos was on an upwards trajectory, attaining 27 per cent of the vote. However, this moment was also that of peak political support.  In Spain’s general elections of December 2015 and June 2016, Podemos was unable even to beat the greatly weakened Spanish socialists in the PSOE. By 2018, support for Podemos hovered between 14 and 17 per cent.

What went wrong for Podemos?

We can find three principle elements, which I will consider in this article.

The limitations of the Greek comparison

Syriza inspired and then limited Podemos. January 2015 saw Syriza form a government in Greece and Podemos was able to capitalise on the implications of this momentous change to the Greek political system. However, by September 2015 Syriza had lost its battle with the European Union and resigned itself to being a government administering austerity. This defeat for Syriza impacted on Podemos in terms of the Spanish party’s belief that a major overhaul of Spain may not be achievable. Furthermore, Spain was not Greece for a number of reasons. The Spanish socialist party, the PSOE, though wounded, was not close to marginalisation faced by PASOK. The Spanish economy was deemed too big to fail by Brussels and though austerity greatly damaged the social fabric of Spain, there was no social collapse like in Greece. Finally, Greece has no real issue of national minorities that are politically organised, whereas a third of Spain has party systems with important regionalist and nationalist components. Podemos has been required, from an early stage, to link up and form alliances with these local progressive forces, often meaning it has had contradictory political narratives at local and at national level. In the case of Catalonia and the Basque Country, the local nationalist dimension has proved particularly difficult to disrupt. Even so, these local linkages provided the greatest opportunity to Podemos, where in the spring of 2015, it notably advanced in Galicia, Navarre, the Basque Country, Valencia and Catalonia.

Whilst the Spanish political order seemed able to cope with the challenge of the indignados, it was the attempt at attaining state power by Podemos that galvanised a strong counter-reaction from traditional Spanish elites. Finance, the print media and the existing political class became determined to prevent Podemos attaining power. Spain’s once newspaper of record, El País, played a key role in the relentless assault on Podemos, as did  other more traditionally conservative media outlets. Whilst institutions of the Spanish state were under intense pressure, the period from 2008 to 2018 also demonstrated the resilience of the state authorities. Thus Podemos seemed to over-estimate its own political capacity whilst under-estimating the traditional sources of social, economic and political power in Spain.

The next main element that explains the stalling of Podemos concerns factors internal to the organisation itself. As Podemos grew, it sought to achieve a balancing act between its goal of disruption and its desire to achieve political power. This has meant, particularly from 2016, often erratic and confusing political messages. Initially, Podemos constructed a political narrative around being a radical formation that did not exist in traditional left and right terms. Subsequently the party sought to clearly occupy the political space to the left of the PSOE. Podemos is frequently destabilised by disputes between a more traditional radical left and what we can term a post-modern left.

Tension has also emerged within the wider organisation around questions of internal party democracy over issues such as the imposition of party lists. These internal disputes were also partly related to the social support base of the party. Podemos has struggled to make inroads amongst the precarious poor, industrial workers, whether organised or not. This has been, to some extent, a generational problem as the leading figures within Podemos are in their 30s. Sectors of the under 40s who saw their career and employment prospects shattered by the economic crisis flocked to Podemos. The traditional working class however, usually a generation older, was either relatively privileged in terms of employment stability or, had been experiencing deteriorating economic conditions since the 1980s. In this sense, the arrival of the economic crisis was a shock to some, but for many traditional workers, it simply represented more of the same. This differential was particularly reflected in the 15M indignados movement which was mostly unable to reach out to the traditional working class. Spain’s trades unions played little or no supportive role. As with Corbynism, Podemos has its greatest appeal amongst the urban educated middle classes and for reasons of culture, identity and political narrative, has achieved little real traction amongst the post-industrial and precarious poor.

The crisis of the nation

The third and final element to consider that has limited the advance of Podemos is the nationalist question. Nationalism and national identity issues meant that by the autumn of 2017, the Catalan question and the quest for independence produced the greatest political crisis in Spain since the 1970s. The ongoing national crisis in Spain around Catalonia has been a mostly negative experience for Podemos. Podemos has been the most critically judged of all of the main Spanish parties, including amongst its own voters. Until 2017, Podemos achieved modest success with its calls for the recognition of the multi-national reality of Spain. However, the attempted unilateral secession of Catalonia in the autumn of 2017 produced an intense national rallying in much of Spain and it has been the right that is the main political beneficiary.

Podemos was left reeling by its inability to deal with the intense emotional attachment of most Spaniards to national unity. This was made worse by the serious errors of the leading pro-independence forces in Catalonia. When Podemos first emerged, it was fiercely attacked by conservative sectors within Catalan independence and as the independence question became ever more politically polarising, the nuanced narrative of Podemos was drowned out. Podemos was equally condemned for being too close to Catalan independence by the Spanish right whilst the Catalan nationalist right accused it of being a trojan horse of Spanish nationalism. Support for Podemos across Spain dropped to 14% by late 2017. By April 2018, the two rival right parties in Spain were together consistently obtaining over 50% in polls, with the support for Podemos and the socialists barely reaching 35%. Though political crises continue in Spain, for now it seems that the Spanish right will dominate national politics, and certainly whilst the Catalan crisis continues. Spain is now thrust into a Thermidorean conservative reaction where the real political dispute is a fight to the death between the old and new right. Although Podemos is now a permanent part of Spain’s political landscape, its hopes of political transformation are on hold. The next major test of Spain’s political parties will be the local elections of May 2019, where Podemos and its allies will be sorely tested to maintain the gains of 2015. Loss of the flagships councils of Madrid and Barcelona would produce a serious crisis in Podemos. It is all a long way from the wave of euphoria of 2014 and 2015 around major political change in Spain.

The Gig Economy Project spoke to Zeynep Karlıdağ, rider at food delivery company Gorillas and member of the Gorillas’ Workers Collective, about their wave of wildcat strikes and warehouse blockades in Berlin. The Gig Economy […]

At an international conference of financial supervisors, Bank of England Governor Mark Carney described the ‘transition in action’ underway as central banks and the financial sector at large begin to address climate change. Positive Money’s […]