Closing itself in a fortress, under the hegemony of the Franco-German axis, Europe is self-condemned to a progressive irrelevance in a world in which migration is a permanent feature of modern history.

Antonio Lettieri is a former National Secretary of Italian Trade Unions-CGIL, Member of the ILO Governing Body, and Advisor of Labor Minister for European Affairs. He is currently editor of the website Insight

Cross-posted from our new cooperation partner Insight (also in Italian). 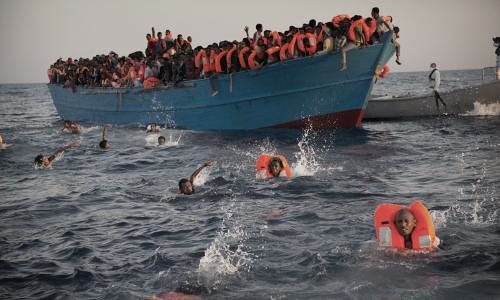 Apparently, the meeting of the European Council on June 28-29 ended, with regard to migration, without any solution. In fact, it has brutally revealed Europe’s harsh and hostile face in front of one of the greatest dramas of our time. Italy fought to pass the principle that the question of migration does not concern only Italy, but the whole of Europe. “Whoever crosses the Mediterranean”, the Italian Premier Giuseppe Conte said,” aims to enter Europe, not necessarily to stop in Italy”.

To affirm this principle that seems obvious, Italy threatened the veto on the Council’s conclusions. Then, this tenet entered the final resolution, stating that EU member states would have opened, on a “voluntary” basis, their doors to migrants. The voluntary clause was obliged by the fact that the countries of Visegrad alliance – Poland, Czech Republic, Hungary and Slovenia – would not have accepted the commitment to share the migratory flows. Germany and France had finally accepted the principle of the EU involvement that, in fact, avoided the threat of the Italian veto of the final resolution, which would have opened an existential crisis in the European Union.

The harsh dispute ended after a long night, at dawn on 29 June, with a unanimous vote on the engagement to deal with the migration issue. But, immediately afterward, Mr. Macron, the French president, who had agreed with the Italian government about the final document, declared that France would not accept any migrants. Adding that it was the responsibility of each country, where the migrants had first landed, to organize “closed camps”, in practice detention camps, suitable to prevent their passage to other EU countries.  As for Germany, Angela Merkel, declaring herself only partially satisfied, reaffirmed that the asylum seekers had to be returned to the European countries where they had first arrived.

Substantially, it was reversed what had been set out among the main member states – even though based on the “voluntary” commitment of each country. More, the immigrants already irregularly arrived in Germany had to be sent back to the countries where they had first arrived: an unreasonable claim accepted by Greece and Spain but rejected by Italy.

So, the principle of “voluntariness”, agreed by Italy with the two main European interlocutors, was dissolved, testifying not only to the European dis-union, but the unreliability of its policy or, mainly, of the German-French axis. In fact, according to the Franco-German doctrine, migrants disembarked in Italian ports, even though aiming to move to other European countries, should have been placed in special “closed camps” to be sent back, except in exceptional cases, to their countries of origin.

Sent back where? Evidently to Libya from where the majority of migrants departed – a country divided and without an actual government, dominated by criminal organizations which control the detention camps and the passage of the migrants toward the northern shores of the Mediterranean, mainly the Italian ones. In any case, the migrants should be sent back to the Libyan camps where torture is infamously the norm. Let’s mention what Médecins Sans Frontières reported in the Italian newspaper “Repubblica”: The torturers – according to the collected testimonies – “use rubber hoses, electric shocks, acid on the skin. Almost all the African women, even if married or mothers are raped”. “I remember, recalls an operator of the humanitarian mission, seven adult Somalis … with ankylosis of the lower limbs caused by the fetal position, prolonged for months, by the very limited space in the Libyan prisons. In other words, it was no longer possible for them to stretch their legs “.

European authorities were now envisaging also other solutions, such as setting up specific detention camps  in the Maghreb countries – a solution that Morocco and Tunisia have rigidly opposed. According to the EU member states, the last solution should be the setting out of agreements directly with the countries of the sub-Saharan arc, from which the migrants come. An agreement with Somalia, a failed country? Or with South Sudan devastated by a fierce civil war? Or with the Islamist rebels who occupy the northeast territories of Nigeria?

Who can distinguish the stupidity from the inhumanity of these proposals, mired to block the attempt to escape from the war and the famine, through agreements with failed states or with criminal groups that exploit desperate migrants? The grotesque aspect is that most of the African countries of origin of migrants, without taking into account the Maghreb, are those of the old French Union, still today directly or indirectly under the French hegemony: from the Ivory Coast to Senegal to those on the sub-Saharan area, such as Chad, Niger, Mali, and so on.

Let’s take a look. Chad is governed by an authoritarian regime headed since the nineties by Idriss Déby, perhaps,  the longest-serving head of government on the planet, not by chance supported by the presence of the French military. Niger with twenty million inhabitants is one of the poorest countries in the world with an average income of $ 1200 a year, at equal purchasing power, and half the population in conditions of absolute poverty. A country rich, however, like Chad, of oil and other raw materials. On the other hand, Mali, once the seat of a great empire with the famous library of Timbuktu, is plagued by a civil war in which the French army has played a central role under the presidency of  François Hollande. In which of these countries should migrants, trying to escape domestic wars and extreme poverty, have to be sent back?

When they arrive in Italy, having had the fortune to survive crossing the Sahara, then Libya and the Mediterranean, it cannot be surprising that their goal is France where they could possibly join relatives or friends. But France blocks migrants on the Italian-French borders of  Ventimiglia or Bardonecchia. And, if they venture onto the snowy paths of the Alps, it is up to the French gendarmerie to capture them and send them back to Italy.

Migration is a global phenomenon, not specifically a European one. Over 60 million migrants are counted in the world. The African population which today is one billion two hundred million inhabitants, according to demographic forecasts, will double to two and a half billion by the middle of the century. On the contrary,  the European Union is the only corner of the planet where the population inexorably tends to decline. The current five hundred million will decrease due to the aging of the population associated with the low birth rates. Italy and Germany record, together with Japan, the lowest birth rate on the planet. The closure in a fortress is a self-condemnation to a progressive irrelevance in a world that will see the number of inhabitants growing from the current seven and a half to nine billion around 2040.

Italy cannot permanently receive 150- 200 thousand migrants a year as happened between 2014 and 2017. Yet, if the European Union were to accept one million a year, it would still be 0.2 percent of its population, and it would still be not enough to balance the trend of the depopulation. A perspective that has to do with the possibility of preserving the welfare systems, from pensions to health care, that still survive the neoliberal tsunami of the European Union.

Migration is a phenomenon that characterizes the history of all countries starting from Italy. Around fifty million citizens of the United States and Argentina as well as of other countries are descents of Italian migrants. And, notwithstanding the thousand miles of wall that separates the United States from Mexico, the migrants continue to enter the US, and we see Donald Trump order the separation of the children from their parents locked up in the Texan prisons.

We have seen Macron, just after signing the final declaration of the European Council, whose central point is the “voluntary” opening of the borders, declaring that “France will not open reception centers for migrants because it is not a country of first arrival “. But during the summer, the Mediterranean will still be, in one way or another, traversed by masses of desperate people. And, if NGO vessels are prevented from continuing their mission, even though it is hopeful that the Italian military navy will continue its rescue work, the number of dead is unfortunately growing.

No one will be surprised, when, in October, at the next European Council, the migration issue will remain unresolved, Italy, with its veto, will block the European Council conclusions. Then the crisis will be opened in the European Union, revealing that the king is naked, and showing Italy has broken free from a long period of old and humiliating servility, typical of previous Italian governments. A final choice that, perhaps, can help to open the only chance to start a new political era aimed at saving the European Union from its self-destructive ways.

Manifesto for a More Sustainable and Fairer Netherlands after Corona

We can make the Netherlands radically more sustainable and fair: five proposals for the Netherlands after Corona, signed by 170 academics. COVID-19 shakes the world to its foundations. The corona pandemic has already cost and […]

There is evidence that Germany is likely to shift toward wage restraint in the coming years. If other eurozone countries are unwilling – or unable – to mimic Germany’s wage moderation, distortion of real exchange […]

Bill McGuire – An open letter to all climate scientists

Short, but to the point (which is what we need these days). The topic of climate emergency is too great to be politely skirted. Bill McGuire is Professor Emeritus of Geophysical & Climate Hazards at UCL, […]