The new political framework  in Italy must be linked to the general collapse of the center-left parties in Europe. And to the eurozone crisis. 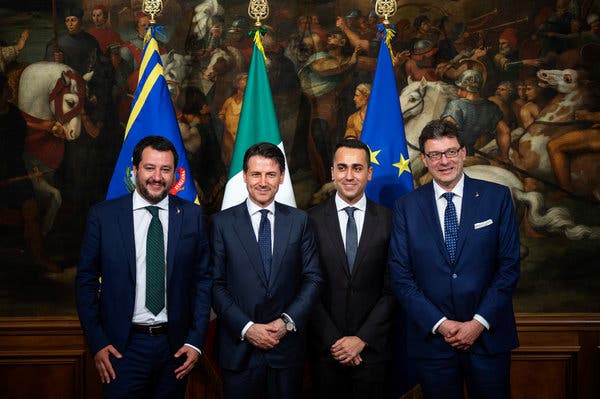 According to the current polls, the majority of Italian voters support the government based on the coalition between the Five Star Movement and the rightwing League. But if one asked the militants of each of the two parties of the new coalition what would have been their preferred choice, at least some of them would have expressed a different choice: some in favor of a clearly rightwing coalition between the League, led by Matteo Salvini, and Berlusconi’s Forza Italia;  the others for an alliance between Five Star , led by Luigi Di Maio, and the Democratic Party.

In the absence of possible alternative solutions, the two parties formed a coalition in many ways heterogeneous, as has been shown through the elaboration of the “Contract”,  mediating the dissonance on important issues, such as immigration, nationalization , the attitude towards the courts, just to mention a few controversial issues.

1.     However, before judging the new Giuseppe Conte’s government,  it is useful to ask a preliminary question: where does this unpredictable political asset, with its ambiguities and contradictions, come from? In addition, why, notwithstanding the dissonances, does the coalition get the approval of an unusually large majority of citizens? In other words, the question is: why, the two parties, the Democratic party and the Berlusconi’s Forza Italia,  which alternatively ruled the government in the last quarter of a century,  have together won a sum total of votes lower than  the Five Star Movement alone, born just five years ago? And how did  it happened that the League, reduced in the past elections to 4 percent of the electorate, has quadrupled the votes and, according to the current polls,  is close to 30 percent of  total votes? One couldn’t avoid these questions by resorting to the label of populism, the new Passepartout of the political analysis, when something happens that reverses the old trend.

It is worth remembering that this reversal is not a singular Italian event. The collapse of the center-left parties is the most important ongoing political process in Europe. Two cases are telling. The French Socialist Party that led France in the 80s and 90s, with François Mitterrand and Jacques Delors the central figures of the transition to the euro, was wiped out in 2017 elections, reduced to 6 percent of the vote. In Germany, the SPD, after being at the center of European politics with Willy Brandt and Helmut Schmidt,  has been reduced to a minor party with the worst electoral outcome after the second world war.

This descent into the underworld is not by chance. All the social democratic parties that, at the end of the last century, were dominant in Europe and unreserved supporters of the transition to the single currency, have participated in the same ideological and political metamorphosis: the rejection of the role of the state in the economy, of the foundations of the welfare state, and, of the party’s representation of the working class and the role of the trade unions.

This process was accompanied by a deep ideological revision: the superceding of the national state in favour of the emergence of an imaginary European superstate, as the guarantor of economic growth and of a new social balance, in the era of globalization. We know the outcome of this credo based on the advent of a new world. A world  finally freed from the states’ constraints. The Eurozone is the only area, among the advanced countries, that has not recovered the pre-crisis GDP levels, while the average unemployment is about 9 percent. And,  in Italy, the GDP is still five points under the pre-crisis level, while the average unemployment remains around 11 percent, reaching almost 20 percent in the South of Italy  – a level that matches the Greek unemployment crisis, but with the Mezzogiorno having almost double the population.

Given this framework, there is nothing mysterious about the March 4th electoral outcome. It just reflects the failure of the governments that led the country during the past decade, with Berlusconi’s Forza Italia, and then with the Democratic Party of Matteo Renzi.
2.     In the spring of 2019, a broad political change will take place in the main roles of the European institutions, following the reelection of the European Parliament. This, inevitably, will reflect the profound political changes that have taken place over the recent years in the countries of the EU. The new President of the European Parliament, the President of the European Commission and the President of the Council of Ministers will have to be nominated by the new Parliament. Moreover, in the following months, the mandate of Mario Draghi will expire, and his successor will have to be appointed to the ECB. In this framework,  we can forecast a complete political change. The representation of the social democratic parties that, along with the Popular party, have always been at the helm of the European Union, will be decimated. The People’s Party, in turn, will face a new scenario in which the political parties of the Visegrad Group, and many others with a critical view of the current EU’s policies, will take a crucial role.

On the other hand, Germany and France will retain a leading role, but on a much more fragile basis. In Germany, the smallest majority of the last half-century supports the CDU-CSU and SPD coalition government in the Bundestag. In France, the ambition of Mr. Macron to become a new Mitterrand, able to redefine the European institutions, has vanished. His movement, La France en Marche, which had triumphed in past year elections, has been reduced to a pitiful 20 percent of the electoral consensus, according to the most recent polls. In this changing framework, surprisingly, the novelty will be represented by Italy, with a government with a strong majority and the ambition to take on a new active role in the EU.
.
An uneasy task, in any case. The new government will have to face the challenge of the budget deficit and the public debt. This is the spectre that appears at every attempt to trace a political path in contrast with Brussels’ financial diktat. A ghost that can be exorcised?
3.      Let us begin by mentioning that the increase in public debt is not just an Italian feautre. It has occurred not only in Italy but also throughout all the eurozone during the post-crisis recession. When tax revenues decrease, while the basic administrative costs remain stable, and the interest burden on the debt grows, the debt increase is unavoidable. The most effective way to tackle the fiscal crisis is to accelerate the recovery by focusing on public investment – and this will initially increase the deficit.

Adopting this approach,  the United States faced the crisis of the 1930s with Roosevelt’s New Deal, And if this may appear a remote reminder,  it’s enough to remember that the US coped with the 2008 crisis, delivering 700 billion dollars to save the devastated banking system,  then, Barack Obama, after entering the White House, delivered 800 billion dollars aimed at reviving the economy.  This intervention was deemed insufficient. Undoubtedly, it could have been a much bigger amount to  restore the economic and social imbalances engendered by the crisis. But it is worth remembering that,  on the contrary, the Eurozone authorities, under the leadership of Germany, and with the complicity of the French governments of Sarkozy and Hollande, have imposed a cluster of fiscal deflationary measures, which have  paralyzed any chance of recovery and pushed unemployment to the highest levels in the last half-century.

No one should be surprised if the eurozone has become the area with the lowest growth in the industrialized world, with Italy becoming the most important victim, under the leadership of a complicit government adopting the deflationary policies of Brussels and Frankfurt. The new government was born on the promise of breaking this complicity.

The exit from the crisis will not be easy. The growth in the current year and in the following, is forecasted by  international agencies to be around one percent of the GDP.

A few figures can clarify the picture. According to the scheme agreed by the past government with the eurozone authorities, the budget deficit, currently at around 2 percent of GDP should be reduced to 0.8% in 2019 and to zero in the following year. That is to say, a “bloodletting” in a country with the lowest growth in the European Union. The new government will oppose the eurozone diktat – a poisoned pill in a devastated economy.

If the new government sets a deficit target of between two and three percent of the  GDP for the first years of the new legislature, between 30 and 40 billion euro will be available annually for new investments leading to increased growth and employment. The debt, of course, will initially grow, but with the expansion of the growth, its relative value should decrease in the medium term.

The new government will have to deal with internal hostility and the attack of almost all of the national press, along with  tough opposition from the eurozone authorities. Nevertheless, a change from the old devastating course now appears possible. If it is achieved, it will benefit not only Italy but also the European Union and the eurozone itself.

George Hoare – The Left Against the People?

“Socialism more generally must be a mass political movement, an attempt to defend and extend democracy into every sphere of life.” George Hoare is a mental health researcher based in London. He received a doctorate […]