We have been posting a number of articles concerning the rise of the Radical Right in Scandinavia in an attmept to provide some insights.

Roberto Iacono is an associate professor in economics and social policy at the Norwegian University of Science and Technology (NTNU) in Trondheim, Norway.

Cross-posted from the Institute for New Economic Thinking 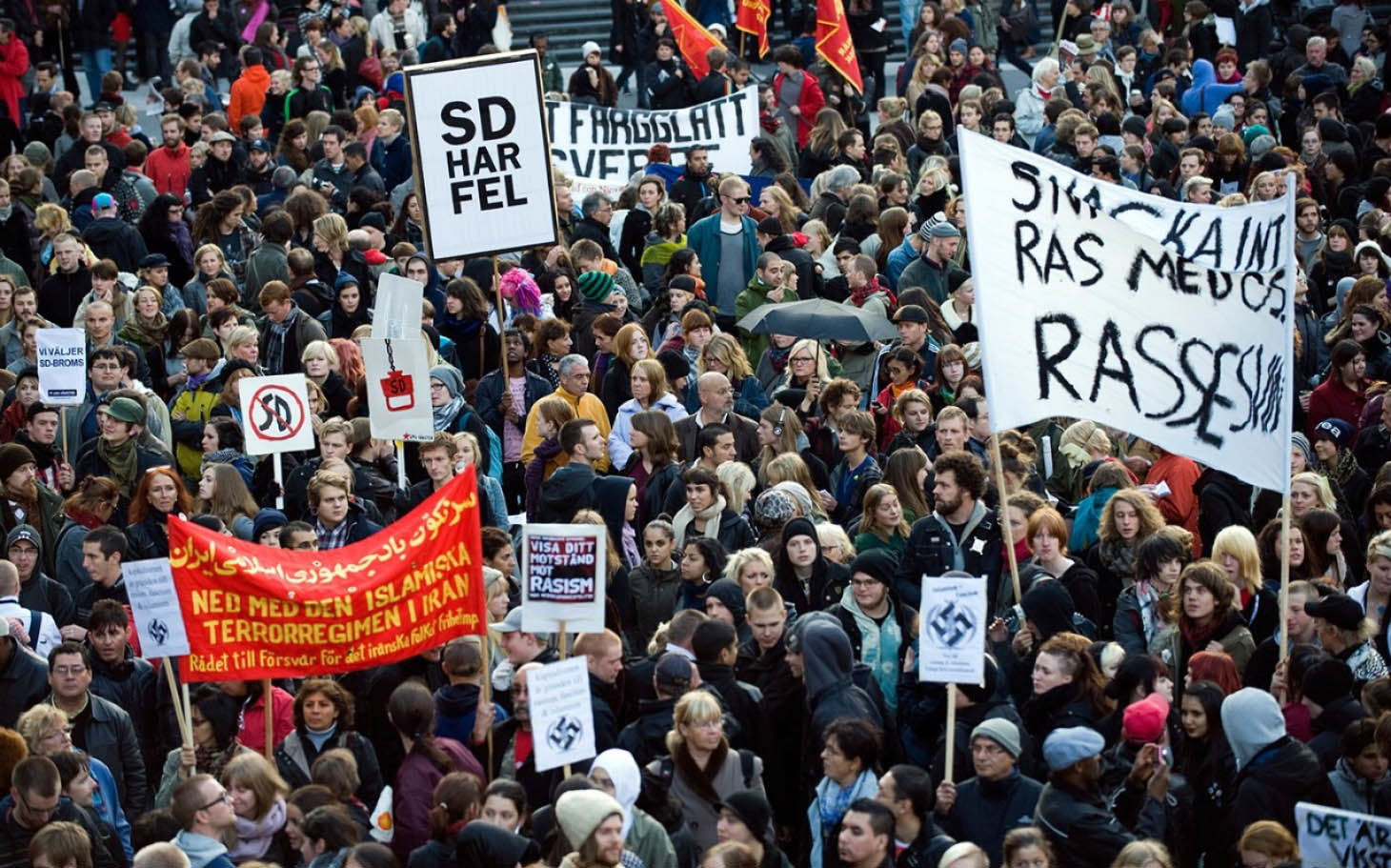 After Sweden’s elections, a look at how immigration and economics explain a political puzzle

In the last decades there has been a surge in support for parties on the far- (or radical) right of the political spectrum in the Nordic countries, where social democratic center-left hegemony had long been the norm. The outcome of the Swedish election on September 9th is only the most recent confirmation of this enduring trend. This short piece is an attempt to put forward a concise, tentative explanation of the structural mechanisms behind the growth of the Nordic far-right, looking mostly through the economic lens. For a more thorough analysis of the political rise of the Sweden Democrats party in Sweden, see Dal Bó et al. (2018).

Let us start by shedding light on three crucial stylized facts that deserve attention. First, the retrenchment of the welfare state. Since the end of World War II, Swedish and more broadly Nordic welfare states have scored high on welfare generosity indexes (Scruggs et al., 2017) due to high replacement rates and generous levels of benefits. From the 1990s onwards, however, a clear shift in the economic policy paradigm has been observed (for an overview of these tendencies in all European welfare states, see Iacono, 2017). This paradigm shift has led to a general retrenchment of the expenditure on welfare in the Nordics as well, with the only exception of oil-rich Norway (as analyzed in Iacono, 2018a). The resulting austerity in the provision of social insurance and welfare goods has hit mostly the bottom half of the income distribution in the Nordic countries, leading to a parallel increase in the inequality of disposable income (i.e., including taxes and transfers). For instance, in Sweden, the share of income that accrues to the top 10% of the distribution has increased from 23.6% in 1990 to 30.6% in 2013 (World Inequality Database, 2018). Paradoxically enough, much of this increase in inequality has taken place with the Social Democratic party alliance in power.

Second, there’s the predicted ageing of the working force. Looking at the future prospects of the Nordic welfare model (Iacono, 2018b), one cannot ignore the projections with regards to the ageing of the tax-paying working force in Scandinavia. If demographic trends are not inverted and the current economic policy paradigm of welfare austerity remains in place, the per capita expenditure on welfare goods threatens to decrease even further in the following decades. Notice that this prediction of further retrenchment might be overthrown by increases in labor productivity due to robotization.

Finally, yet importantly, the immigration shocks. Looking exclusively at Sweden, in the period 2006-2016 the magnitude of immigration has been significant (the absolute number of immigrants has constantly been higher than 100,000 people since 2006, source: Statistics Sweden, 2018). Just between 2015 and 2017, about 400,000 foreign-born persons immigrated to Sweden, one-fourth of whom are from Syria (Statistics Sweden, 2018). Is this a reason to validate the old social policy hypothesis (labeled as the welfare migration hypothesis, see the debate in the economic literature by Razin & Wahba, 2015; Giulietti, 2014) that generous welfare benefit attracts low-skilled refugees and migrants? This is not easy to discern, let alone the controversial assumption of rationality behind migrations decisions for individuals fleeing from wars. Hence, let us assume for simplicity here that refugees and migrants arrived to Nordic countries for other reasons, mostly related to personal security and established networks.

Now, the set of stylized facts described until here is rather uncontroversial. Discussion in the literature and in the broader societal & political debate focuses instead on the actual long-term costs and benefits for Nordic welfare states deriving from the immigration shocks, namely the fiscal impact of immigration. As highlighted in Ruist (2017), the debate on these estimates is rather problematic in many respects, and researchers should communicate research results in a way that avoids oversimplification. On the one hand, for the case of Sweden, Ruist (2015) computes that in 2007 (benchmark year in his calculations) the total net redistribution to the refugee population amounted to approximately 1% of Swedish GDP in that year. Although this would constitute a substantial amount for any advanced economy, 1% of GDP is not either a magnitude that is enough to hamper the fiscal sustainability of the Swedish welfare system. For the case of Norway, Holmøy and Strøm (2017) have delivered prognoses of the fiscal impact of immigration all the way to 2100. They state that, if the current level of per capita fiscal expenditure is to be maintained, from 2025 onwards the Norwegian mainland economy (abstracting from the oil sector) will have to face a yearly positive fiscal gap (as % of the mainland GDP at current prices) in order to cover the deficient tax revenues because of population ageing. By plotting realistic immigration scenarios into these calculations, Holmøy and Strøm (2017) predict that this already positive fiscal gap will enlarge each year by 2.5% of the Norwegian mainland GDP (current prices), simply because the fiscal expenditure will have to cover an enlarged population due to immigration.

Since these out-of-sample projections rely on numerous arbitrary modeling assumptions (especially for the case of Holmøy and Strøm, 2017), the above mentioned studies rather demonstrate the lack of robust estimates with regards to the fiscal impact of immigration on the Nordic welfare states. In my view, this unfortunately implies that politicians’ ideological discourses will have a relatively less demanding job in convincing voters to accept their view. On the one hand, the established parties (for instance the social democratic center-left represented by the Arbeiderpartiet in Norway and Socialdemokraterna in Sweden) have been focusing in the last electoral campaigns on the point that immigration (as a whole) is a net benefit both for the economy and for government finances in the long-term. Hence, these parties support the view of Ruist (2017) that welfare state financial sustainability is not at stake, or at least not due to immigration. In addition, center-left parties have promised to target the rising degree of wealth and income inequality. Contrary, the radical right (for instance the Sweden Democrats and Fremskrittspartiet in Norway) has instead highlighted the impossibility of sustaining the current level of benefits and social insurance in the future, especially when the number of welfare recipients is increasing due to immigration (the usual example used by these parties is the welfare-dependent low-skilled refugee). This reasoning goes more in line with the above-mentioned results from Holmøy and Strøm (2017) for Norway.

Now, let us focus on voters’ behavior in the bottom half of the income distribution in the Nordics. In the migration literature, the bottom half of the income distribution (which to some extent overlaps with the low-skilled fraction of the working force) faces more directly the consequences of immigration, both in terms of reduced wages and with regards to competition for a given amount of welfare goods. These voters are currently facing the following alternative scenarios. On the one hand, if voters interpret the immigration shocks as a manna-from-heaven for government finances (and hence welfare expenditure), due to the positive effect on the tax base, then they will support the established parties advocating for even more redistribution (regardless of who is the recipient) and opening borders. On the contrary, if voters perceive the immigration inflows as mostly low-skilled workers competing directly with them in the race for scarce welfare goods in the very short run, then they will support the radical right, or any party advocating stricter immigration rules.

Although the above framework oversimplifies reality and abstracts from different important confounding issues, it offers a concise explanation of the mechanisms at work. Looking at the recent result of the Swedish elections (where the radical right substantially increased its weight in the parliament), one could for instance claim that the promises of inequality reduction made from the center-left have not been listened to. This might be due to the above-mentioned evidence that low-income individuals in Sweden have witnessed a higher concentration of income in the hands of the richest since the 1990s, despite the fact that social democratic parties were in power. On the immigration side, one could claim that Swedish voters have given relatively more weight to the short-run fiscal impact of immigration. In other words, rather than focusing on the possible “hidden” long-run benefits of integrating immigrants into the labor force, Swedish voters have highlighted the “visible” costs of integration policies, anticipating a supposedly fiercer competition for welfare goods that they would rather avoid.

Mainstream economics doesn’t have an adequate answer to the question: ‘what causes inflation?’ Cross-posted from Michael Roberts’ blog In many previous posts, I have argued the current sharp rise in inflation rates in all the major […]

The latest shocking news about Gulf Stream instability reinforces the idea that we need to be more alarmist – not less Bill McGuire is Professor Emeritus of Geophysical & Climate Hazards at UCL, and a co-director […]