After his analysis of Ukraine’s basket case economy, Michael takes an objective look (seldom these days) at the possible effects of the war on Russia’s economy 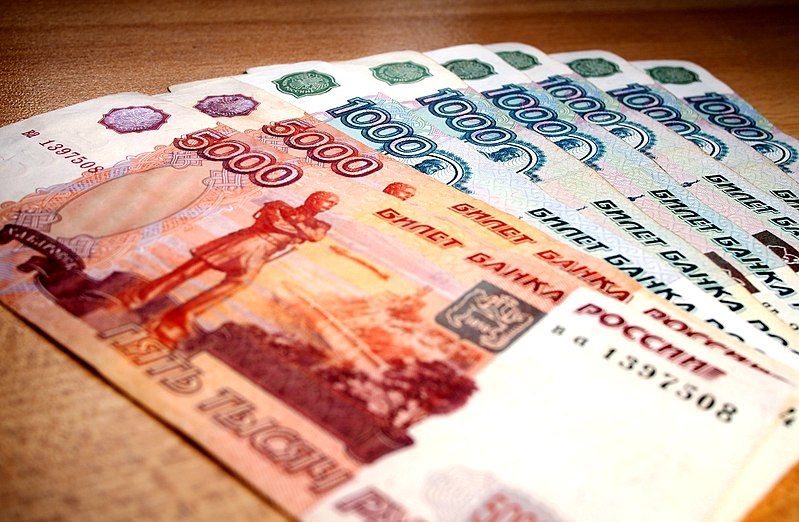 The economic war between the US-led NATO group and Russia is hotting up alongside the real war in Ukraine itself.  In response to the invasion of Ukraine by Russia, the US and Europe have upped the ante in imposing economic sanctions. The first of these was the suspension of any dealings with several leading Russian banks, including the two largest, Sberbank and VTB.  However, it was significant that the sanctions excluded Gazprombank, the major Russian lender to energy export companies.  Clearly, the West does not want to disrupt oil and gas exports through sanctions, when Germany alone relies on 40% of its energy from Russian imports.

As a result, the NATO sanctions package has substantial exceptions. Most notably, while it sanctions major Russian financial institutions, it exempts certain transactions with those institutions related to energy and agricultural commodities, which account for nearly two-thirds of total exports.  Significantly, Italy successfully lobbied to exempt the sale of Italian Gucci bags to Russia’s rich from the export ban!

So now EU leader Von der Leyen and Biden in the White House announced that “we will work to prohibit Russian oligarchs from using their financial assets on our markets.” Biden says that the US will “limit the sale of citizenship – so-called golden passports – that let wealthy Russians connected to the Russian government become citizens of our countries and gain access to our financial systems”.  The EU and the US are launching a task force to “identify, hunt down and freeze the assets of sanctioned Russian companies and oligarchs, their yachts, their mansions, and any ill-gotten gains that we can find and freeze.”

The irony and hypocrisy of these proposed measures should not be missed.  For decades, Western governments have been happy to take this ‘dirty money’ and even allow the oligarchs to gain citizenship and special privileges to exert influence in politics in their countries in order to bolster pro-capitalist parties.  Now these privileges are to be withdrawn (although we shall see how far this goes).

Russia’s super-rich (including Putin) have massively increased their wealth during the COVID pandemic.  Russia’s billionaires (we like to call them ‘oligarchs’ in the West) have the highest share of wealth to GDP of all the major capitalist economies, closely followed by ‘social democratic’ Sweden, and then the US.

Like other billionaires, Russia’s export and hide their wealth in tax havens, and in obliging Swiss and other banks and also buy property and assets abroad.  Their ‘offshore’ wealth is way higher than other billionaire groups.

Export and trade bans, the suspension of dealings with selected banks, and the withdrawal of some privileges for Russian oligarchs will have little effect on Russia.  Energy trade is to continue, with Russia still providing 25-30% of European energy supplies.  And Russia is no longer dependent on external financing.  Russia’s current account surplus has risen from below 2% of GDP 2014 to around 9% of GDP in 2021, leaving substantial buffers of excess savings that can be tapped should the need arise. The wider public sector, including the Central Bank of Russia (CBR), the corporate sector, and the financial sector are net external creditors. The CBR has over $630bn in reserves, enough to back up three quarters of domestic money supply, so there would be no need to print rubles to fund economic activity.  In addition, Russia has a $250bn sovereign wealth fund, which although relatively illiquid, could be run down to bolster funding.

Russian businesses and the government have prepared for potential future shocks like losing access to the dollar and the use of the USD in trade and financial transactions has already sharply declined. The Ministry of Finance no longer holds any USD-denominated assets in its oil fund and the CBR has also reduced the share of USD in its reserves by half, to around 20%; as the euro, and to a lesser extent the Chinese renminbi, have become preferred alternatives.  Many Russian corporates and banks now routinely include clauses in contracts that stipulate the use of another currency for settlement in case the USD can’t be used. Russia has also accelerated the use of its own payment cards, like Mir, as well as its own SWIFT-like System for Transfer of Financial Messages (SPFS) messaging service. However, both currently only operate domestically, leaving vulnerability to cross-border transactions in other currencies.

That’s why the US and European governments have now decided to introduce much more serious sanctions.  They now plan to kick Russian banks out of the SWIFT international transactions system and to freeze Russian central bank assets.  The SWIFT measure will sharply complicate the ability of Russian banks to conduct international activities.  They will be forced to use bilateral arrangements with ‘friendly‘ banks, or old technology like faxes.

But this could also damage banking and trade for Europe, in particular, if the Russian energy lender Gazprombank is also removed from SWIFT (not likely).

The most serious measure is the proposal to freeze the dollar assets of the Russian central bank.  This has never happened to a G20 member state before.  Only Venezuela, North Korea and Iran’s CBs have suffered this fate.  If effective, it would mean that Russia FX reserves in dollars could not be used at all to support the ruble in international FX markets or sustain domestic commercial bank dollar financing.  The government would have to rely on ruble financing (and the ruble is plunging in world currency markets) and non-fiat currencies like gold.

Most of Russia’s currency FX reserves are held in Western central banks.  Russia has about 23% of its reserves in gold, but it is not clear where this is physically held.  If this proposed sanction is applied, then it could seriously damage monetary flows and the Russian ruble, causing accelerated inflation and even runs on banks.

Then there are the ‘slow burn’ sanctions on Russia’s access to key technologies.  The US aims to cut Russia off from global chip supplies.  The move shuts off supply from leading US groups such as Intel and Nvidia.  Taiwan Semiconductor Manufacturing Company, the world’s largest contract chipmaker, which controls more than half the global market for made-to-order chips, has also pledged full compliance with these new export controls.  Russia is now effectively denied access to high-end semiconductors and other tech imports critical to its military advancement.  However, it’s possible that Chinese companies, especially those that have themselves been the target of US sanctions, might help Russia circumvent the export controls. Huawei could step in to develop the Russian telecom equipment market.

All in all, Putin’s invasion of Ukraine is a huge gamble which if it does not succeed in ‘neutralising’ Ukraine and forcing NATO into an international agreement, will seriously weaken the Russian economy.  And Russia is no super power, economically or politically.  Its total wealth (including labour and natural resources) is way down the league compared to the US and the G7.

The collapse of the Soviet Union in 1990 was followed by Yeltsin and the pro-capitalist government accepting the ‘shock therapy’ policies of Western economists to privatise state assets and dismantle public services and the welfare system.  A small elite, mainly former Soviet government officials, were able to buy massive state assets in energy and minerals on the cheap and through bribery and thuggery.  Russia’s oligarchs emerged, along with an increasingly autocratic regime personified by Putin.  Russia’s GDP plummeted and average living standards dropped sharply.  The Russian capitalist economy eventually recovered with the global commodity price boom after 1998, but by 2014, Russia’s average annual GDP growth was still only 1.0%.

Life expectancy in capitalist Russia has now been surpassed by China.

And when we look at the World Bank’s Human Development Index, which measures key dimensions of human development (a long and healthy life, being knowledgeable and having a decent standard of living), we find that since 1990 Russia has performed worse among major emerging economies and compared to the world average.

The Russian economy is a ‘one-trick’ pony, relying mostly on energy and natural resources exports.  After a short boom from rising energy prices from 1998 to 2010, the economy has basically stagnated.  Although Russia’s economy is larger than it was in 2014 in real terms, final domestic demand is still at its pre-2014 level. And cumulative GDP growth over this period was only positive because exports were 17% higher in real terms in 2019 than in 2014.  Russia’s capital stock is still lower in real terms compared to 1990, while the average profitability of that capital remains very low.

The World Bank reckons that the long-term potential real GDP growth rate for Russia is just 1.8% a year – and even that is faster than it has achieved in the last decade. This war is going to be costly for Russia and its people.  Oxford Economics reckons it will knock at least 1% pt a year in real GDP growth over the next few years.  If that happens, basically Russia will be in economic recession for several years.

Of course, much depends on how the war pans out.  If Putin can gain control of Ukraine, that opens up significant riches to be exploited.  Ukraine is rich in natural resources, particularly in mineral deposits. It possesses the world’s largest reserves of commercial-grade iron ore—30 billion tonnes of ore or around one-fifth of the global total. Ukraine ranks second in terms of known natural gas reserves in Europe, which today remain largely untapped.  Ukraine’s mostly flat geography and high-quality soil composition make the country a big regional agricultural player. The country is the world’s fifth-largest exporter of wheat and the world’s largest exporter of seed oils like sunflower and rapeseed. Coal mining, chemicals, mechanical products (aircraft, turbines, locomotives and tractors) and shipbuilding are also important sectors of the Ukrainian economy.

All of this remains to be fully exploited.  The EU and the US have also been drooling over the prospect of getting hold of these resources.  As I showed in my last post, the Ukraine government plans to sell off huge tracts of land to foreign and domestic investors to develop.  That could deliver huge dividends to whichever power controls the country.  Either way, once the war is over and after thousands have been killed or injured, Ukraine’s people will see little of the benefit.

Pamela Anderson – Yellow Vests and I

Pamela Anderson has put together a brilliant piece. It is conspicuous that no politician is capable of writing an article like this. It says a lot about the European political class. Pamela Anderson is a […]

Over 400 people were left injured on 10 August after clashes between protesters and police in Romania. Bianca Toma and Alexandru Damian explain the origins of the protests, which emerged in opposition to attempts by […]