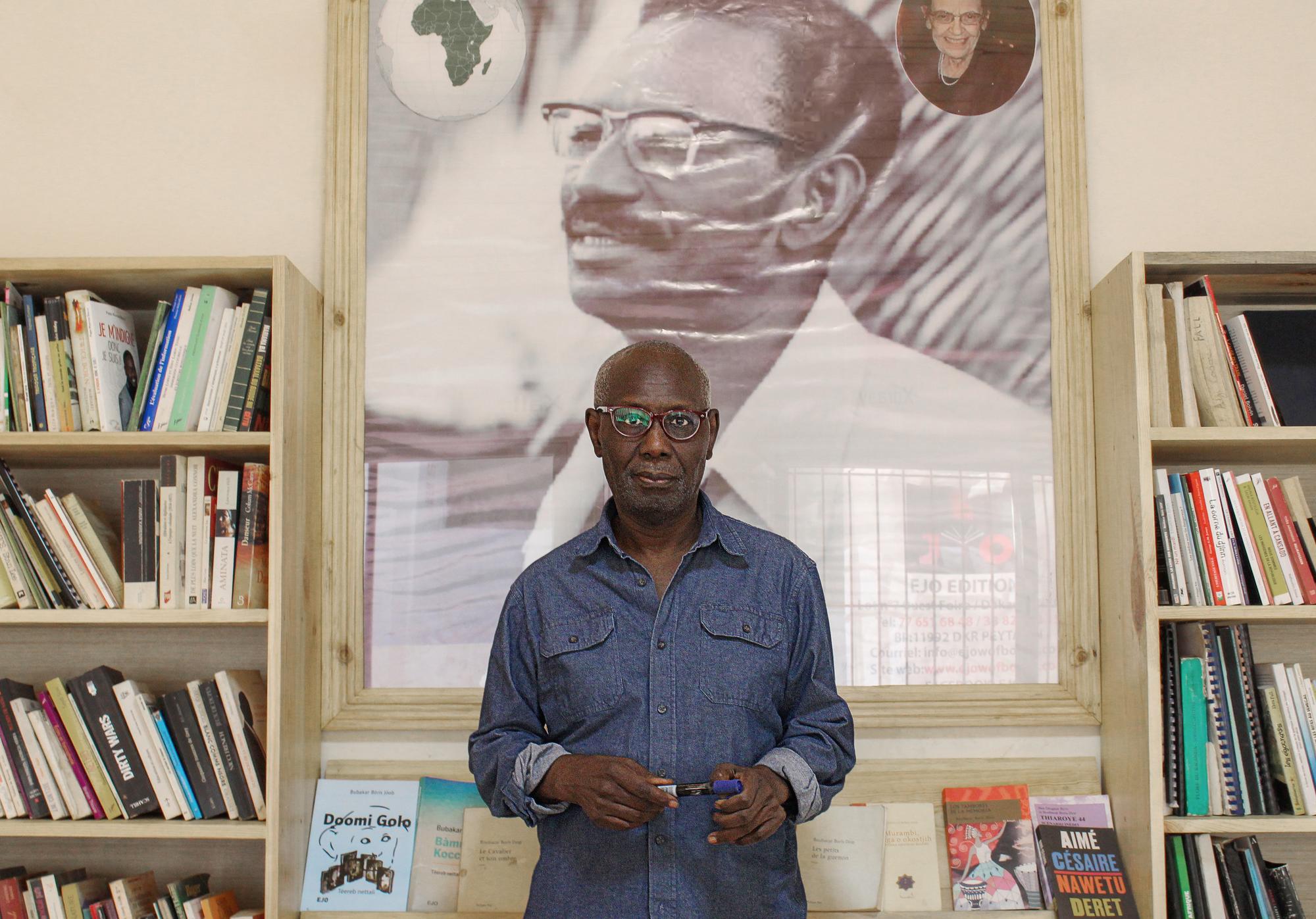 When Boubacar Boris Diop (Dakar, 1946) was a child, Senegal was a French colony and he lived in a neighbourhood created on the fringe of the city: the Medina. In Dakar – the Senegalese capital – the white settlers in Plateau, the administration quarter, didn’t want to mix with the blacks , in case the blacks infected them with any disease, but they needed them nearby so they could come to serve, clean, and care for them.

Thus was born, next to Plateau, the Medina, the place where Diop grew up and became fond of reading thanks to the stories his mother told him. Today he is one of the most prestigious writers on the African continent, thanks to novels and essays that range from the Rwandan genocide – Murambi, the Book of Bones (2709 Books, 2019) – to Africa’s relations with France – Africa beyond the Mirror (2009), The Book of Secrets (Almuzara, 2015). At the time of the interview, Diop finds himself in an office presided over by a giant portrait of the writer, anthropologist, nuclear physicist and pan-Africanist politician Cheikh Anta Diop, whom he considers a model.

What did independence mean for Senegal?

We are independent, but we are not free. France continues to rule this country through what we call “Françafrique”. After defeats in Vietnam and Algeria, Paris understood that it had to change its relations with the Africans. They put it this way: “We will give them their independence, they will have a flag, a president, a government, a national team. They will have all the symbols of political power, but we will continue to command through an elite who will obey us. Sixty years after independence we have no political sovereignty. Everything is decided by France, including the currency we use, the CFA franc.

The debate about the CFA has grown rapidly recently, especially among young people.

I think that for many years there has been a fear of talking about it among intellectuals: President Olympio, in Togo, was assassinated in the 1960s for trying to get out of the CFA. Joseph Pouemi, a Cameroonian economist who was very critical of the currency, was also murdered in 1984. Today young people ignore the mainstream media, and any one of them can send a message to Macron with a video, put it on YouTube, and get millions of people to watch it. It is a novelty that people are now talking so much about the CFA, and I am very happy about that, because three or four years ago it was a very marginal issue.

Many Senegalese risk their lives to come to Europe. If Boubacar Boris Diop were 18 today, would he follow that path or would he stay in Senegal?

When I was that age I had the opportunity to go to France on a scholarship from the Senegalese government, but I preferred to stay. I didn’t want to leave my mother, who was having financial difficulties, alone, and I remained here because I wanted to help her. In today’s context, many young people see France, Spain, or Italy as countries where you can be happy and have opportunities. Here they have nothing and they don’t see any kind of future: instead of living like wild animals they choose to leave, even if it’s very risky.

Do you think that this diaspora will help change African countries?

It’s already happening! In the elections, the Senegalese Diaspora voted for Ousmane Sonko, a very different choice from the current president of Senegal, Macky Sall. In the Diaspora we have engineers, university professors, all these intellectuals are already helping to shape current debates. This translates into actions such as that of a woman who publicly embraced the president of Senegal in London. The Diaspora is spreading the political awareness of Africans.

In The Book of Secrets, Yacine Ndiaye, one of the protagonists confesses her greatest wish: to be white and become a baroness with European surnames. Why does she want to do this?

We don’t like ourselves. If you look at it, Senegalese TV presenters are lighter-skinned. This pressure is especially aimed at women: you won’t see black men trying to become Brad Pitt. We must ask ourselves how we got to this point. In the book I presented this issue as a joke, but it is really happening.

Why is the figure of Cheikh Anta Diop so important to you?

He was the first to consider that Africa was the cradle of humanity and that ancient Egypt was a black civilization. He also promoted an important idea: we had to be proud of ourselves and think independently in order to achieve real political sovereignty.

Language was a crucial part of this struggle. The French, through Senghor [a Senegalese poet who became head of state in Senegal], managed to remove him from academic life in Senegal, but he remained in touch with the people. After independence, the University of Dakar continued to function as a French university, which is why they decided that Cheikh Anta Diop could not be in contact with African students.

In Murambi, your book on the Rwandan genocide, you comment on the role of the French. What role did France play in Rwanda?

The interim government of Rwanda, which later became the perpetrator of the genocide, was established in the French embassy. The genocidaires never ceased to have the political support and weapons of the French. Everything they needed was provided by Paris, including diplomatic recognition at the United Nations.

Each chapter in Murambi presents a character who explains his vision. What led you to choose this format?

I wanted the book to reflect all the voices, including the killers. That’s why it’s not a normal novel that goes from A to Z, but presents different voices and situations. The first character, Michel Serumundo, works at the Kigali market, returns home and his son Jean-Pierre is not there. It’s April 6, 1994, the day the genocide began. He says he’ll try to find him and that’s the end of the chapter. We don’t know anything else. Did he find Jean-Pierre, was he killed? There’s an uncertainty. Not knowing anything about what happened to so many people is precisely what happened during the Rwandan genocide.

What did you learn in Rwanda?

We don’t really know Africa. Africa is not a people: what happened in Rwanda is very different from what happened in the Congo, Sierra Leone, Ethiopia or Somalia. We have to make a better connection between our past and our present to understand the social and historical dynamics of each country.

Your neighbourship, La Medina, was created so that whites would not have to live with blacks. They lived separately, but close enough so that whites could still count on the resources and services of Africans. Do you think this is a metaphor for globalisation?

We are invaded by images, companies, and Western nations. They tell us this is globalisation, but we can’t go to their “neighbourhood”. It is very ironic that Westerners can go to Kenya, Lesotho or South Africa without a visa. But I need a visa to go to any Western country. It’s like we live in a ghetto or a big prison and they say “we need you, but please don’t come”.

João Paulo Batalha – The “captivating” tightrope walker: what to expect from the new Eurogroup head

Portuguese Finance minister Mário Centeno, hailed as the man who took on austerity and won, is taking over as Eurogroup head. What difference will he make? João Paulo Batalha is a social activist and founding […]

Politicians who are part of the system hide, as far as possible, the complicity of profit-driven capitalism in causing social problems. Richard D. Wolff is professor of economics emeritus at the University of Massachusetts, Amherst, […]

Cas Mudde – What happened to the Dutch left?

Opinion polls ahead of the Dutch general election have presented a bleak picture for the country’s three classic left parties. But were these parties ever that strong and, if so, when did they decline? Cas […]