In its bombing strategy the US/NATO decided that civilian targets were legitimate, causing many non-combatant deaths, among them media colleagues 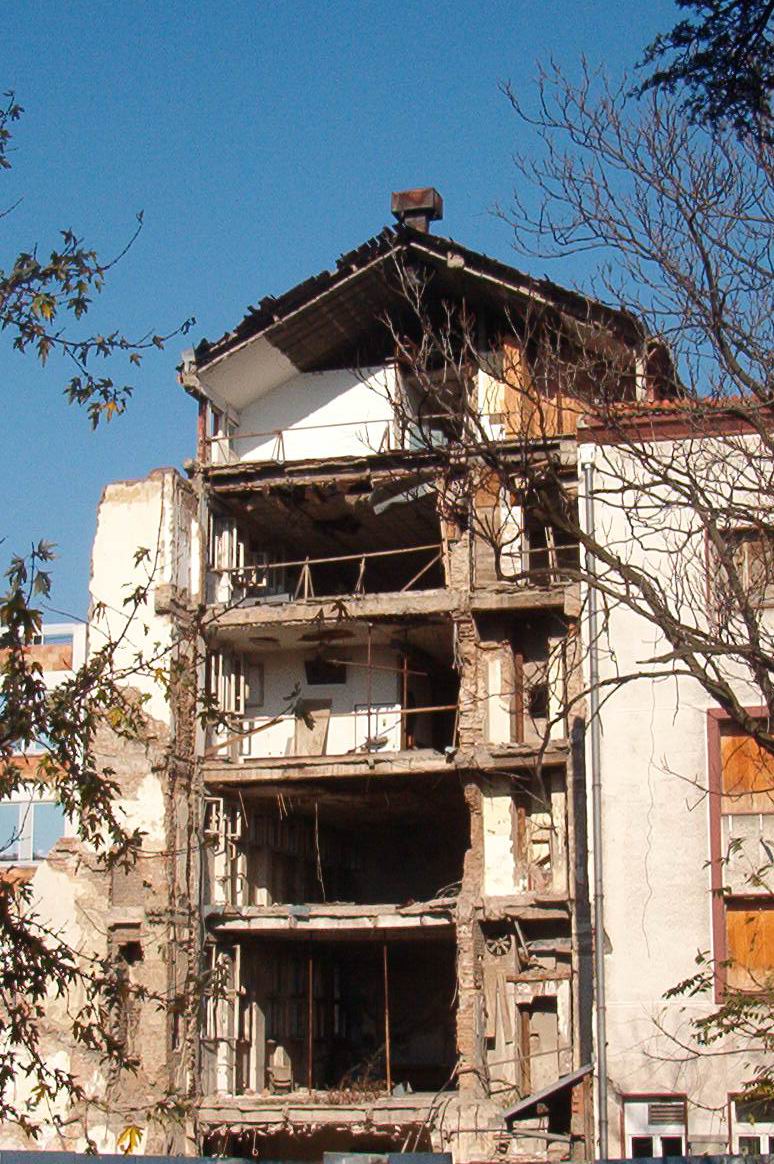 Ruins of the Radio Television of Serbia

The Russian bombing of Kiev brought back very painful memories of a similar bombing of Belgrade (1.5 million people) by NATO forces in the Spring of 1999. I was not then in Belgrade and I watched the bombing, as long as I was able mentally to do so, on US evening news. I noticed that while watching I almost had no feelings: seeing streets and houses which I knew well, including the building where I lived and where I still have an apartment, getting suddenly lit by the flame from the nearby explosions left me almost numb—as if my mind migrated somewhere else. The bombing lasted 78 days. I think I stopped watching the news after a couple of days. That whole period is just a blur for me. (I could not watch the much more brutal bombing of Baghdad in 2003, nor can I watch now the bombing of Kiev.)

Many of my family and friends were in Belgrade during these 78 days. There are several interesting experiences that are useful to share about high-precision bombing as was practiced at the end of the 20thcentury. NATO bombing was always conducted at night. The planes flew at high attitude at which the Serbian air defence could not reach them. Only one US plane was brought down (the pilot catapulted) out of probably hundreds of sorties that were made. Most of the sorties were from an air base in Italy, eponymously called Aviano, but some planes flew ten or more hours from US bases, just to bomb for a hour or so and then fly back to the US.

At first, NATO thought that Serbia will surrender quickly (meaning that President Milosevic, the then autocratic even if democratically elected leader of Serbia, would withdraw the troops from Kosovo where they were engaged in, or about to start, conducting military operations and atrocities). So, at first NATO targeted only non-civilian objects, many of them empty: different ministries which were previously evacuated (especially Ministry of Defence and Ministry of Internal Affairs), the HQ of the General Staff, Milosevic’s personal residence, the building of Socialist (formerly Communist) party etc. They were all fully or largely destroyed. These were ritualistic bombing because almost nobody was left in these building and all documents were taken out or burned. The only exception was Milosevic’s residence where NATO did hope to catch him and kill him. (More on that later).

How did my family and friends react? They were not too scared and they also believed that the bombing would last only a few days. Three days, many thought. Some slept in the basements of large buildings, others in their bedrooms. A friend refused to ever move out of her bedroom as she believed that Americans were not going for civilian targets and were so precise that the only thing she feared was that the Serbian air defence might bring down a US bomber and the debris might fall on her building. A bit like Obelix.

Since the bombing was always at night (it was in the months of March, April, May and early June) life during the day was more or less normal. There were no shortages of essential goods. The sirens would blast at the sunset or later and then people would run to the shelters, or just head back home. The US weapon of choice was the smart Tomahawk cruise missile. A friend told me that he watched it from his window fly several meters above the water for a kilometer (Belgrade lies on two rivers), make a turn exactly where the river bends and hit its target on the shore. Like in a video game.

But as the surrender was not forthcoming, NATO decided to up the ante. They began targeting thermal plants, factories, refineries (which led to frightful fires) etc. I was later working with a team that tried to assess the damage. It was difficult to do: do you use the accounting value of destroyed factories or the net present value of future income? I think we came up with $25 billion. (I will try to find the booklet and get the correct number.)

Yet the surrender was still not forthcoming. So NATO then decided to invent what its inimitable spokesman, cynic and liar, the brother-in-untruth of Maria Zaharova,  Jamie Shea decided to call dual-use facilities. These are things that could be used for both civilian and military purposes, like, for example, a bakery: it sells bread both to solders and to civilians. Things started getting ugly. In addition, NATO came up with the so-called carbon bombs which disable the system of electricity transmission (they accumulate on the wires) and thus leave the city entirely in darkness until things are fixed. This sometimes took a whole day. But when there is no electricity, there is also no water in large apartment blocks, and when there is no water toilets do not function properly. Elevators also do not work. I had a friend who lived on the 20th floor of an apartment building. He almost never went out, to the ground: neighbours would organize teams of several young persons to buy bread, milk etc. and bring it up.

Belgrade was fortunate that the bridges on which the city depends were spared. Without them the city would have almost died. Every night, crazily brave groups of some 100-200 people would gather on the bridge, singing songs and expecting (but hoping not) to die. Luckily, it never happened. Apparently, French President Jacques Chirac refused to clear bridges as targets. However, in the second largest city in Serbia, Novi Sad, two bridges were destroyed.

NATO used cluster bombs and depleted uranium (both banned by international conventions to which the US is a signatory). Several kids were killed by cluster bombs. Depleted uranium has long-term effect on higher cancer rates (although these finding are disputed by some). The effect of the depleted uranium was the greatest (because the delivery was the greatest) in Kosovo. But, since Kosovo’s population saw the bombing as liberation, there was not much incentive to research later if bombing was linked to the increase in diseases. The overall civilian toll was between 1500 and 2000 deaths (less than a half of that in Belgrade).

When I talk (rarely) about this episode, people always ask me about the US bombing of the Chinese embassy. The embassy happens to be some 300 meters from my apartment (as I said, I was not there then, but my friend was). She heard a powerful blast that broke many windows on the nearby buildings, but not hers. It killed three Chinese journalists, injured more. Was it a mistake or not? The ostensible ritualistic target was, according to the US, the Federal Office of Special Goods Exports (i.e. of arms exports). But that building is much bigger, has an entirely different shape, is two blocks away, and even the angle at which it sits is different. So I am sceptical. I think that the bombing was motivated by the stories that circulated –even I heard them—of Milosevic staying overnight in the Chinese embassy on the assumption that the Americans would not bomb a diplomatic compound. So I do not think it was an accident,

Of course, it was also the time when Novak Djokovic trained during the day only and in a swimming pool. This is often presented in the news as some funny story, but it was far from funny. As he himself has said, it has been a traumatic experience that had marked him for life.

War is not fun. It is not good in Belgrade. It was not good for the victims of the Sarajevo siege shelled by Serbian forces; it was not fun in Kosovo. And it is not fun in Kiev today. I wish that some of those who decide to bomb cities spend some time being bombed themselves. Perhaps they would think twice about ordering such attacks. We should all hope that none of them ever happens again.

Concerns have been aroused that a new wave of privatisation could be prepared after the European Commission asked KPMG to study the “operational and fiscal challenges” which state-owned enterprises place on the public purse. The […]

Do not panic!  What appear to be confusing, complicated economic formulas are explained by Frances, so the article is accessible to all of us. And what she writes is of great importance. This is what […]