We all live in our ideological worlds and imagine that everybody else inhabits the same one too. 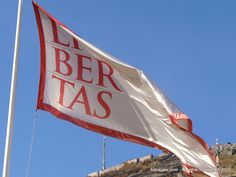 In the Summer of 1975, I worked as a tourist guide in Dubrovnik (I started working very young). Dubrovnik is, as many people know, a beautiful city on the Adriatic, on the Croatian coast, that throughout the Middle Ages was a very active port, with contacts throughout the then known world. Venice was its competitor and eventually dominated it; at the end however both the Venetian and the Dubrovnik (Ragusan) republics were abolished by Napoleon in 1797-1806. The existence of Dubrovnik as an independent republic, surrounded on all sides by the powerful Ottoman Empire, was somewhat of a miracle. Ottomans might have regarded it as a useful Hong Kong of the time and never mustered the will to conquer it. Dubrovnik always remained proud of its freedom. In its red flag it emblazoned the golden letters of “Libertas”.

A couple of times that Summer, I went, in the warm and sweet lavender-filled evenings, to watch plays performed at breathtaking spots in the fort overlooking the harbour. The plays were part of a summer-long Dubrovnik festival. The opening of the festival was always accompanied by the raising of the “Libertas” flag. I did not think much of it then but the flag ceremony with appropriately rousing music was taken by me to hail back to Dubrovnik’s steadfast resistance to foreign invaders. Since Yugoslavia in 1975 was a free country, not ruled by foreigners, or as, it was said then, beholden neither to “imperialists” (the United States), nor to “hegemonists” (the Soviet Union), I thought it only normal that the flag of “Libertas” be hoisted and cheered.

About ten years later, in a conversation with a friend who watched the same festival, and with communist rule already crumbling, he mentioned how excited he was seeing the fluttering flag of freedom every year; to him it presaged the end of communism and the return of democracy. I never thought of that then, and, without telling him, I believed that he either made up that feeling ex post (1985 was very different from 1975) or that he simply imputed to others what might have been the thoughts of a tiny minority.

Then a few years ago, when I visited Zagreb the first time after the civil wars, I met for dinner a Croatian friend whom I have not seen for more than twenty years and with whom I worked in 1975. Somehow during the conversation, she mentioned how the flag of “Libertas” always made her think of Croatian independence and freedom and how she thought that feeling was shared by everyone who was there and saw the flag being raised.

That thought, I had to acknowledge, never crossed my mind. But that third interpretation of the very same event made me think, like in Kurosawa’s movie, that we all live in our ideological worlds and imagine that everybody else inhabits the same one too.

Something similar is happening now in the United States with the ideological impact of the Black Lives Matter movement. Many people thought that racial inequality was indeed an issue in the United States. But it was seen as an ancillary issue, in need of a solution, but not in itself detracting from the view of America as a land of equal opportunity and progress for all. Under the impact of the movement, racial injustice, and many other forms of injustices, are now seen, by many people who never thought so before, as systemic problems. They cannot be made aright by, as Cornel West dismissively and well said, “putting Black faces in high places”. They require a thorough rethinking of the essential features of capitalist societies. Moreover, BLM movement, by bringing into the focus the entire colonial history and Black oppression, has directed our attention to the things which were thought long gone and “solved”: King Leopold’s rule of the Congo, British use of and complicity in slave trade, American and Brazilian slaveries that extended late into the second half of the 19th century. It is very likely that similar issues will be raised soon in other countries: France, the Netherlands, Portugal, Spain, Russia. As we have just seen, the statues of Christopher Columbus are tumbling down.

This is a huge ideological change. We were, until a few weeks ago, witnessing the same events as now—racial discrimination and police brutality are not exactly new—but the ideological lenses through which we were seeing them were entirely different. As in the example of the Libertas flag, the event, the fact, was the same: the understandings  different.

Ideologies we live are like the air we breathe. We take them as obvious. We are not aware of them, as I was not aware of my own in 1975. Or as my friends were not aware of the ideology that pervaded the World Bank and the IMF in the last two decades of the 20th century. Neoliberalism (which did not use that name then) was so obvious, its lessons and recommendations so clear and common-sensical that it fulfilled the requirements of the best possible ideology: the one that a person defends and implements without ever realizing he is doing so. But it too is now falling apart.

When people ask me how it was to have worked in the World Bank at the time of high neoliberalism, they often believe that we were somehow compelled to believe in the nostrums of neoliberalism. Nothing is further from the truth. Ideology was light and invisible for many; they never felt its weight. Even today I am sure that many friends who implemented it are unaware they ever did. In the early 1990s, an influential person, who would never consider him/herself “neoliberal”, strongly objected to any work on inequality: the issue was not inequality—on the contrary, we needed to create more inequality so that growth can pick up. Another influential person (Larry Summers in this case) became infamous by writing a memo that argued that pollutants should be shipped to Africa because the value of human life there is much lower than in rich countries. Although Summers later claimed that the memo was written in jest, it did capture well the spirit of the times. Yet another person who strenuously even now defends him/herself of the neoliberalist tag produced a new approach to a problem that, proudly claimed, solves it by creating a new market. Never having heard that commodification of everything is the basic characteristic of neoliberalism. No Polanyi or fictitious commodities in his world.

Alike to religious believers, neoliberalism seemed to many economists a quintessence of reasonable, common-sensical ideas. John Williamson wrote when he defined the Washington consensus that it is “the common core of wisdom embraced by all serious economists”. Now that neoliberalism, under the shocks of 2007 and 2020, is all but dead, it is easy to see how wrong they were. But while it lasted, people lived in their own ideological worlds, “embraced by all serious economists”, and it seemed to them that everybody else did too. And that it would last forever. As it seemed to me—in 1975.

Charles Adams – The measurement problem in political economy: a solution

It is accepted that Gross Domestic Product (GDP) is not fit for purpose, especially in this age of climate change. Charles Adams proposes an alternative. Charles Adams is professor of physics at Durham University in […]

“Global coordination is impossible while imperialist powers dictate the terms.” Michael Roberts is an Economist in the City of London and a prolific blogger Cross-posted from Michael’s Blog Inflation, risk of global recession, growing inequality and […]