How economics help us to understand political and social movements I wrote this in a Twitter discussion about the importance of knowing and reading classical texts in economics (say, from Quesnay to Pareto although these end-points are fairly arbitrary).

I would like to explain what I meant by these definitions. The first definition is clearly Marxist in the way it is written, but substantively it is the same definition that can be found in works as far apart historically and even ideologically as Adam Smith and Kenneth Pomeranz. In this view of economics, its role is to illuminate economic factors that have led to systemic changes, to people moving from one way to organize production to another. It is Smith’s stadial theory of economic history, from “the rude state of society” of pastoralists to the commercial society of his time. It is of course Marx’s view too. But it is also the point of view of whoever has studied (say) Roman Empire, its economy, and the dissolution of the manifold links that kept the Western Empire together: Michael Rostovtzeff or Moses Finley. It is a view of economics common to Paul Bairoch and Fernand Braudel. So, it is not a predetermined ideological position, but the methodological approach that is important here.

The second definition (due to Alfred Marshall) is, I wrote, much more pragmatic. It looks at the ways of improving people’s lives. It is related to the first definition when, under the first definition, we believe that societies tend to choose more efficient ways of production over the less efficient. Through the Darwinian struggle of different modes of production, the most efficient wins, and that most efficient mode increases people’s incomes the most. (Assuming here that we look at people’s incomes broadly, and not only at the mean income which may be misleading.) The second definition allows you not to worry about the grander historical forces but to focus, here and today, on how to make things better.

The third definition is Lionel Robbins’. That definition narrows economics very significantly. Economics becomes similar to operation research. It is not interested in the succession of different systems, not even in improvements in welfare as such, but in optimization. It could be used under any system. It is not surprising that Tjalling Koopmans and Leonid Kantorovich, working in two different systems but both interested in optimization,  came up with very similar findings. The “scarcity => ends” definition can be used to best allocate inputs and people in a factory whether it is privately- or state-owned, to maximize work effort of inmates of a labour camp or of cotton-picking slaves.

The fourth definition is beyond pragmatic. It is concerned with own, or people one works for, immediate maximization of income; it ignores everything that is not useful for that purpose, and blurs the difference between a social science and the profit-making of a single business. It is Gordon Gekko in action.

If you think that these distinctions are too abstract, here is an example to show how they are very much concrete and are in reality applied right now. You can study China by asking the question of whether it is capitalist or not, whether its opening and marketisation that began in 1978 is just one very long NEP or an irreversible change; whether Chinese economic history leads us to believe the country will evolve in one or another direction. You are then applying Definition 1.

Or you may not bother with decisions that led China to liberalize in 1978, but focus on policies that reduced poverty, increased its income, or widened disparities between the affluent and the poor. You are applying Definition 2.

Or you can discuss whether the state-owned Chinese banking system is allocating loans in the best way or not: here you are working under Definition 3.

Or you can write an article discussing if Evergrande will pay its creditors next week or not. You are in the world of Definition 4.

I was always interested in Definition 1. It gave economics its magisterial gravitas. It showed why economics matters. When I began the work on global inequality more than two decades ago, I never saw it as a mere work in empirics. Empirics is important as the first step, but one should try (if possible) not to stop there. I was not quite successful in going beyond (and I criticize myself for that in my forthcoming book). Still for me global inequality was always more about global politics, economics, and indeed power, than about numbers. 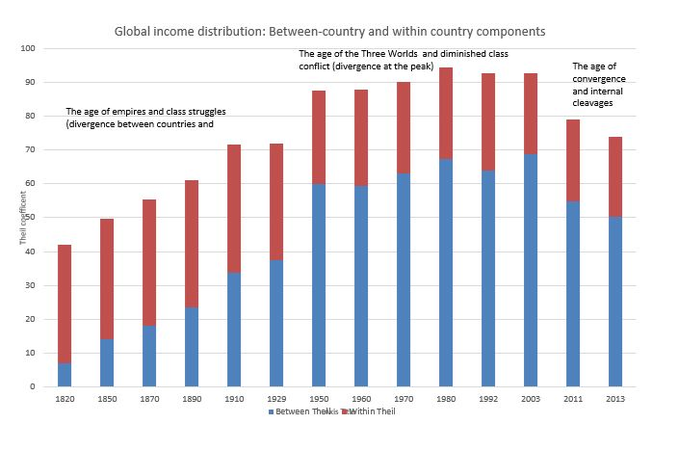 The rising global inequality in the 19th century was simply a reflection, in numbers, of the greatest ever divergence in power between two parts of the globe: the West and the Rest (see the graph). You could not discuss these numbers without realizing that the rising between-country inequality “explained” or “reflected” (both are probably true) the 1840s Opium Wars and the Indian Rebellion of 1857. Behind increasing within-national inequalities was the class struggle: the Revolution of 1848 and the Emancipation of serfs in 1861.

Then the high plateau of global inequality in the middle of the 20th century showed us the newly-parceled three worlds: the first world of rich capitalist countries; the second world of socialism; and the third world of Asia, Africa and Latin America. You cannot understand the work of Frantz Fanon and Samir Amin without knowing that in the background there existed three non-overlapping worlds. You cannot see where Bandung came from if you do not see this graph (or have similar knowledge anyway).

And finally, and most recently, the decrease in global inequality is simply the translation for the rise of populous Asian countries. This mirrors the Industrial Revolution: the centre of economic gravity is tilting towards one region, the losing areas are deindustrializing, and as Asia catches up, global inequality is reduced. Political and economic implications of this change are obvious to all: the US vs China conflict is written there in scarlet letters. You do not need to look for its causes in politicians’ speeches.

What will come in the future we do not know. Will the equalizing trend continue? Africa, with high population growth and lack of income convergence, may push global inequality up again, and become additionally marginalized. Or it might replicate Asia. China may become (and is already becoming) too rich to exert a downward pressure on global inequality and the two new hegemons (China and the US) may in two generations from now be in a group of their own.

The economic and political structure of the world today is very different from those in 1921 or 1971. All of that is not only reflected in global inequality numbers; these numbers help us understand political and social movements. This is how I see global inequality work as proceeding according to Definition 1.

Yesterday, on the hottest day ever recorded in the UK, the Government  launched its plans for delivering net zero aviation which is due to unleash unlimited growth of the sector. ‘Badvertising’ is a campaign to […]

Albert Noguera – Spain: Two taboos that prevent the fight against the far-right Vox

Courageous legislative measures against the far-right cannot be adopted unless two of the great taboos of Spanish political culture are first broken. Albert Noguera is Professor of Constitutional Law at the University of Valencia. He […]