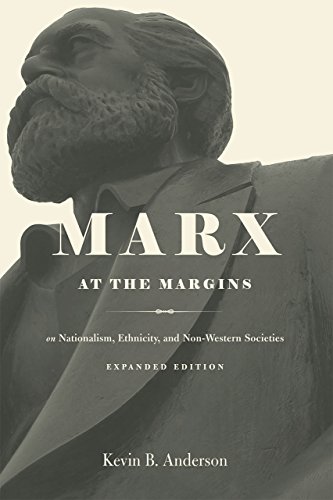 The goal of this very well-researched and well-written book is to show the evolution in Marx’s thinking away from the unilinear view of historical evolution, going from primitive communism to slave-owning societies to feudalism to capitalism and, in the future, to socialism and communism. This unilinear scheme of history that in Capitalism, Alone I called the “Western path of development” (WPD) is the ”bread and butter” of classical Marxism. It was based though, as many have argued, and Kevin Anderson very persuasively shows, on a generalization of West European history. It could not be transplanted elsewhere nor used to explain the rest of the world.

Marx was aware of that and introduced his famous “Asiatic mode of production” characterized by land ownership in common (whether by consanguine communities or not) and by an overarching hierarchical authority on the top. It was a prototype of what was later defined by the Marxist scholar Karl Wittfogel as the Oriental or “hydraulic” societies. The Asiatic mode of production always sat rather uneasily within the Marxist framework because one could not say much about its evolution: whether such societies tended on their own to become capitalist, including by creating private ownership in land, or not. Even less could be said about their socialist prospects: but if so, how could “scientific socialism” argue for global validity?

Anderson shows that Marx in his early period, which we may date to the late 1850s, was both Eurocentric and, in a few passages where he discussed the Asiatic mode of production he assumed that it was ahistoric and unchangeable.

Things began to change in the 1860s, under the influence of political developments outside Europe. They led Marx to begin studying much more seriously non-(west) European societies: the origin, history and class structure of agricultural societies without private ownership of land, their similarities and differences with such early European societies (of Germanic and later Slavic kind). The political events of late 1850s-early 1860 that attracted Marx’s attention and on which he wrote prolifically (mostly as the European correspondent of the New York Daily Tribune and also for Die Presse in Vienna) were the Taiping uprising in China (1850-64), the Sepoy rebellion in India (1857), the end of serfdom in Russia (1861), and the American Civil War (1861-65).

Anderson dedicates a whole chapter to Marx’s and Engels’ writings and mutual correspondence regarding the American Civil War. As is well-known, both were strong supporters of the Union, and admirers of Lincoln—even if Marx tended to criticize him for timidity—but only to be pleasantly surprised and impressed when Lincoln fired General George McClellan and issued the Emancipation Proclamation. Engels, who had considerable military training, was less sanguine about the chances for an outright Northern military victory. Marx, who paid more attention to the social forces and the position of various classes and groups both in the South and the North, never doubted Northern victory, even at the times when Britain was on the verge on intervening on the side of the South.

The discussion of the American Civil War is important because it lets us see how Marx approached and combined the racial and the class questions. Perhaps this quote from a 1866 letter to François Lafargue (later repeated verbatim in Capital), “labor in the white skin cannot emancipate itself when in the black skin it is branded” summarizes best his opinion. But it leads us astray from the main point of the book, namely non-European nations’ transition to capitalism. Here India and, especially, Russia played a key role in the evolution of Marx’s thinking.

In the period up to the publication of Capital (volume I), Marx regarded Russia, as European liberals of the age did, as an extraordinary reactionary power, dictatorial internally and supporter of anti-revolutionary forces externally: “It is in the terrible and abject school of Mongolian slavery that Muscovy was nursed and grew up…Even when emancipated, Muscovy has continued to play its traditional role of a slave as a master” (p. 48; written in 1856). Russian intervention on behalf of Austria in 1848-49, the creation of the Holy Alliance, the Crimean War, and bloody suppression of several Polish uprisings all fitted that image.

The change in Marx’s views, and greater interest in Russia, began after the publication of Capital when the Russian translation (which was the first translation of Capital, in 1872) attracted not only an unexpected interest among intellectuals and revolutionaries in Moscow and St Petersburg but also very astute and pertinent commentaries, quoted by Marx in extenso on several pages in his introduction to the second German edition of Capital.

Marx’s new-found interests in things Russian, which led him to learn the language and read a number of Russian books in the original, had another important consequence. Russian Marxists posed the following question: could socialism in Russia sidestep capitalist development and use the land held in common (the Russian mir) as the basis for future socialization of the means of production? The question was whether the “natural” evolution was always such as to move from communal land ownership to private small-holding and then eventually into socialism, or could private small-holding be simply skipped?

The same problem was faced elsewhere: in India and Algeria. In both cases, to which Marx directed his attention, the colonial authorities encouraged privatization of land. That was the way in which the colonists hoped to get hold of the land. If each parcel of land is held in common by a clan or extended family and cannot be alienated, how are French and British colonists going to get any of it? But if it is parceled out into private holdings, these individual lots can be either more easily expropriated or purchased from the new owners. This is why the French were keen to break clan ownership in Algeria, and the British helped zamindars become formal owners of land (zamindars were originally tax farmers who collected taxes from the peasantry and kept a part for themselves but did not own the land).

Everywhere thus, including in the Russian case (the land privatizations after the end of serfdom), the movement seemed to be towards the breaking-up of the communal ownership and the introduction of “land capitalism.” Still, the more Marx studied non-European societies, the more aware he became, Anderson argues, that the WPD did not necessarily apply to them: there was no equivalent to West European feudalism, and the future of rural communes was not preordained. It is in that context that Marx’s famous 1881 letter to Vera Zasulich, the Russian revolutionary, was written. The importance of Marx’s letter cannot be overestimated. It is shown by the fact that Marx, a compulsive and fast writer, made no fewer than five drafts of the letter, each more detailed than the short letter he finally sent. He explicitly circumscribed the validity of his analysis: “The ‘historical inevitability’ of this course [i.e. his analysis in Capital] is therefore expressly restricted to the countries of Western Europe”; and he allowed for the possibility of skipping the capitalist stage: “The analysis in Capital therefore provides no reasons either for or against the vitality of the Russian commune. But the special study I have made of it, including a search for original source­ material, has convinced me that the commune is the fulcrum for social regeneration in Russia. But in order that it might function as such, the harmful influences assailing it on all sides [meaning most likely the privatization of land] must first be eliminated, and it must then be assured the normal conditions for spontaneous development.”

Towards the end of his life, through an evolution driven largely by political events outside Europe and Marx’s extensive readings, Marx came to believe that the evolution he and Engels sketched in 1848 was valid for Western Europe alone and perhaps confined to it. It is only within this context that we can understand the apparently barren last decade of Marx’s life when, rather than completing the remaining volumes of Capital, he spent an inordinate amount of time studying the minutiae of Russian and Indian land ownerships, geology, the pre-historical societies and the like.

David Ryazanov, the first editor of Marx’s and Engels’ collected works, criticized Marx for this apparent waste of time: “Why did he waste so much time on this systematic, fundamental summary [of various books] or expend so much labor on one basic book on geology, summarizing it chapter by chapter. In the 63rd year of his life—this is inexcusable pedantry” (p. 249). However, according to Anderson, the “waste” can be understood if we realize that Marx, unsatisfied with the WPD and his non-historical “Asiatic mode of production”, was, albeit unsuccessfully, trying to generalize the pathways of transition to capitalism by looking at the world as a whole, no longer Europe alone.

Ukraine is politically and economically a basket case, controlled by a corrupt oligarchy solely interested in extracting wealth and a political class keen on getting the crumbs that fall from that table. The only thing […]

Trump vs. Democracy Thomas Klikauer teaches MBAs at the Sydney Graduate School of Management, Western Sydney University, Australia. Nadine Campbell is the founder of Abydos Academy Ever since it was invented and written about by […]

Why are people currently buying bonds? Because they want safety. And they do not believe equity markets can provide that. Richard Murphy is Professor of Practice in International Political Economy, City University of London. He […]