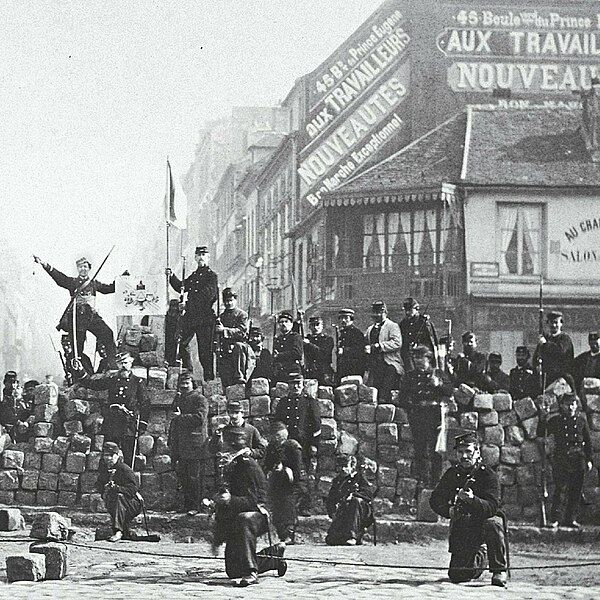 While writing the chapter on Marx and on how he thought about inequality for my new book, I reread most of his writings (and read some that I have not read before). Because Marx’s discussion of class structure –crucial also for his understanding of inequality—is most clearly exposed in the discussion of the 1848 revolution in France contained in The class struggles… and The 18th Brumaire…, I reread them. The class struggles is a compendium of articles, written during the Revolution, for a German newspaper. The 18th Brumaire is Marx’s analysis of the rise and fall of the proletarian power between February 1848 and the assumption of dictatorial powers by Louis Napoleon at the end of 1851. On my new reading The 18th Brumaire seemed much better than I remembered it, perhaps because reading one after another The class struggles and The 18th Brumaire allows to follow the events described by Marx much better, and thus to understand his analysis and conclusions.

It is unfortunate that the English edition that can be found on Amazon is old, with the translation dating from 1897, and with a number of typos and odd turns of phrase. The book absolutely cries out for a new translation and a good editor, because many events mentioned there are not well known and Marx’s numerous allusions to historical or mythical parallels are difficult to follow unless one knows very well both French history and Greek myths.

In an excellent introduction to the French edition of Souvenirs and an equally remarkable postface, written respectively by Fernand Braudel and J. P. Mayer (the editor of Tocqueville’s collected works), they both make direct comparisons between Tocqueville and Marx. J. P. Mayer finds Souvenirs “infinitely superior” although he admits that Tocqueville was never as close in his social analysis to Marx as he was here. Tocqueville (unlike Marx) “does not judge his time using the norms that were not those of the time itself”; moreover, “Tocqueville was a realistic sociologist, Marx was a utopian” writes Mayer. Braudel is not so sure in the comparison, avoids a direct judgment, and seems to put the two works ex aequo.

Our two authors (Marx and Tocqueville) start from almost opposite personal and ideological positions. Tocqueville was a member of parliament until the 1848 Revolution, and remained in Parliament after the Revolution, having won in his ancestral region (by garnering 110,000 votes out of 120,000) in the first election with a full adult male franchise in history. In 1849, after the second wave of the revolution was crushed, he became briefly the Minister of Foreign Affairs. Marx, thirteen years younger, was a revolutionary exile in France, soon to be expelled to England. Tocqueville directly participated in the events; Marx was an observer and during much of the period in Germany. Tocqueville’s Souvenirs are obviously a personal and insider’s view of the revolution; Marx’s are a study done by a revolutionary outsider. Tocqueville was against the revolution, Marx in favour.

There are three elements however where their views fully converge. They are the nature of the 1830 Louis-Philippe regime, the politics of Parisian proletariat, and the role of peasantry.

The 1830-48 regime was, for Marx, the rule of “high finance, large industry, large commerce, i.e. [of] Capital with its retinue of lawyers, professors, and orators…. [It] was but the political expression for the usurped rule of the bourgeois upstarts” (p.26). The power was held by an “aristocracy of finance” legitimized by a monarchy.

Tocqueville, while being an MP for almost ten years during Louis-Philippe reign and bitterly opposed to the 1848 Revolution, has only damning things to say about the rule of the bourgeoisie between 1830 and 1848:

The particular spirit of the middle class became the general spirit of government; it dominated foreign policy as well as internal affairs: an active spirit, industrious, often dishonest, generally orderly, bold out of vanity and egoism, timid by temperament, moderate in all things except in its taste for comfort, and mediocre; a spirit which, mingled with that of the people or of the aristocracy, can do wonders, but which alone, will never produce but a government without virtue and without grandeur. (p. 40)

Because it is a very personal book (after all, it is Souvenirs) and because it deals with contemporary France, Tocqueville expresses more clearly than elsewhere his anti-bourgeois aristocratic prejudices. It is notable that the only unambiguously positive portraits in the book, which contains many, are of those socially inferior to Tocqueville (peasants in his ancestral village who are shepherded by Tocqueville to vote en masse for him, and his own man-servant) while the short sketches of the ruling bourgeoisie, other MPs, Tocqueville’s friends and even of his sister-in-law (as well as of Louis-Philippe and Louis Napoleon) are often “deadly” in their detail, where every personal virtue mentioned is followed by a much more serious vice.

The second thing on which Marx and Tocqueville agree is the egalitarianism of the Parisian proletariat. In The 18th Brumaire, which presents a uniformly negative description of all social groups except for Parisian proletariat, its egalitarian spirit is exalted; in Tocqueville, it is considered unrealistic and dangerous, born of “cupidity and envy”: “I saw in Paris, a society split in two: those who had nothing united in a common envy [convoitise]; those who possessed something, in a common worry [angoisse]” (p. 162). Yet, Tocqueville makes two extremely important points.

First, he argues that after all other social privileges, from class-based legal inequality to differential taxation, had been abolished by successive revolutions, inequality in property has remained in many people’s minds the only visible obstacle to full equality:

…and [unequal property] remaining the only obstacle to equality among men, and seemingly its only obvious sign, wasn’t it necessary…that it should be abolished in its turn, or at least that the idea of abolishing it came to the mind of those who did not enjoy it [property]? (p. 130)

The elimination of inequality in property, and perhaps even the very elimination of private property, remained, for some, the last and necessary step toward full equality. Tocqueville, of course, does not approve of it, but notes the logic of political developments leading in that direction.

Then, in just two paragraphs below he makes an even stronger statement:

I am tempted to say that what we believe are necessary institutions are just institutions to which we are accustomed, and that in matters of social organization, the field of the possible is much vaster than men living in any given society can imagine. (p. 131).

One could just copy that sentence and put it into The 18th Brumaire and nobody would notice anything strange.

The third topic of agreement is the role of peasantry. Marx does not have nice things to say about French small landholders who tasted the pleasures of private property after the land was distributed widely after the 1789 Revolution.

The allotment farmers are an immense mass, whose individual members live in identical conditions without however entering into manifold relations with one another. Their method of production isolates them from one another, instead of drawing them into mutual intercourse. This isolation is promoted by the poor means of communication in France, together with the poverty of the farmers themselves. Their field of operation, the small allotment of land that each cultivates, allows no room for a division of labour, and no opportunity for the application of science; In other words it shuts out manifoldness of development, diversity of talent, and the luxury of social relations. (p. 78).

He argues moreover that they were the main supporters of Louis Napoleon when he decided to take power. Tocqueville does not cover this last issue because it falls outside the chronological limits of his book, but he agrees that the opinions in the countryside were very different from those in Paris.

A certain demagogic agitation reigned among the city workers, it is true, but in the countryside, the property-owners, whatever was their origin, their antecedents, their education, their very property [biens], became closer to each other…Property, among all those who enjoyed it, became a kind of fraternity. The richest were like older cousins, the less rich like younger cousins; but they all considered each other like brothers, having all the same interest in defending their inheritance. Because the French Revolution [of 1789] has extended the possession of land to infinity, the entire [rural] population seemed to be included in that huge family. (p. 146).

Thus despite markedly different preferences and points of views, the convergence between Tocqueville and Marx on these three important points in the study of the same historical event is remarkable–and worth noting.

Germany will not be the same again. The week of protest against the climate crisis in the coal-mining region on the Rhein Hauke Benner is a former journalist and currently a political activist against climate […]