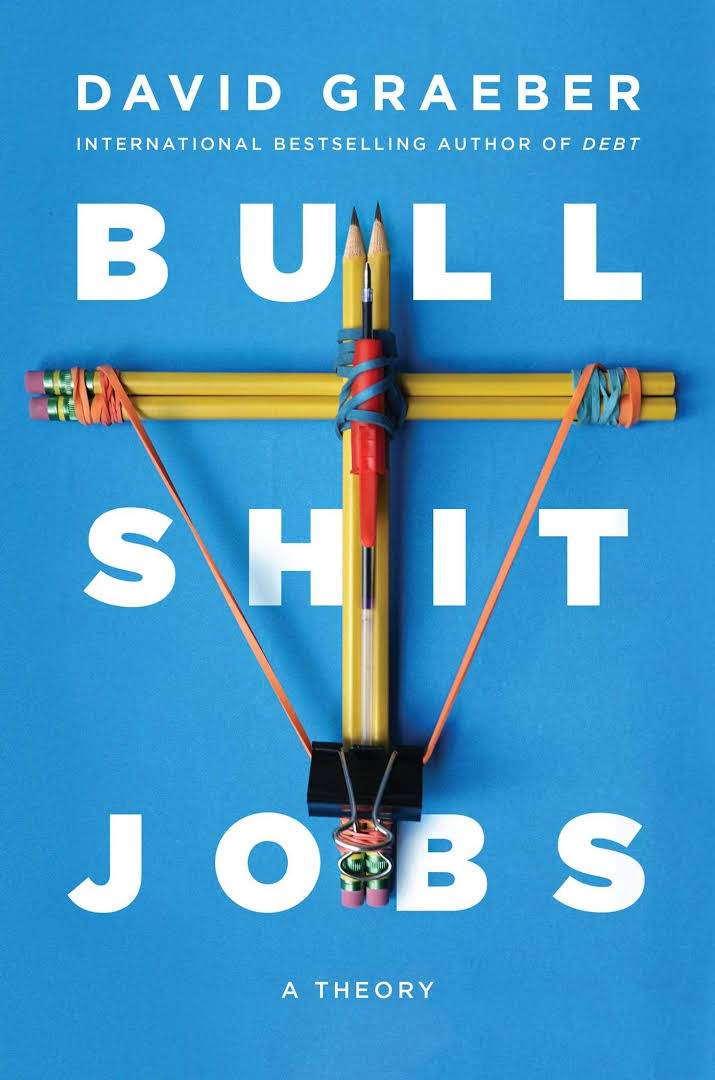 “I would like this book to be an arrow aimed at the heart of our civilisation.” So writes David Graeber in his preface to Bullshit Jobs, A Theory. David Graeber, professor of anthropology at the London School of Economics, caused a small sensation in 2013 when he published an essay in a new radical magazine, Strike! It asked why a utopia has never materialised in which all menial work is done by robots and we are all people of leisure. The reverse seems to have happened. Many people are working in “bullshit jobs”, jobs which are not contributing anything to human happiness or prosperity, while working hours, and many categories of service jobs have increased. These workers, who might be corporate lawyers, bankers, tax officials, waiters, warehousemen or factory workers, feel trapped and frustrated but often are unable to quit for economic reasons.

The essay unleashed a storm of tweets and emails in response, which Mr Graeber has collected and published in book form, with some analysis and commentary. “In a way the book can be seen as a collaborative project,” he writes.

On one level the tome is rather indigestible and more than a little depressing. The litany of people called Tom, Pablo, Ben, Chloe, Lilian, telling us why they feel trapped, demeaned, even abused, but mostly are unable to get out of their job, tempts the reader to cry out: “For heaven’s sake quit. Or, if you can’t quit, be a little more imaginative in handling your job.” I am reminded of the hero of John Kennedy Toole’s A Confederacy of Dunces who dealt brilliantly with a backlog of files by binning them – his creative response to being in a bullshit job.

Most alarming is the proliferation of jobs in management or administration in both the public and private sectors. When jobs are cut in a company or hospital or university, the bullshit jobs are the ones that tend to survive. That is more a factor of who has the power.

Part of Mr Graeber’s mission seems to be to cast corporate flunkies, business consultants, university administrators and financial services employees as the villains: their jobs have proliferated despite the financial crisis, while austerity has hit teachers, nurses, policemen and others doing far more “socially useful” jobs.

That distracts a little from the wider and more serious issue: that many in our society are driving themselves, or being driven, into jobs they hate.

A columnist at The Economist, in response to Mr Graeber’s original article, surmised that the proliferation of bullshit jobs is the result of globalisation. Processes are becoming increasingly fragmented, and with them the scope of people’s jobs.

Adair Turner, writing recently in Project Syndicate, examines the economic effect of what he calls zero-sum jobs. These are jobs which could be seen to militate against each other – for example a fund-raiser for one charity competing for the same funds as a fund-raiser for another charity: no extra money is raised. These may not be bullshit jobs – they may be quite rewarding for the worker. But in terms of economic effect they are zero-sum.

Lord Turner sees these jobs as having a distributive function. More and more skill and economic effort are being concentrated on distributive jobs, while there is a natural erosion of jobs in, say retail, or in factories, because of automation. The zero-sum jobs would include developing competitive brands, financial engineering, market analysis, tax-planning. Eventually, he says, almost all human work might be devoted to zero-sum activities.

That is assuming we don’t find alternatives and change our life-style from workaholics to men and women of leisure. Mr Graeber suggests two possible changes, though he insists that is not the purpose of his book. One would be a drastic reduction in working hours to around 15 a week. The other would be a universal basic income (UBI), an idea which has frequently featured in the pages of Brave New Europe.

The trouble is, the work ethic is something that has been drummed into us since the early days of Britain’s Industrial Revolution – ever since clocks appeared on factory walls. According to Mr Graeber we have chosen consumerism over more free time. In other words most of us dash from the workplace to the gym, to holiday-break destinations, to therapy sessions, rather than address the question of our bullshit job.

Mr Graeber’s original article shot the arrow. This book is more a shower of arrows, and the reader is left to decide which are on target. But it certainly opens a window onto a sad and horribly familiar world, created by ourselves.

Book review by Alessio Kolioulis Alex Foti is a veteran of the autonomous movement living in Milan. In the late 1990s, he was among the thousands of ‘no-global’ activists who built a Europe-wide network against […]

Saving Britain by Will Hutton and Andrew Adonis

Book review by David Shirreff This is a passionate, well-argued plea for a European Britain, written by two avowedly socialist Remainers. They will not accept the standard disqualifier: that the EU is a collection of […]