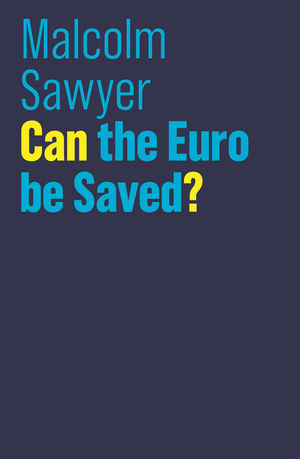 The answer is yes. But saving the euro will be immensely difficult, and will require political, ideological and institutional changes. The euro always had serious design flaws. Back in 1989, a decade before its introduction, Sir Alan Walters, adviser to Margaret Thatcher, called the project “half-baked”. That fundamental shortcoming has not been corrected, but in the circumstances the euro has come a long way by means of fudge and dogged political will. The fudge can continue but, unless the weakness is finally addressed by lawmakers, the euro will ultimately fail.

That is the message of Malcolm Sawyer’s admirably clear analysis of the botched design of the euro and what would be needed to keep the project alive. Its biggest problem is that the 19 euro countries do not form an “optimal” currency area because their economies are so different – “pessimal” would be a more appropriate term. That divergence was clearly exposed after the 2008 financial crisis, when Greece, Ireland and Portugal were tipped into existential turmoil, and Germany, perversely, enjoyed an export boom. Surely in a properly functioning euro zone the stronger countries would have helped out the weaker. But no, the economic orthodoxy of the day, favouring austerity and neo-liberalism, was exactly the wrong recipe for a weak, heavily indebted country with high unemployment, such as Greece. The orthodoxy actually intensified as Germany set itself higher borrowing limits, despite its balance-of-payments surplus. Greece’s economy to all intents and purposes failed, twice.

That is not a proud record for a common currency. And so far there is little sign that it is changing its framework enough to deal with such an imbalance. Professor Sawyer lays out clearly what would need to be done, but he offers little hope that his recipe will be followed. The changes would have to be ideological, political and institutional. First, the bias towards austerity and neo-liberal policies needs to be softened. The emphasis should be on creating jobs and investing in growth in the poorer euro countries even if that means running a higher deficit on their current account. Second, there is a need for sufficient political will to make transfers to poorer euro members through measures such as mutual employment insurance and harmonised taxation. Third, there should be a change in the purpose of some euro-zone institutions, with a bigger budget for targeted investment, and a wider role for the European Central Bank (ECB) as a lender of last resort and provider of economic stimulus. Work on a European banking union, enforcing common standards and mutual deposit insurance across countries, is a step in the right direction. Changing the role of the ECB, however, would require a change in two EU treaties. Don’t hold your breath.

Maybe Professor Sawyer is being too pessimistic. After all, the euro has survived an extended crisis since 2010. Germany may have been playing Mr Nasty, but its politicians have nevertheless tolerated the expansionist role played by the ECB. The ECB president’s announcement in July 2012 that he would do “whatever it takes” to keep the euro alive – mainly by standing ready to buy the bonds of higher-risk euro-zone governments – was a game-changer. Since then there has been a reasonable assurance for investors that, almost whatever happens, the euro project will not be allowed to die. While President Macron rules in France and Chancellor Merkel rules in Germany that is unlikely to change. (Though Ms Merkel’s position is not as strong as it used to be: in a few months she may be replaced by someone less flexible on the euro.)

To put the weasel words of Mr Draghi on a sounder footing there would need to be some formal mutualisation of euro-zone government debt. That is a step Germany has always resisted. Professor Sawyer concludes that the euro zone “may well be able to stagger on for many years to come”. But he warns that a currency union needs to be underpinned, first by a form of federal fiscal union and ultimately by “a degree of political union”.

This short book is a timely reminder of how vulnerable the euro project is, and how political it is. It is a little light on the politics, and only hints at what might be the strongest underlying motive for introducing and maintaining the euro: to reduce the dominance of a united Germany.

It also skirts around the subject of quantitative easing (QE – the large-scale purchase of assets with central bank money as practised over the past few years in the US, Britain and the euro zone). It does not examine what effect QE might be having on keeping the euro area’s financial system alive, and what is likely to happen when QE comes to an end. Perhaps that is a subject for another euro-zone study.

An index would be helpful, as would a short biography of Malcolm Sawyer, who is Emeritus Professor of Economics at the University of Leeds.

Can the Euro be saved? By Malcolm Sawyer

Joe Earle, Cahal Moran and Zach Ward-Perkins – The Econocracy: On the perils of leaving economics to the experts

Book review by Mathew D. Rose I remember as a student at the history department of the University of California at Berkeley in the 1970s the first time a member of the teaching staff appeared […]

Book review by Mathew D. Rose According to Bill Mitchell the book’s original title was “Reclaiming the Nation State”. The progressive publisher wanted the word nation removed. The term “Nation State”, claimed the publisher, was […]

Book Review by Mathew D. Rose Heikki Patomäki is Professor of World Politics at the University of Helsinki, an academic with passions which, despite the scholastic format (and price) of his newest book,Disintegrative Tendencies in […]