Much is changing in Europe – seemingly. The question is, are changes such as the struggles in Catalonia and Scotland for self-determination going to end in true political, economic, and social change, or simply in folklore and flags, while the national bourgeoisie replaces the Spanish and English bourgeoisie as the new ruling class? 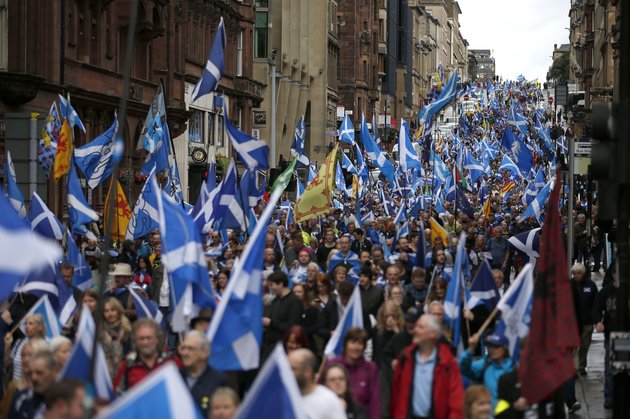 The European elections were bad news for Labour in England, but in Scotland they were a disaster, while in Wales the Labour party was overtaken by Plaid Cymru for the first time. The leader of Scottish Labour, Richard Leonard described the result as “incredibly bad.

The scale of what occurred in Scotland is incredible if you remember that prior to 2007, when the Scottish National Party formed a minority Scottish Government, Scotland was a Labour bulwark.

This time round Labour finished fifth after its share of the vote shrunk from 26 per cent in 2014 to just over nine per cent. It lost both seats it had previously held in the European Parliament.

In Scotland’s biggest city, Glasgow, it was joked they used to weigh Labour votes rather than count them. On Sunday night the result was that the SNP took 43.9% of the vote with Labour second but well behind on 15.1 percent.

The East Coast city of Dundee has a proud working class tradition. The SNP took 46% of the vote while Labour came third with 11.4% – down from 26.8% in the last European elections in 2014

In Fife, containing the old coalfield which in 1945 elected a Communist MP, the SNP polled 39,446 votes, 37.6 per cent of the vote, as Labour collapsed to fourth place behind the Brexit Party and the Lib Dems. Labour’s vote fell by 20 percent to 9.7 percent.

Those figures were mirrored across the old Central Belt, home once to mining, steel and engineering.

The capital, Edinburgh, has a larger middle class, but the SNP came top there with 33.4 percent while Labour came sixth with its vote falling by 16 percent to just 7.1 percent of the poll.

What is behind the collapse of Scottish Labour?

This collapse has been a long time coming. It dates back to the election of a New Labour under Tony Blair in 1997. In that election Labour (it had not billed itself Scottish Labour then) took 56 of the 72 Scottish seats at Westminster polling 45.6 percent, double that of the SNP. Scots were prominent on the front bench at Westminster with Gordon Brown Chancellor of the Exchequer and Robin Cook Foreign Minister. Labour in Scotland seemed secure in poll position.

But as elsewhere New Labour’s enthusiasm for neo-liberalism and the City of London, its supine support for the US invasion of Iraq and its ditching of any of Old Labour’s social democratic rhetoric alienated growing numbers of traditional supporters. The 2008 financial crash set the seal on that.

But unlike Labour supporters in England there was an escape mechanism at hand. Against his better judgement Blair agreed to the creation of an autonomous Scottish Parliament. Blair was assured the voting system chosen would never allow the SNP to win.

But once created after a strong referendum vote in favour it was easy for former Labour supporters to begin to shift from supporting devolution to supporting independence in their disgust with Blair.

The decisive moment was the 2014 Scottish independence referendum. The vote in favour of independence was far greater than expected and strongest in working class areas and among the young.

The London based leadership of the Labour Party decided not just to campaign against independence but to join with the Conservatives and others in a joint campaign, Better Together. By this time there was a Conservative-Liberal coalition Government at Westminster which retained control of the Scottish Government’s purse strings, foreign policy and much more and was enforcing austerity.

Better Together was a disaster for Scottish Labour. It was tied into a negative campaign which worsened as support for independence grew. Labour politicians like Gordon Brown fronted this and it left a bitter taste. People felt lied too. For instance, they were told they had to reject independence if they wanted to stay in the EU, only to discover they would be forced out following a Brexit referendum where Scotland, together with Northern Ireland voted to Remain, a decision ignored by a Conservative Government.

Pensioners were told they would lose their UK state pension, which was a big lie, but an effective one.

Much of the vote for independence, especially on the working class housing estates and among the young, was towards the close of the referendum the pro-independence campaign took on a more radical edge; not just opposing austerity but seriously addressing rebuilding an industrial base, promoting welfare, environmental agendas and so on.

In 2015 a Westminster general election saw the SNP take all but three of Scotland’s 65 seats at Westminster. This was devastating for Scottish Labour. The Party was focused on London and its brightest things looked to being elected there not to the Scottish Parliament.

That election was followed by a crucial change – the election of Jeremy Corbyn as Labour Party leader. His radical message would surely grab the support of so many who had deserted the party in Scotland.

But Scottish Labour was dominated by supporters of the King over the Water, Tony Blair, and completely unionist. During the 2017 snap Westminster election its material scarcely mentioned Corbyn or his manifesto, instead it concentrated fire on the SNP and a possible second independence referendum.

In an election which confounded expectations when Corbyn did far better than expected in England the result was that in Scotland the unionist vote rallied to its traditional champion, the Conservatives. The SNP’s share of seats fell top 35, the Tories won 13 and Labour just seven. On the ground it did benefit from the Corbyn “effect” down South, but it wasn’t enough.

Corbyn’s radical message might chime with people but the Unionist message did not.

In 2017 there was a change of leader as a left winger, Richard Leonard, took charge of Scottish Labour, billed as an ally of Corbyn. But he was a long time trade union official who continued to champion the Union and was leaden in his overall approach. He certainly did not set the heather alight.

Labour’s problems deepened. It steadily lost council seats, eventually losing its Glasgow bastion. Its membership was in decline and the huge influx that followed Corbyn’s election in England was not replicated in Scotland (in Glasgow a right wing party machine had never trusted members and kept membership deliberately low).

But the central problem was those wanting a radical change supported independence as the best means to achieve that.

The success of the SNP must be put in the context of it adopting Old Labour rhetoric during the New Labour years and subsequently benefitting from the suicide of the radical left, which had at one time five seats in the Scottish Parliament. It is under little pressure from either the left or the right.

Some might see it as receiving the votes of those who wanted to Remain in the EU but did not support independence but if you were that way inclined you could opt for the Liberal Democrats, as many did; plus, a significant minority of SNP supporters voted for Brexit. Their desire for independence took priority.

The hollowing out of social democracy is a European wide phenomenon. But the collapse in Scotland this time round is truly remarkable. It is hard to see Scottish Labour making a significant come back. Support for independence is rising, slowly but surely.

That flows not just from a subjective mood but from an objective one; the decline of the UK and the way that impacts on the British state. At this moment the Westminster system lies broken. Escape in the form of independence looks ever more attractive.

Branko Milanović – On the role of economics and global inequality

How economics help us to understand political and social movements Branko Milanović is an economist specialised in development and inequality. His newest  book is “Capitalism, Alone: The Future of the System That Rules the World” […]