Much of the EU political elite has great difficulties with human rights. First of all, they are not included in the Four Freedoms of the EU. Second, neo-classical economists are having incredible difficulty figuring out what is the monetary value of human rights if they were commoditised. This binds the hands of these EU polticians because they do not know what human rights are worth. In that case, there is very little they can do – which explains why they do nothing. 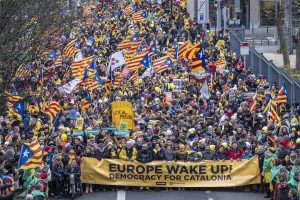 A year ago we witnessed the worst attack I can recall on democratic rights in any Western European democracy since civil rights marchers were smashed off the streets of Northern Ireland in 1968. I am referring to the attempts by the Spanish state to stop the people of Catalonia voting in an independence referendum by using paramilitary police to smash their way into polling stations, seizing ballot boxes and attacking those waiting to vote.

Yet since then further attacks on democratic and human rights by the Spanish state have continued, and have been met with silence by the European Union. Many in Catalonia point out that if this was not happening in a key member state the European Commission would have imposed sanctions as it has down elsewhere in response to similar attacks.

In late September I accompanied three Members of the British Parliament, Ronnie Cowan, Douglas Chapman and Gavin Newlands, all three representing the Scottish National Party, on a delegation to Catalonia. There we might representatives of all the major parties represented in the Catalan Parliament, including the Catalan Socialist Party opposed to independence. Ciudanos, the main unionist party, did not respond to our request for a meeting. We also met a number of civic and social organisations, members of the Latino community in Barcelona and visited Baynoles, which voted 97 percent for independence last October. That visit included a meeting in the mosque with members of the town’s Gambian and Senegalese community, one which is very much part of the fabric of local life.

We also met with relatives of the political prisoners being held on charges of rebellion and sedition brought by the Spanish state following the independence referendum held last October, after a vote to do so in the Catalan Parliament. This was declared illegal by the Spanish courts and the then government of Mariona Rajoy bussed in 6000 paramilitary police into Catalonia to try and stop voting.

Ronnie Cowan MP visited three of the nine prisoners being held in preventative detention in Lledoners, which he reported on in the Scottish media.

One of those Ronnie saw was Jordi Cuixart, president of Europe’s largest cultural organisation, Òmnium Cultural. He is charged with rebellion and sedition, charges which were removed as offences in most EU countries, but in Spain carry a 30 year sentence.

The charges relate to an incident last September in the build up to the Catalan independence referendum, when Guardia Civil raided the Catalan Ministry of Economics. A crowd eventually numbering 40,000 gathered blocking the Guardia from leaving.

The Jordi Cuixart and Jordi Sánchez, President of the grass roots Catalan National Assembly addressed them appealing for calm and reminding everyone the independence movement was, and is, committed to non-violence, and later asked the crowds to disperse. This was all caught on camera and is available for anyone to view.

For this they have lain in jail for a year. Jordi Cuixart was transferred, along with the other eight prisoners to Catalan jails by the new Socialist government in Madrid. Before that his partner, Txell Bonet, who we also met, had to travel over a thousand miles to a Madrid prison with their infant son.  The visits were 40 minutes long and conversation was through a plastic screen.  Cuixart did get two direct visits a month when he could embrace his son.

That a speaker of a European Parliament faces jail for simply permitting a debate is simply incredible.

Two hundred and fifty six Catalan civil servants have been sacked; a thousand local government councillors and mayors await prosecution for things like flying the Catalan flag on town halls on Spanish national holidays. Teachers have been charged with indoctrinating school students and encouraging hatred of the Spanish police after they allowed a discussion of the events on referendum day 24 hours later. Many schools were polling stations and had been occupied by school students, parents and staff to ensure they opened that Sunday morning

Other cases in Spain underline the limits Spanish laws impose on human rights. The Majorcan rapper, Valtonyc, fled to Belgium, where the courts refused an extradition warrant based on charges that he “glorified” terrorism. The lyrics in question included “let them be as frightened as a police officer in the Basque country” and “the king has a rendezvous at the village square, with a noose around his neck”. You might not like the sentiments but if such charges existed elsewhere few rappers would be walking free!

He was charged in Spain under Article 578 of the Spanish penal code, popularly known as the “gag law.” Amnesty International reports that 84 people have been convicted under it in the last three years.  In 2017, 39 people were brought before the courts charged with praising terrorism on social networks.

Spain’s new Socialist government has said it will revise the “gag law”.

His offence was to post on Facebook “Me cago en dios,” in English “I shit on God.” It is a common Spanish expression.

“In this country, everybody shits on God at some point in the day, but I have been persecuted and judged for it for the last nine months,” he told a radio station.

“I will continue shitting on God while they continue raping babies and children,” he added, referring to the ongoing scandal of sexual abuse and rape cases in the Catholic Church.

The new government of Pedro Sanchez has expressed some regret over the prosecutions in Catalonia but argues it cannot intervene in the judicial process because it is independent. Yet that simply ignores that a number of senior judges are appointed by the Madrid government, and that means most owe their position to the centre right Popular Party, in office until recently. The prosecutions were brought by the Attorney General and could be dropped by that minister.

What is clear from our visit to Catalonia is that many of those who would not support independence are opposed to the jailing of those like Jordi Cuixart and Carme Forcadell and the prosecution of mayors, teachers and peaceful protesters. The actions of the Spanish state are leading many of those to question their previous position on independence.

Spain’s head of state is King Felipe V1, Bourbon. Back in the 19th century the great Liberal prime minister of Britain, William Ewart Gladstone, published a pamphlet denouncing the repression used by one of Felipe’s ancestors, the Bourbon ruler of the Kingdom of Naples. It included these words:

“It is not mere imperfection, not corruption in low quarters, not occasional severity, that I am about to describe: it is incessant, systematic, deliberate violation of the law, by the power appointed to watch over and maintain it. It is such violation of human and written law as this, carried on for the purpose of violating every other law unwritten and eternal, human and divine.”

Why are we not hearing such words from European political leaders in denunciation of what is being done in Catalonia and elsewhere in Spain?

Dani Rodrik – Many Forms of Populism

There are essentially two schools of thought on the roots of populism, one that focuses on culture and another that focuses on economics. This column, part of a VoxEU debate, examines the drivers from each […]

Michael Roberts – Resetting the Economy – for Social Need not Profit

Progress for equality and the environment is only possible with public ownership of the major financial institutions and multi-nationals so that the world can be planned through democratic organisations for social objectives, not for profit […]