Quantitative easing – not to save bankers and property barons – but for the insecure majority of people, creating jobs, raising incomes, and making their lives more bearable, should be part of a pan-European Green New Deal

Colin Hines is convenor of the Green New Deal Group and former co-ordinator of Greenpeace International’s economics unit, having worked for the organisation for ten years 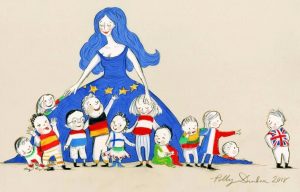 The setback to the immediate plans of those seeking the UK’s exit from the European Union provides a window of opportunity to go on the offensive for an anti-populist, continent-wide alternative.

The UK now has around six months to sort out the Brexit debacle. Yet out of this could emerge a Europe-wide programme to turn the youth-led Extinction Rebellion into a successful movement and reverse the recent boost given to anti-environmentalist populists by the electoral success of the True Finns party.

To achieve this will require support for a programme to tackle the majority’s growing sense of social and economic insecurity and at the same time help to solve climate chaos. A start could be made during the European Parliament elections—with UK involvement now made virtually inevitable by the extension of its stay within the European Union, potentially to the end of October.

Central to this campaign must be the demand for a Europe-wide Social and Green New Deal. The former would reject austerity and instead dramatically increase the funding of employment in face-to-face jobs which address the worries of people of all ages, such as inadequate health, education and housing through to care for the elderly. A European Green New Deal would result in a massive green infrastructure programme, ensuring the rapid decarbonisation of energy, transport, resource use and agriculture. The political advantage of this twin approach is that it would be seen by voters across Europe to be beneficial to every community.

Also key is the need for regulations to ensure that all these social and infrastructural jobs are adequately remunerated and secure. Their additional advantage is in offering a career structure across a wide range of skills for many decades. Such work is also relatively difficult to automate and virtually impossible to relocate abroad.

Such an approach is made more feasible by three trends. First, there is increased public resistance to the ever-clearer downsides of austerity and privatisation. Demands for change are now climbing up the political agenda, as people of all classes are worried about social issues—even the affluent are concerned about how these affect their children and grandchildren.

Just as this is happening, so worries about climate change are also moving centre-stage. The United Nations’ top scientists have warned that we have just 11 years to halve global emissions and avoid climate catastrophe. This has resulted in 1.4 million young people joining the global school-strikes movement to demand change. A series of climate-related events—from massive fires in the United States through to the recent devastating floods in Mozambique—have fuelled a growing activist movement calling for transformational policies to tackle climate change, but in a way that benefits the majority.

Finally, in an echo of the 2008 crash, there is now a growing conviction that another serious global downturn is imminent and debates have begun about how to stop it occurring or to cope with its aftermath.

Of course, the key question always asked about such a massive programme is how to pay for it. The answer is from the usual fiscal sources, such as increased government expenditure and fairer taxes, as well as encouraging savings in what might be called ‘climate war bonds’. In the event of a looming economic crisis, however, a massive green ‘quantitative easing’ programme of monetary expansion will have to be considered. The previous crash resulted in $10 trillion of QE being injected into the global economy, but it wasn’t directed at job-generating investments and mostly inflated the stock and property values of the already comfortably off. Given the economic problems facing the eurozone, even the Financial Times has called for a large-scale green QE programme.

The crucial link between a Social and a Green New Deal is how the funding required, and what it is spent on, can ensure that the basic lot of the poorer section of society is improved, and that compensation can be provided for any green-transition policies resulting, for example, in rising food or energy prices. This can take the form of increased benefits and, for instance, scrappage schemes to replace older, more-polluting cars and subsidies for electric vehicles. Such an approach would address this understandable jibefrom a French yellow-vests protester: ‘Our elites are talking about the end of world when we are talking about the end of the month.’

Finally, this approach could act as an encouragement for those communities campaigning globally for such changes. The Guardian’s economics editor recently listedthe short-term blocks to achieving a ‘global green new deal’, but improving the day-to-day existence of the majority, while tackling the environmental crisis, could turn the clichéd call to protect the people and the planet into reality. There really is no other choice.

Coming to grips with the value of the dollar and US debt and its consequences for the world economy. Frances Coppola  is the author of the Coppola Comment finance and economics blog, a contributor to […]

The Conservative Party used to look after big, nationwide businesses. Now it serves a finance industry based in a few small areas of the capital. What is unfortunately not mentioned is that this system is […]

For those of you who are not familiar with the term Kangaroo Court, it means: An unofficial court held by a group of people in order to try someone regarded, especially without good evidence, as […]