Neo-liberalism’s greatest fear is of the nation state that can defend the rights of its citizens and protect its environment against corporate interests. This is why the EU was created – to destroy democracy embodied in nations states. 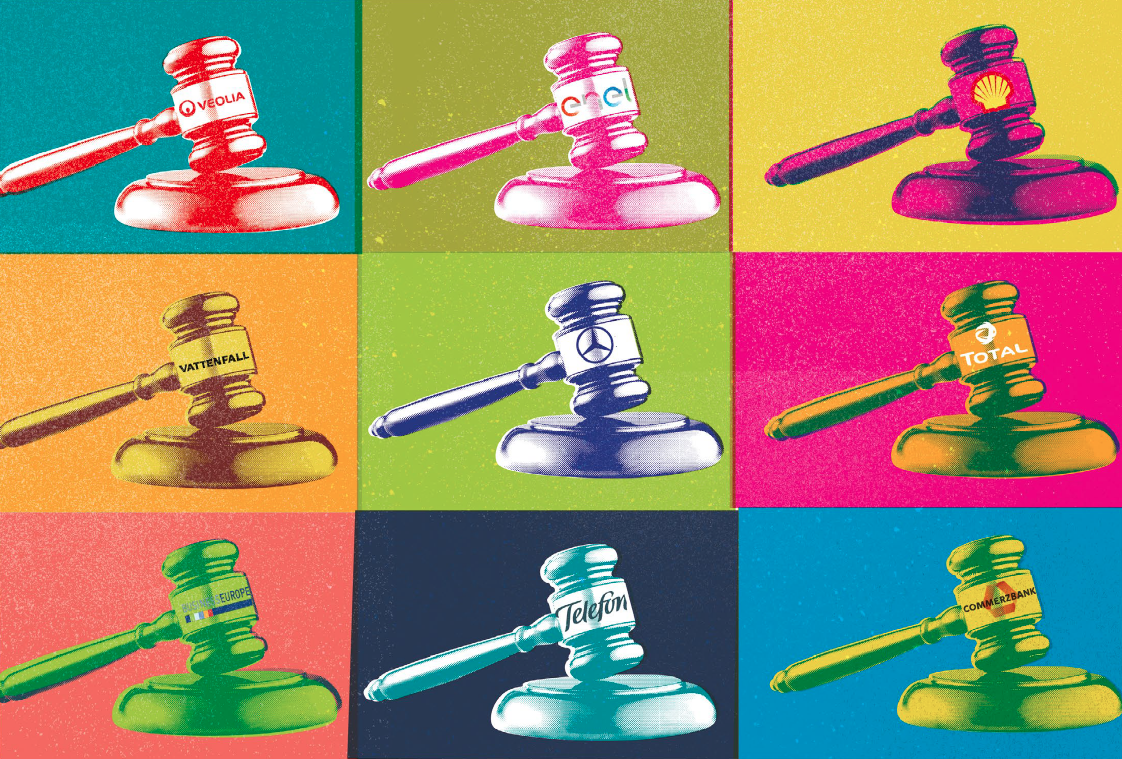 The European Commission is currently preparing a proposal to protect cross-border investments in the EU, to be published in autumn 2021. There are worrying signs that the new proposal could include vast new legal privileges for corporations – exactly what large banks, law firms and big business lobby groups have been pushing for. As a result, a new EU court exclusively for corporations could make European governments pay huge sums of money to big business as compensation for regulations brought in to protect workers, consumers, and the environment. The serious financial risk such a court would create, of having to pay significant damages, could ultimately put governments off regulating in the public interest.

The ongoing corporate lobby campaign for new legal privileges commenced after a landmark ruling by the Court of Justice of the EU (CJEU) in March 2018. The court put an end to dozens of bilateral investment treaties (BITs) that EU member states had signed with each other. These treaties allowed investors to bypass national courts when state decisions hampered their investments and instead sue member states before tribunals adjudicated by three private lawyers. The CJEU held that this kind of dispute settlement (known as investor-state dispute settlement or ISDS) was illegal, as it side-lined EU courts. As a result, approximately 130 intra-EU BITs are now being terminated.

The court’s ruling sent shock waves through the business and legal community, given the risk it posed to the sizeable profits they had been making out of ISDS processes. Business lobby groups mobilised quickly and started lobbying the European Commission to create a new parallel justice system, similar to the old intra-EUBITs, but compatible with EU law. Corporate Europe Observatory’s new report uncovers their hidden lobby campaign.

1) In 2019 and 2020 corporate lobbyists held at least a dozen meetings with the responsible European Commission department, DG FISMA (Directorate General for Financial Stability, Financial Services and Capital Markets Union), according to internal documents released via the EU’s freedom of information rules. Big business also flooded Commission inboxes with letters and position papers calling for a new corporate court. At high-profile events corporate executives repeated the message that there was now not enough legal protection for business in the EU.

3 )The message from big business and its lobbyists was always the same: the termination of the intra-EU BITs “would leave investors without appropriate legal protection” in the EU internal market (as German business lobby groups wrote in a June 2019 letter to the Commission). This was followed up with a threat. “This lack of protection may induce EU companies to invest outside the EU”, with the effect of “reduced capital inflows into the EU and tax income” (European Banking Federation position paper from July 2019). It was thus imperative that the Commission urgently create a new legal framework to protect EU corporations.

4) Industry’s alarmist claim that the end of intra-EU BITs will leave investors without appropriate legal protection is little but crying wolf. In the EU internal market, investors can rely on a long list of rights and protections, including the right to property, non-discrimination, to be heard before an authority and to an effective remedy and a fair trial. Also, the EU Justice Scoreboard – the key data tool used to monitor the quality of EU justice systems – shows no evidence of systematic abuse of foreign investors in EU member states. This lack of evidence means it would be very difficult to justify special legal protections for corporations (as opposed to, for example, journalists or human rights defenders).

5) Big business’ key demand is a new system for settling intra-EU investor-state disputes that enables industry to avoid EU member states’ national courts. Various options are being proposed, including a new EU investment court that would only be accessible to corporations. Making clear their reliance on financial pressure tactics to scare governments into submission, corporations argue that only “the risk of judicial proceedings is an incentive for state parties to… engage in dialogue with investors” (German industry lobby groups in a letter to the Commission, June 2019).

6) Industry wants to change EU law so that it mirrors the substantive investor protections and wildly speculative damage calculation methods which are common in international investment law. Provisions such as fair and equitable treatment should be “codified, specified and further developed” in new EU legislation, according to Commerzbank and Deutsches Akieninstitut. This would risk driving up costs for public interest regulations in the EU, making it easier for business to secure large amounts of compensation paid out by the public purse.

7) A European Commission non-paper from September 2020 outlines worrying options for both the substantive investor rights and the new system for settling intra-EU investor-state disputes, including the creation of a specialised investment court at EU level. The Commission also seems keen to establish new privileges for business to intervene even more and even earlier in policy processes.

8) The introduction of new investment law standards and an EU-wide system to enforce them could ultimately discourage and prevent governments from regulating in the public interest when their proposals are opposed by powerful economic actors. And this is exactly what big business wants. As EuroChambres, the Association of European Chambers of Commerce, made clear: “Companies are not against measures that protect common interests that matter to society at large, however they cannot be detrimental to businesses’ investments.”

9) Trade unions, consumer and environmental organisations vehemently oppose new special rights for foreign investors. They argue that any rule of law deficits in the EU should be addressed in a way that improves the experience of all citizens, rather than by creating additional legal privileges for a small number of already highly powerful and protected economic actors. They have also criticised the contrast between the Commission’s approach to civil society concerns and those of corporations. As the Austrian Chamber of Labour remarked: “While the Commission has long ignored workers’ requests to create minimum social standards for the EU… complaints about the lack of protection for investors, on the other hand, have immediately prompted the Commission to run a consultation on the issue.”Despite being defeated previously, it appears that the ISDS investor super rights are once again coming back with a vengeance. If the corporate lobby campaign succeeds, a new EU-wide system of corporate privileges could boost big business’ long-running strategy of undermining democracy and favouring corporate profits, at substantial cost to the public. But if this proposal is defeated, it could spell the end of companies using their own parallel justice system to sue governments for having the audacity to legislate in public interest.

As this article explains, there will be no clean substitute for most flights in the foreseeable future. Eviation’s Alice prototype. Ian Langsdon/EPA Duncan Walker, Loughborough University The UK government plans to ban the sale of […]

Richard D. Wolff – Explaining 21st-Century Capitalism in a Way Everyone Can Understand

For those of you trying to understand economics and what capitalism is about, here is an excellent introduction. Richard D. Wolff is professor of economics emeritus at the University of Massachusetts, Amherst, and a visiting […]

Today’s news that the German economy, the powerhouse of Europe, had narrowly avoided a ‘technical recession’ in the second half of 2018 is another red light flashing for the world economy.  Michael Roberts – Economist […]