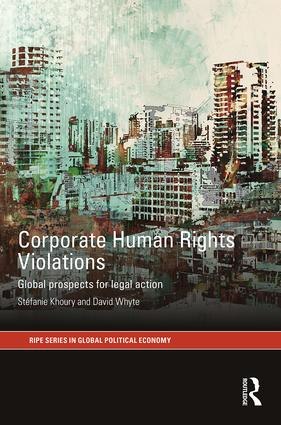 The term “human rights” has a positive connotation: inalienable rights for everyone, regardless of location, religion, ethnicity or any other qualities. There is one clear anomaly in this system: the human rights of corporations. Although not human, free of any human qualities, existing solely as a legal entity, they often enjoy dominance in international human rights cases, including impunity when they violate the human rights of living individuals and peoples. This is one of the great injustices of this world.

The goal of Stéfanie Khoury and David Whyte’s book “Corporate Human Rights Violations” is to explain the legal construct which has legitimised the capitalist logic of human rights. They follow the development of international law that, as they explain, “has thus far been incapable of adequately addressing the corporate violations of human rights.” These laws instead provide protection for corporations, especially transnational corporations, giving them unassailable immunity for human rights violations. This is nothing less than an extension of the neo-liberalism dogma that states should not interfere in markets.

The source of this miscarriage of justice, according to the authors, was to invite corporations as stakeholders, as the UN did, to participate in defining their human rights obligations and liabilities. Instead of addressing the conflict that existed, the UN sought a consensus, which of course ended, as it always does in neo-liberalism, with de facto self-regulation, “formalising and legitimising a capitalist logic of human rights”. Nor has the situation within the OECD or international courts of law been much more successful in protecting the human rights of citizens, especially in developing nations vis-à-vis corporations.

This policy has been driven by the wealthy nations, while developing nations have not been able to muster the clout. This may be for economic reasons or simply the corrupt deals they seek with trans-national corporations at the cost of the basic rights of their own citizens, failing to confront this issue, at home and in international fora. The result is that there is hardly any accountability for human rights violations by trans-nationals, as these rules apply only for those corporations that sign up to the agreement, not to mention that no arrangements were made for monitoring and enforcing the agreement. In fact, just the opposite has become the case: it is trans-national corporations which have been able to use human rights protection in their own interests.

The authors describe in detail the historical, political, and legal developments that have led to the current lack of protection of citizens from the human rights violations of corporations and often hinder them from obtaining compensation. In the neo-liberal period these structures, according to the authors, have “been deepened considerably”.

Hopes the authors might have entertained that there would be positive steps towards rectifying the situation were disappointed by the first draft (“Draft Zero”) of a new treaty on the human rights responsibilities of corporations tabled by the UN Human Rights Council (HRC) in September, because of the usual key shortcomings and omissions.

The publisher praises the book as “essential reading for all those interested in how international institutions and NGOs are both shaping and being shaped by global struggles against corporate power.” This is a work accessible mainly to experts or those wishing to become one. I spent almost as much time researching events and the court cases named in the book, but without any real background information, as I did reading the book. Whereas Whyte´s previous book, The Violence of Austerity, despite also being in an academic format, was a powerful voice against austerity, this book will, despite the important issues it addresses, have difficulty finding a wider audience.

As the lies of corporations and the European political class regarding climate change become ever more massive, so will the reaction of concerned citizens, especially European youth. Mathew D. Rose is an Investigative Journalist specialised […]