This is not about pro- or contra Putin (did anyone support Saddam Hussein?), but being led by lies into still another superfluous war like Afghanistan, Iraq, Libya, etc.

In the massive propaganda blitz over Ukraine, there is one place where you can find, in enormous detail, the truth about what is happening in the civil war conflict zone on a daily basis. That is in the daily reports of the Organisation for Security and Cooperation in Europe (OSCE) Monitoring Mission.

The Organisation for Security and Cooperation in Europe is a brilliant organisation set up to monitor implementation of agreements on human rights and arms control during the Cold War period. It includes Russia, the UK and the USA among its 57 members as well as all EU states. It has been operating in conflict zones for over half a century. 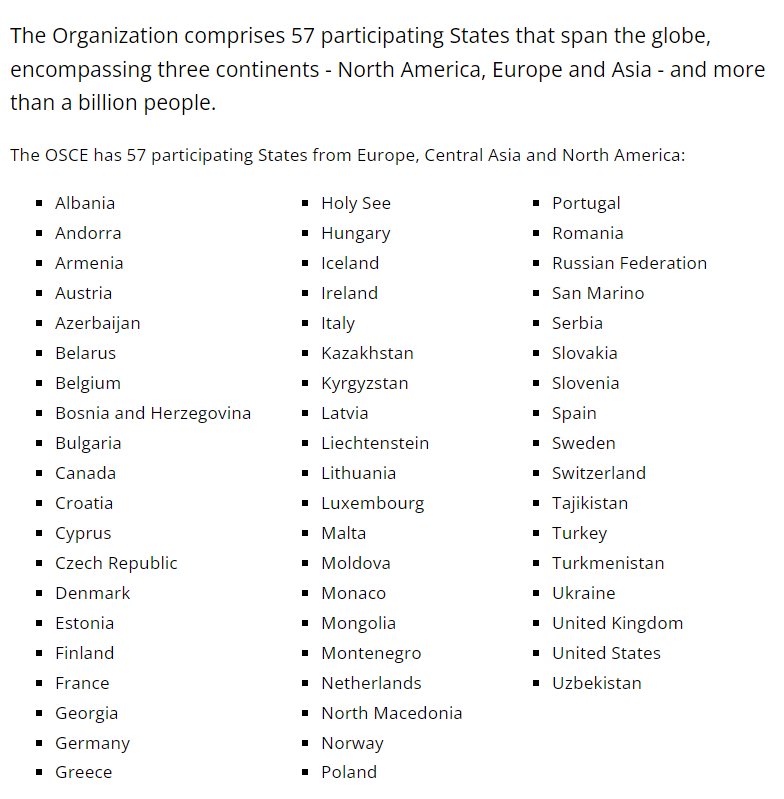 Over 40 member states have monitors in the Ukraine monitoring mission. The head of the mission is Turkish, and almost all members have a military or diplomatic background. There are 700 monitors, and they have been in Ukraine since 2014. Their job is to patrol both sides of the civil war conflict zone and to record infringements of the ceasefire and de-escalation agreements, bringing these to the attention of the relevant authorities.

Their work is very comprehensive indeed, and their detailed daily reports are public. These provide the most fantastic journalistic resource for what is actually happening on the ground – which is why Western mainstream media never use this resource, because the truth is the opposite of the picture they wish to paint.

For example, three OSCE monitors attended the site of the famous “kindergarten missile” attack, to verify what kind of missile was used, where it came from, and then tally this against the OSCE’s detailed record of weapons on both sides in the area and their daily movements. This is, literally, the basic everyday job of the mission. The team of OSCE expert observers – two of whom were from European Union countries – were denied access by the Ukrainian government to the kindergarten when they arrived to determine what kind of missile it was and where it came from. This is in direct violation of the ceasefire accord.

For those of us who saw the kindergarten attack stunt as propaganda to begin with, this is powerful corroboration.

This is from the OSCE’s daily report of 18 February:

Damage to a working kindergarten in Stanytsia Luhanska, Luhansk region
On 17 February, the Mission followed up on reports of damage to a working kindergarten in
the north-western part of Stanytsia Luhanska (government-controlled, 16km north-east of
Luhansk), located about 4.5km north-west of the north-western edge of the disengagement area
near Stanytsia Luhanska.
At 22 Depovska Street, about 20m south-west of a two-storey kindergarten building, the SMM
observed a crater in the kindergarten playground, as well as marks assessed as caused by
shrapnel on the inner side of a concrete wall surrounding the building. Also, it observed a hole
(about 1m in diameter), and one shattered window on the north-eastern facade of the same
building, and two shattered windows on the building’s north-west facing wall (on its ground
and first floor).
The SMM assessed the damage as recent but was unable to determine the weapon used or the
direction of fire.
Staff from the Youth Affairs Department of the Stanytsia Luhanska Civil-Military
Administration told the Mission that 20 children had been in the kindergarten at the time of the
incident, but reported no injuries.
The SMM was only able to conduct its assessment from a distance of about 50m from the
north-eastern facade and of about 30m from the south-western facade of the damaged building,
as a law enforcement officer did not allow the Mission to access the site saying that an
investigation was ongoing.

That same report records numerous violations of the ceasefire agreement by the Ukrainian government in moving heavy weaponry in to menace separatist held areas and in keeping weaponry outside agreed storage facilities. It equally reports precisely the same kind of violations by separatist rebels. None of which balance has been recorded by the same western media which loves to give detailed accounts of troop movements within Russia. Here is just one tiny example of hundreds of the OSCE information, from the same report of 18 February as the kindergarten visit:

Three countries have now withdrawn their staff from the OSCE Monitoring Mission in preparation for a coming war – the UK, the USA and Canada. In my view, that speaks volumes about who is actually planning on starting a war here. Extraordinarily, having withdrawn their staff, the western powers are now briefing the media that the OSCE (which has for decades been a key tool of western security architecture) is a biased organisation.

Yet again the parallel to the Iraq War is striking to those of us who recall the rubbishing by the US/UK of the reports of the UN weapons inspection team, in favour of propaganda and outright lies in order to start a war.

Craig’s ability to provide this coverage is entirely dependent on your kind voluntary subscriptions which keep his blog going. This post is free for anybody to reproduce or republish, including in translation. You are still very welcome to read without subscribing.

Subscriptions to keep his blog going are gratefully received.

Gorillas rated 2/10 and Amazon Flex 3/10, while Lieferando and Wolt receive 7/10 The Gig Economy Project, led by Ben Wray, was initiated by BRAVE NEW EUROPE enabling us to provide analysis, updates, ideas, and […]

Emmanuel Macron is showing Europe what Militarised Liberal Democracy can do (The German government is decades ahead). Not only is the movement for social justice being criminalised, but also groups fighting climate change. Natalie Sauer […]