Out of $3.4 billion spent by trade associations over 10 years, nearly $2.2 billion went towards advertising and promotion, with the oil and gas industry the biggest spender. 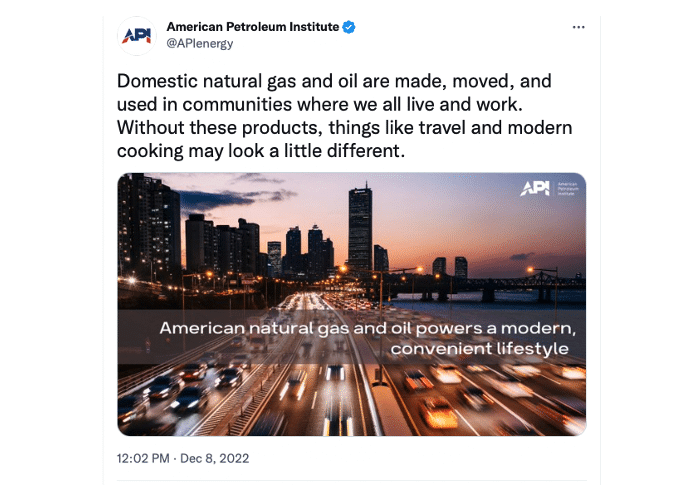 Industry trade associations in the United States that work on climate and energy issues spent more than $3 billion over 10 years on political activities, according to a new study that sheds light on trade associations’ role in influencing policies and obstructing climate action.

The new paper by scholars Robert Brulle of Brown University and Christian Downie of The Australian National University, published Monday in the journal Climatic Change, examined the political spending of nearly 90 U.S. trade associations from 2008 to 2018. The analysis, based on combing through trade associations’ IRS filings, found that these organizations spent $3.4 billion on climate-related political activities. It also found that what they spent the most money on wasn’t lobbying or campaign contributions — as had been previously assumed — it was advertising and promotion.

Out of the $3.4 billion in total political activity spending, almost $2.2 billion of it went towards advertising and public relations. Trade groups in the oil and gas sector were the largest spender in this category, pouring more than $1 billion into it. These findings are consistent with a previous analysis done by the Climate Investigations Center that found that major U.S. fossil fuel trade associations spent $1.4 billion on advertising and PR between 2008 and 2017. The American Petroleum Institute alone accounted for nearly half of that sum.

“Trade associations in the gas and oil sector engage in a high level of public relations spending,” Brulle and Downie wrote in their new study.

It is no secret that companies in carbon-intensive industries engage their trade associations to lobby and advertise on their behalf in order to stave off climate policies. Relying on these organizations to influence policy outcomes and public opinion is a documented tactic of polluting corporations, and yet, according to Brulle and Downie, scholarly research focusing specifically on trade associations in the context of climate change is sparse. Their study aims to fill this gap.

“This is a landmark study, looking at the role of fossil fuel corporate trade associations, which are a big part of the multi billion dollar influence peddling industry in Washington DC and across our country,” Kert Davies, director of the Climate Investigations Center, said via email.

“The climate policy war is among the biggest and most consequential fights of the past three decades” Davies added. “The corporations have largely had the upper hand and won the battles. Trade associations have been a big part of their power. This study shows the billions of dollars fossil fuel interests have spent to improve their image and standing in the policy arena.”

Trade associations are enormous political and cultural actors. New paper out that details the extent of their political activities. https://t.co/gNF28l9Wrk

According to one expert in climate disinformation and the PR industry, this research further shows how fossil fuel trade associations rely on PR and advertising firms to purchase public trust.

“By supporting trade association clients, some communications firms are playing an overtly political role — both manipulating public understanding of climate solutions and enabling climate policy obstruction on behalf of the oil and gas industry. As the study notes, this is one of the primary reasons that states are failing to limit greenhouse gas emissions. In my view, it’s also the PR and ad industry’s greatest contribution to the climate crisis itself,” Christine Arena, founder of the production company Generous Films and a former vice president at Edelman, told DeSmog.

The hefty spending by trade associations on advertising and promotion in comparison to other activities, like lobbying, was a significant finding of the study, according to one of its authors.

“Many would expect that lobbying would be the leading activity. However, this was not the case,” Downie explained via email. “Total spending on advertising and promotion totaled $2.2 billion, more than three times that spent on lobbying over the same period, which equaled $729 million.”

However, the results do offer insight into how much money trade associations are pouring into various activities, and given that the industries studied do engage on climate, the analysis offers a sense of how these organizations are influencing climate politics.

“Ultimately, our findings highlight the sum of trade associations’ political activity, and the important role they can play as opponents of climate action,” Brulle and Downie conclude.

And according to Arena, this kind of research is important to demonstrating the problem of corporate influence in climate policy and then taking steps to address it.

“The fossil fuel industry’s answer to increasing public scrutiny is to spend more money on influence and advertising, rather than shifting its business model,” she said. “The spending spree has worked to shield the fossil fuel industry from regulatory intervention and maintain its social license to operate. This is a difficult cycle to break, given the $2.2 billion that trade association clients are putting into their campaigns. Agencies are understandably reluctant to abandon such profitable contracts, which is why empirical evidence illustrating the problems and corresponding interventions from activists and lawmakers are needed in order to break the destructive cycle.”

Andrew Stirling – Is the naming of ‘climate change’ a dangerous self-defeat?

This is the first in a series of four blog posts on the climate by STEPS co-director Andy Stirling, under the heading: ‘Controlling a stable planetary climate – or caring for a complex changing Earth?’ […]

All the calls for letting the market and wonder technologies that do not function solve the climate crisis is nothing more than pissing in the wind. Michael Roberts is an Economist in the City of […]

Never has the need for a public information campaign been so great, not only to educate people about the climate emergency, but also to flag what they can do to mitigate its impact Bill McGuire is […]