Universities were once institutions of new ideas, a place where thoughts could run free. As we are seeing with university strikes in Britain and the US, they have become servile institutions for neo-liberal ideology and financialisation.

His thesis is that, since the early 80s, many industries have become dominated by a handful of superstar companies whose increased market power allows them to enjoy higher profit margins. The result is higher prices than would otherwise be the case which in turn means lower output, lower demand for labour and lower real interest rates. It’s not just workers who suffer from this but also smaller companies who face tougher competition from giant firms and higher costs from them too. We should read all this alongside Thomas Philippon’s The Great Reversal and Lindsey and Teles’ The Captured Economy, both of which also document how American capitalism has become less competitive and dynamic. 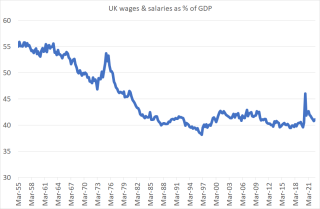 Whilst all this might be true of the US, I suspect it is much less so here in the UK. Of course, we have monopolies, but many of these are privatized rentiers rather than firms like Apple and Amazon that have won the competition for markets. The UK has very few superstar companies – and indeed not many that even reach the height of mediocrity. This much is evident in the fact that the share of GDP going to workers in the UK hasn’t changed much since the late 80s yes, real wages have stagnated here for 15 years but this owes more to flatlining productivity than to firms’ increased market power.

This, however, is not my beef with Eeckhout. Instead, my problem is that he gives us no historical context.

The idea that capitalism would see increased monopoly power is an old one. Marx wrote that:

The battle of competition is fought by cheapening of commodities. The cheapness of commodities demands, caeteris paribus, on the productiveness of labour, and this again on the scale of production. Therefore, the larger capitals beat the smaller. It will further be remembered that, with the development of the capitalist mode of production, there is an increase in the minimum amount of individual capital necessary to carry on a business under its normal conditions. The smaller capitals, therefore, crowd into spheres of production which Modern Industry has only sporadically or incompletely got hold of. Here competition rages in direct proportion to the number, and in inverse proportion to the magnitudes, of the antagonistic capitals. It always ends in the ruin of many small capitalists, whose capitals partly pass into the hands of their conquerors, partly vanish. Apart from this, with capitalist production an altogether new force comes into play — the credit system, which in its first stages furtively creeps in as the humble assistant of accumulation, drawing into the hands of individual or associated capitalists, by invisible threads, the money resources which lie scattered, over the surface of society, in larger or smaller amounts; but it soon becomes a new and terrible weapon in the battle of competition and is finally transformed into an enormous social mechanism for the centralisation of capitals.

And in 1966 Paul Baran and Paul Sweezy argued in Monopoly Capital (pdf) that American capitalism had become dominated by giant corporations with market power, with the result that the economy was stagnating. In essence, that’s similar to Eeckhout’s theory.

But Eeckhout mentions none of this.

Does this matter? I suspect so.

First, at least some of the monopolistic giants of Baran and Sweezy’s time subsequently ceased to be so: think of General Motors, US Steel or Eastman Kodak. This tells us that monopolies are not always as longlasting as they seem. Instead, technical change, competition from unlikely sources, diseconomies of scale or management hubris and over-reach can eventually slay them.

Of course, maybe this time is different. Perhaps companies such as Apple, Alphabet and Microsoft have better economic moats than did 1960s monopolies. But Eeckhout never poses this question – perhaps because that absence of history means it didn’t arise.

Eeckhout’s omission here is not, however, a personal failing but a symptom of academia. The history of economic thought is not taught as much as it once was. And pressure to publish and to sell books have led to an over-valorization of “original” contributions and thus a failure to locate one’s work in an intellectual tradition: the replicability crisis shows us that original work is often not good.

One effect of this is that economists sometimes need to reinvent the wheel. MMT, for example, is in essence the (welcome) rediscovery of functional finance. The result is not only a lack of intellectual progress as we fail to stand upon the shoulders of giants, but also an entrenchment of neoliberal individualism – the selling of research as individual output rather than collective tradition.

But there’s something else. Such neglect of intellectual history – and especially the Marxian tradition – leads to naive politics. Eeckhout calls for the establishment of a powerful “Federal Competition Authority” to restrict mergers and promote competition.

But this begs the question: how is such change to be achieved? To paraphrase Marx, this is merely writing a recipe for a cook-shop of the future. Yes, it’s valuable in showing that a better world is possible, but it leaves open the matter of how to achieve this world.

Again, this is not a personal failing of Eeckhout. His work reminds me of Case and Deaton’s Deaths of Despair. Both skilfully document how capitalism is failing the American people but then assert that the system can be redeemed by technocratic fixes whilst showing little curiosity about systemic change: Eeckhout says that “only pro-market capitalism can attain healthy competition” without even considering market socialism. Both are remarkably optimistic about the potential to reform capitalism whilst unable to conceive of more radical alternatives to the system.

In fairness, he’s not wholly blind to the problem here. He acknowledges that such a call is “very idealistic” given that market power buys political power via paid lobbyists. But this misses the point that capital has many other sources of influence over government. There’s simple deference; Gordon Brown’s kowtowing to bosses was not motivated by personal greed. There’s the belief (which as Eeckhout shows is sometimes dubious) that high profits are necessary to create jobs. There’s simple ideology, which politicians have internalized. And of course, there is the influence of the media.

Reigning in monopoly power requires governments to overcome these forces. And that in turn requires the growth of either a threat to capitalism itself or at least a countervailing power to capital. It’s no accident that capitalism was more equal (and productive) when there were strong trades unions and a threat of communism.

So yes, I think we do need intellectual (and social and economic) history – because it teaches us that meaningful improvements in economic policy must be a collective effort and not merely clever people proposing technocratic tweaks.

Tony Milligan is Senior Researcher in Ethics with the Cosmological Visionaries project, King’s College London Cross-posted from The Conversation The only six sites on the farside of the Moon suitable for telescope arrays of around […]

From fintech to food systems and social media to all domains essential for society and the economy, the State of Big Tech compendium of fifteen essays offers a vision and blueprint for the 99% to […]