Regulation gets a bad name in much of the world today; business lobbies have successfully equated it in many people’s minds with just so much “red tape”. But the need for stronger, and more precautionary, regulations has never been clearer. Yet, provisions on “regulatory cooperation” and “good regulatory practices” in international trade agreements threaten to undermine precautionary environmental, labour, consumer and public health policy. 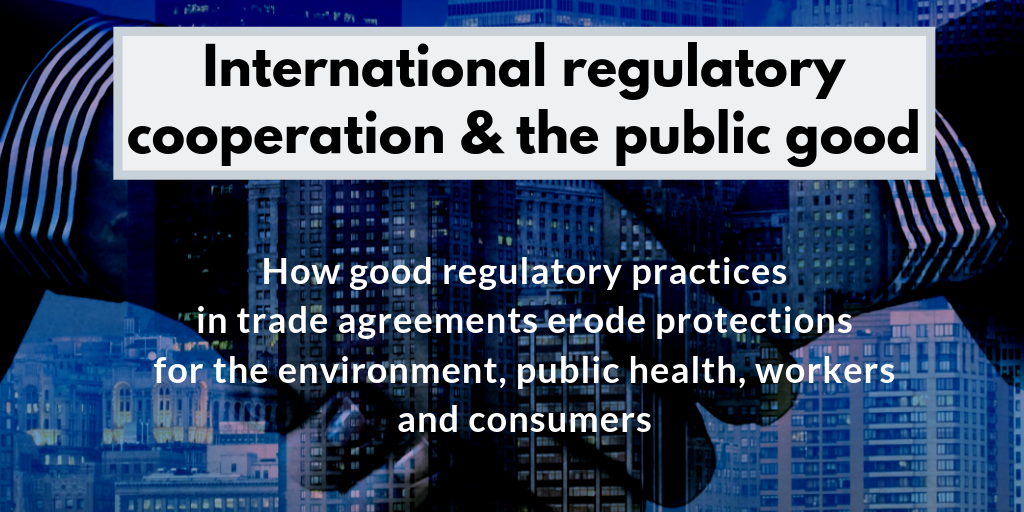 Government-imposed rules on how things are made, how services are delivered and what products have no place on the market at all are said to hamper business competitiveness. Precautionary measures aimed at safeguarding people’s health, or the health of fragile water bodies and ecosystems, are labelled unfair barriers to trade and investment — a claim made increasingly over the past quarter-century of corporate globalization.

At the same time, the need for stronger, and more precautionary, regulations has never been clearer. New science on the effect of chemicals on human and animal bodies strongly suggests we should be much more strictly controlling certain compounds in pesticides, cosmetics and other products — or taking those products off the market while we fully assess their risks. Our oceans are awash with plastic products nobody needs. And it’s now obvious that market-based carbon trading schemes cannot, on their own, lower greenhouse gas emissions enough for countries to meet their Paris Agreement targets. More forceful action will be needed on all these fronts — even if that action creates new trade barriers.

Since the 1995 founding of the World Trade Organization (WTO), environmental NGOs and public interest watchdogs have warned that overly restrictive language in the WTO agreements unfairly constrains the policy options available to governments for conserving animal and plant habitats, eliminating pollution, reducing greenhouse gas emissions and taking toxic chemicals out of our consumer products, among other public interest priorities. While some progress has been made to remedy this imbalance in newer free trade agreements — through the inclusion of environmental, labour and sustainable development chapters, for example — big business has lobbied successfully for other, less-discussed provisions and chapters that institutionalize an ideology of deregulation.

This report focuses on the significant threats to precautionary environmental, labour, consumer and public health policy from regulatory cooperation and “good regulatory practices” chapters within the EU-Canada Economic and Trade Agreement (CETA), US–Mexico–Canada Agreement (USMCA), and the currently parked EU-U.S Transatlantic Trade and Investment Partnership (TTIP). It will be argued that, while international regulatory cooperation is often pitched to governments and the public as innocuous or beneficial, the terms under which this cooperation takes place belie its real function as a further entrenchment of corporate bias in the globalization project. “Good regulatory practices” can, and are intended to, delay or distract the public and decision-makers from introducing more democratic and sustainable economic and social policy.

Good regulatory practices are intended to delay or distract the public and decision-makers from introducing more democratic and sustainable economic and social policy.

Typically, regulatory cooperation and “good regulatory practices” chapters in trade agreements require governments to institutionalise voluntary or mandatory arrangements through which public servants in different countries can and in some cases must work together, usually in close collaboration with industry, to reduce or eliminate differences in domestic laws, policies, standards, regulations and testing procedures — including health, environmental and consumer protections — that are said to impede trade. This trade bias in the regulatory process has roots in U.S. law, but it has since been elaborated in a set of regulatory best practices developed within the Organisation for Economic Cooperation and Development (OECD) and at the WTO.

One important tenet of “good regulatory practice” is that regulation should be based on “risk management”, meaning that its objective is limited, and it is justified by currently available scientific evidence. As the risk-based regulatory framework has evolved, it has come to also require regulators to minimize the costs, or “burdens” on business, consider how they might regulate in ways that encourage trade and innovation, and adopt international standards or practices wherever possible. These tenets attempt to strip political or ethical considerations from government rule-making and are, in a fundamental way, directly opposed to the precautionary principle, which states: “When an activity raises threats of harm to human health or the environment, precautionary measures should be taken even if some cause and effect relationships are not fully established scientifically. In this context the proponent of an activity, rather than the public, should bear the burden of proof”.

“Good regulatory practices” (GRP) are therefore, at once, an ideology of how and when government should intervene in the market (to protect people or nature, for example), a set of institutional arrangements for regulating in a pro-business way and in cooperation with other governments, and a new privileged space for multinational corporations to intervene in national rule-making, frequently and at the earliest stages. This report begins by exploring the roots of “good regulatory practices” ideology in the WTO, OECD and U.S. law. It then examines how GRP-based regulatory cooperation has functioned between Canada and the United States and compares that to the expected functioning of similar bodies in the concluded CETA and proposed TTIP and USMCA agreements. Following this, we consider what business lobbies have said they hope to get out of transatlantic regulatory cooperation.

Good regulatory practices create a new privileged space for multinational corporations to intervene in national rule-making, frequently and at the earliest stages.

The report concludes by considering the benefits of precaution and regulatory leadership, along with some alternative forms that international regulatory cooperation could take that are not based on the deregulatory GRP ideology. The findings here should be of special interest to European policy-makers, activists and the public as the European Commission sets out to revive the stalled TTIP negotiations — even as opposition to the ratification of CETA with Canada remains strong. But the report should also resonate in North America where policy-makers will soon debate the ratification of a NAFTA replacement that includes the most aggressive, shortsighted “good regulatory practices” chapter negotiated to date.

Richard Murphy – Austerity and interest increases are not in any way required by inflation. If they happen they are the politics of upwards redistribution of wealth

Be it a government deficit, inflation, or too much democracy, austerity is always the policy of choice for neo-liberals. Richard Murphy is an economic justice campaigner. Professor of Accounting, Sheffield University Management School. Chartered accountant. […]