On August 15th, the failed crypto lender Celsius filed a monthy cash flow forecast and a statement of its assets and liabilities held in the form of cryptocurrency and stablecoins. They showed that the lender is deeply underwater and will run out of money within two months. 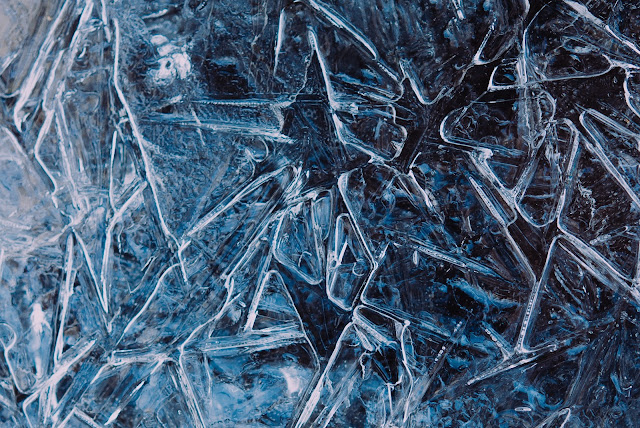 Photo by erin mckenna on Unsplash
On August 16th, Celsius presented an update regarding its chapter 11 bankruptcy plans. Reading this, you’d think it was a different company. Liquidation isn’t on the agenda. No, they are talking about “reorganization” and and seeking debtor-in-possession (DIP) financing: 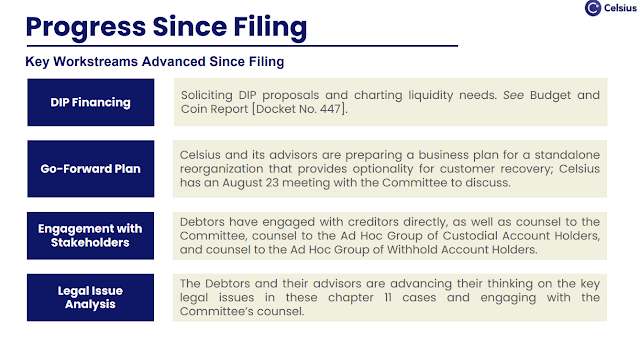 DIP financing is a specialist form of finance for companies in chapter 11 bankruptcy to enable a company to continue operating. It usually takes the form of term loans. DIP loans are secured on the company’s remaining assets and are typically senior over all other claims, so must be repaid before claims from existing creditors can be settled. Because DIP finance dilutes existing claims, the bankruptcy court must agree to it.

In Celsius’s case, the bankruptcy court will be advised by the Creditor Committee and the Ad Hoc Groups of custodial and withheld acccount creditors. These creditor representatives will want to be satisfied that enabling the company to continue operating will give them a better chance of recovery than putting it straight into liquidation. I don’t know what they will make of the cash flow forecast and “Coin report” filed yesterday, but the figures in these documents make me extremely sceptical. I am struggling to see why the company isn’t going straight into liquidation.

First, the cash flow report. This is operational, not accounting, cash flow. In other words, it is the cash Celsius needs to meet its obligations day-to-day. Celsius has helpfully outlined liquidity in red to make it easy to read: 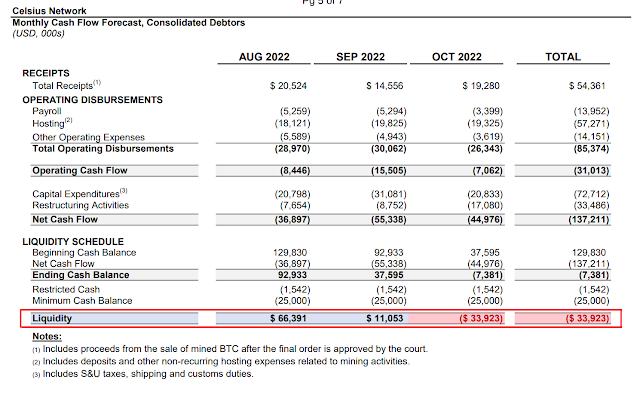 Celsius is burning through its remaining cash at an extraordinary rate. As we might expect from a company that is unable to trade at the moment, total receipts are some distance adrift of total operating disbursements, so operating cash flow is significantly negative.

But it’s not operating cash flow that is burning through Celsius’s cash. It is unspecified “capital expenditures”, which are swallowing cash at a rate of $20-30m per month. What on earth is Celsius purchasing that costs that much, why is it incurring sales taxes, shipping costs and customs duties, and above all – why is it still doing it? Also, why is the cost of “restructuring activities” going to increase by nearly $10m in October? If I were on those creditor committees, I’d want to know where my money is going.
If Celsius carries on splashing the cash at this rate, it will run out of money within two months. The forecast for October is for a liquidity shortfall of nearly $34m. Since this means being unable to meet its obligations as they fall due, it is actual bankruptcy, rather than simply balance sheet insolvency. Presumably Celsius is soliciting DIP finance to relieve the liquidity shortfall. But to me, this looks like throwing good money after bad. What, exactly, about Celsius’s financials indicates that lending it more money will achieve a better recovery for its existing creditors?
The Coin report is no help. It shows that the company’s total coin liabilities exceed its total coin assets by over $2.8m at fair value. 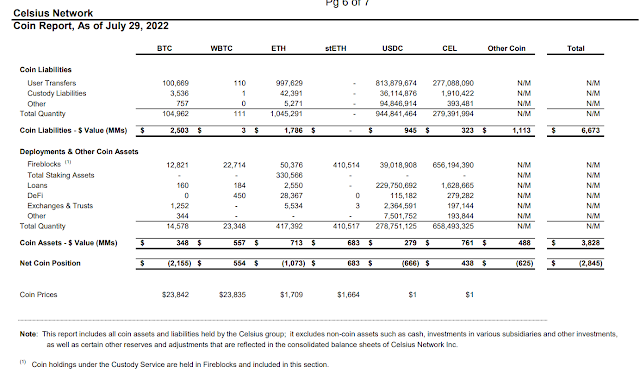 It has net negative positions in BTC, ETH, USDC and other coins, most likely because of runs on customer deposits, and although its positions in the derivatives wBTC and stETH are positive, both of these are extremely illiquid. And the value of its own coin holdings is presumably inflated by the social-media-driven “Celsius Short Squeeze” that has recently pumped up the price of the CEL token. It seems rather unlikely that CEL will remain at this price, though stranger things have happened in crypto.

Celsius claimed in its July presentation that a key factor in its insolvency was the collapse of the market prices of BTC and ETH: 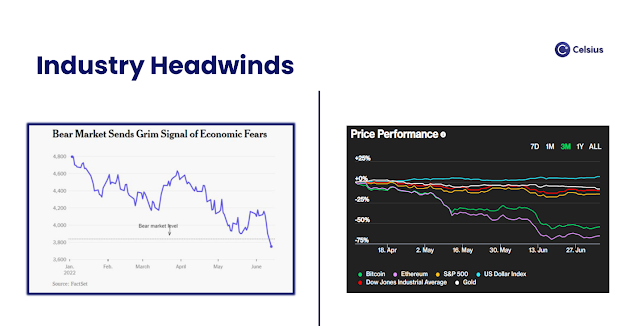 But I’m afraid the Coin report rather gives the lie to this. Celsius’s positions in BTC and ETH are net negative at fair value. So a recovery in the market prices of these coins wouldn’t restore balance sheet solvency.
In his Court affidavit, Alex Mashinsky, Celsius’s CEO, said the company planned to use mined BTC to close the company’s balance sheet deficit.

In similar vein, Celsius’s July presentation indicated that Celsius’s management intended to try to turn round the company rather than liquidating it, and part of the recovery strategy involved mining activities:

But there simply isn’t enough mining going on to touch that balance sheet deficit. The Coin report shows a BTC asset balance of $0.384m, all of which is mined BTC, versus a BTC liability of $2.5m. The attached Mining Activity report says Celsius sold about a quarter of its mined BTC prior to the Chapter 11 filing, so the value reported on the Coin report is most of what has been mined so far. And a footnote to the liquidity report says that total receipts include the anticipated proceeds of forthcoming sales of mined BTC for which Celsius is awaiting the permission of the court.
The fact is that a turnaround plan that relies on existing mining activity is going nowhere. Mining rigs don’t run on fresh air, so Celsius needs to sell part of the BTC it has already mined to keep the rigs running. It can’t use it to close the deficit.

If Mashinsky’s turnaround plan involves massively expanding mining activity, that would explain the capital expenditures that are eating Celsius’s cash.  But this seems to depend on there being a strong recovery in BTC prices without a commensurate increase in mining costs – which is not how BTC mining works. This is by any standards an extremely high risk, not to say reckless, strategy.

High-risk and reckless strategies have brought this company to its knees. It is hard to see what benefit there would be to creditors from throwing what is left of their money into yet another such strategy.
I’m not seeing anything in Celsius’s published financials that justify trying to keep it going. It is, to coin a phrase, heading for absolute zero. Liquidate it now, before it wastes any more of other people’s money.

Taxing away billionaires to end inequality. Michael Roberts is an Economist in the City of London and prolific blogger Cross-posted from Michael Roberts Blog The Triumph of Injustice: how the rich dodge taxes and how […]

An analysis of the risks involved in the response to the coronavirus. before, during, and after. Michael Roberts is an Economist in the City of London and prolific blogger Cross-posted from Michael Roberts Blog There […]