Frances’s brilliant book “The Case for People’s Quantitative Easing” examined the strategic use of helicopter money. Today is the wrong time, she concludes. 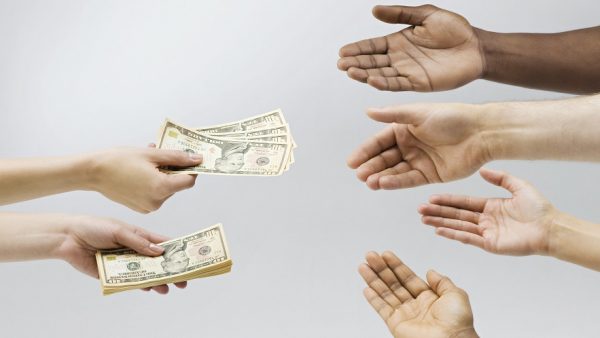 “Give me chastity and continence, but not yet,” sighed St. Augustine in his Confessions. Today, as the world reels under the impact of coronavirus, policymakers are at last reaching for tools I have long advocated: helicopter money and Universal Basic Income. And yet, like St. Augustine, I find myself sighing, “Lord, grant us helicopter money and Universal Basic Income, but not yet.”

I have spent much of the last decade advocating giving people money. Helicopter money in recessions, to boost spending and kickstart recovery: and Universal Basic Income (UBI), to set a floor under incomes and ensure that no-one is ever left without the means to live. Now, because of the coronavirus, both are for the first time being widely, and seriously, considered. The US Government is about to give payments directly to every American adult: strictly speaking this is fiscal policy, not helicopter money, since it isn’t directly financed by the central bank, but as the Fed is buying Treasuries as if they are going out of fashion, the distinction is specious. And there are other loud calls for governments to break out the helicopters and install UBI.

But this crisis is unlike anything we have ever seen. It is nothing like 2008, or even 1929. There are no collapsing banks leaving trails of destruction across the real economy. Stock markets are crashing, true, but that is a response to the crisis, not a cause of it. The deep economic recession that is now inevitable is being deliberately engineered by governments to suppress a virus. Shops and businesses are being shuttered, and people are being told to stay at home for their own protection. It’s rather akin to putting a patient into an induced coma.

Using helicopter money now would be like throwing water on the face of that patient while simultaneously administering anaesthetic to keep them unconscious. It won’t wake them, and the water will just make the floor slippery, endangering the lives of those caring for the patient.

Some people argue that cash transfers would help support the incomes of people losing their jobs. But cash handouts can’t replace lost wages. And those who aren’t losing their jobs, or have unearned incomes, have no means of spending the money while the economy is in its induced coma. Much of it would simply be saved. Then people would say this shows helicopter money doesn’t work, and a perfectly good tool would be thrown on the scrap heap because it was used at the wrong time for the wrong purpose.

Right now, we don’t need a demand boost. We need to survive. And that means protecting people who are unable to work and businesses that are unable to trade. People’s incomes must be maintained, and they need to know that they still have jobs. And businesses must be able to mothball themselves without risking bankruptcy. I’ve proposed three measures: wage support for employees; cash flow support for businesses; and a basic income for self-employed, gig economy workers, people who have lost their jobs, and anyone who is unable to work. As a result of recent extraordinary measures, much of this is now in place in many countries, though there is still more to do.

But we also need an exit strategy. We’ve put the economy to sleep for what we hope will be a short period of time but could be as long as 18 months, according to researchers at Imperial College. But eventually we will want to wake it up – and that will be the right time for helicopter money. So central banks should be planning now for generous cash transfers to households when the government signals that the crisis is over and it is time to get people spending again.

But what about UBI? An emergency basic income would relieve the misery of people in the gig economy and remove the uncertainty of those who are losing their jobs. It would enable people to stay alive without having to navigate a complex benefits system that is unfit even for its normal purpose and is already overwhelmed by the volume of new claims. Giving these people a basic income seems like the obvious way of short-circuiting this nightmare. A report from Compass recommends an emergency basic income for self-employed people, gig economy workers, and the newly unemployed, delivered through existing systems and with extensive help from local authorities and charities. It would supplement rather than replacing existing benefits.

But a genuine UBI would replace, not supplement, existing benefits. And most proposals for emergency UBI set the level too low for many of those losing their incomes. They would be better off with existing benefits, particularly housing benefit. Also, a genuine UBI would go indiscriminately to everyone. Most of those receiving this money would not need it, and at the present time would have little means of spending it. As with helicopter money, it would mostly be saved.

However,, this crisis makes it crystal clear how much we need UBI. If UBI had already been in place when the government put the economy to sleep, we would not now be stressing out about how to keep people alive when their incomes have disappeared overnight and the benefits system is collapsing under the weight of new claims. So as part of our exit strategy, we must look seriously at implementing UBI for the post-crisis economy.

“To everything there is a season, and a time for every purpose under heaven,” says the Prophet in Ecclesiastes. The time for helicopter money will be when the virus has passed and the economy needs a boost. And the time for UBI will be when we make the changes we need to ensure that an economic crisis can never again deprive people of the basic means to live.

Everyone or No One

Every year when we begin our fundraising campaign someone asks why we invest so much time and work when we could simply introduce a paywall on BRAVE NEW EUROPE. The answer is simple. We believe […]

This is an important article. An excellent example of the EU in the service of international corporations working against the interests of its citizens, against the environment, and against democracy. Corporate Europe Observatory is a […]