Following the OXI vote on 5 July 2015 Alexis Tsirpas ceased to be a leader and became a politician instead. Thus this was not a surprise. Read more on the topic here

At least 91 people have been killed in wildfires in Greece, with the Greek government, led by Alexis Tsipras, facing criticism over its handling of the disaster. George Kassimeris argues that the response from Tsipras constituted a failure of political leadership, and it is difficult to see how he will be able to re-establish his reputation and the reputation of his party in the eyes of the country.

Professor George Kassimeris is chair in security studies at the University of Wolverhampton. He tweets @GKassimeris 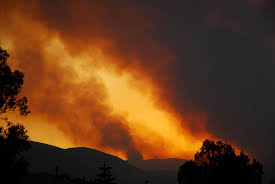 Cometh the hour, cometh the hollow man or in Greece’s case, the hollow prime minister: Alexis Tsipras. Greece, over the past week, has gone through its gravest and most traumatic crisis since the second world war, after devastating wildfires decimated an entire seaside community outside Athens. As the death toll has now risen to 91 with another 25 people still unaccounted for, the horrific images of terror, anguish and destruction will remain imprinted on the national collective memory long after the demolition of all charred remains.

Obviously, a wildfire as ferociously deadly as this one is beyond human blame, and the political miscalculations that have come to light – the negligent planning, the delayed rescue and aid efforts – should not all be laid at the feet of the Greek government. That said, there could be no clearer instance of a situation where serious, effective leadership was desperately required. Defining moments demand from national leaders courage, character, imagination and most critically compassion. The Greek prime minister (the youngest in the country’s history) has failed dismally to show any of these qualities.

Oblivious and possibly ill-informed about the speed and ferocity of the destruction taking placing, Tsipras at first reacted as if he had been so lulled by his summer sojourn that he was not quite ready to acknowledge reality, let alone attempt to master it. It took him more than 48 hours to decide to come out of his prime ministerial cocoon and deliver a few plain human sentences that people could understand before vanishing again. Only when the magnitude of the calamity became unbearable for the people on the ground did he resort on the fifth day –yes, the fifth – of the disaster to accepting ‘full political responsibility’, though without apologising or satisfying calls for the resignation of his civil protection minister and other key officials.

It was an empty, pointless gesture designed primarily for political damage-limitation purposes and which naturally added insult to injury for the people affected and the relatives of the victims. ‘How does he plan to redeem this political responsibility? What does political responsibility mean?’ a distraught 79-year-old man angrily asked a TV reporter, standing in front of his burnt home.

It is literally incredible that a politician like Alexis Tsipras, supposedly so savvy and politically astute could fail to appreciate how insensitive and contemptible this behaviour would appear. But then again, the same type of insensitive contemptible behaviour was displayed by George W Bush during Hurricane Katrina and Theresa May during the Grenfell Tower fires when both leaders not only failed to demonstrate compassion and empathy but even declined to visit the devastated areas right away. For the record, Tsipras’s unacceptably belated visit to the ravaged areas came a week after the event.

Political leadership is about courage, character and example. If such leadership is to mean anything at all, it must stand for principles that are believed in themselves. It is impossible to look at the Greek premier’s slow, detached, uncaring and unapologetic reaction to a grave national crisis and not conclude that sadly for him as a leader and tragically for the country as whole, he failed on every front.

As the county is trying to recover from the trauma of what happened, the question now is: will he be able to re-establish himself and his government in the eyes of the country? This is very unlikely, in my opinion. He has become damaged goods. His inability over the last week to do more than the bare minimum in a time of unparalleled disaster has cost him the respect of the Greek media and through them the faith of the Greek public.

We have posted a number of articles concerning Universal Basic Income – pro and contra. In this posting Karl Brenke, using Germany as an example, comes to the conclusion that UBI is not economically feasible […]

Corporate power has captured the centralised state – but Labour’s commitment to a Constitutional Convention offers root and branch reform, writes Jon Trickett. Jon Trickett  is a Labour MP and Shadow Minister for the Cabinet […]

The success of populist parties is often viewed as an act of protest against ‘the establishment’. Drawing on new research, Bram Geurkink, Andrej Zaslove, Roderick Sluiter and Kristof Jacobs illustrate that this may not always […]