While the EU, the IMF, and Syriza are trying to sale the tale of a Greek recovery, the facts reveal another story.

Stavros Mavroudeas is Professor of Political Economy at the Department of Economics at the University of Macedonia, Thessaloniki 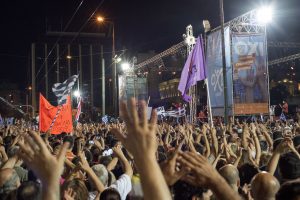 In a recent article Marco Revelli published in Greek and Italian – a habitual guest in Greece of SYRIZA and its government – made a diatribe against what he called ‘pseudo-left’ for considering Tsipras a traitor and SYRIZA’s economic policy a failure. In an uncalled-for polemic (that included one of the signatories of this reply, here his article in New Brave Europe), he accused this ‘pseudo-left’ for being nationalist and for helping the populist and nationalist right-wing ND in Greece. Revelli gratuitously equates every left criticism of SYRIZA’s policies with the neoliberal one of ND.

He begins by praising SYRIZA’s ability to manage better troika’s austerity program so as to avoid a greater social damage. The evidence he offers is to say the least flimsy or simply wrong. Medical services remain underfunded and with gross lack of personnel. On top of that, SYRIZA has signed (in the 3rd Memorandum) and is pursuing deep cuts in both welfare benefits and pensions (note that 51% of households rely on pensions). In particular, a huge new cut is scheduled for January 2019. These cuts have increased the levels of poverty in Greece even more than previously (approximately 37% of the population are at risk of poverty or social exclusion). The protection of the first home ownership from auctions is withdrawn (according to the Memorandum signed by SYRIZA) and auctions of people’s homes proceed at a faster pace, aided by electronic auctions legislated by SYRIZA so as to avoid public resistance and protests. This is something that even the previous governments had not dare to undertake. New taxes are being put on the working and the middle classes worsening even further income distribution. On the other hand, the flagship of Greek capital – the shipowners – not only remain scandalously untaxed but SYRIZA (similarly with all previous governments) has heartily embraced them and protects their privileges. Last but not the least, Revelli instead of talking nonsense regarding the health sector, he should better look at the evidence: new cuts have been imposed by SYRIZA and the health expenditure has been so severely curtailed that it is not viable.

Revelli uses a sophistry in order to masquerade this sham. He maintains that we must measure the state of the Greek economy not from the beginning of the crisis but since SYRIZA’s ascent to the government. Then he argues we can see that growth has returned and unemployment is falling. Revelli (and SYRIZA’s mouthpieces in Greece) forget that the economic policy applied in Greece is one and continuous: troika’s austerity policy. This irrespective of minor management differences of the three consecutive Greek governments (PASOK, ND-PASOK, SYRIZA-ANELL) which were merely cosmetic. The great bulk of the fiscal consolidation of the program had taken place under the previous governments. So, the part left for SYRIZA was smaller; although his policy blunders worsen it. Depression was slowing the previous years and positive growth rates were nearing. This was not something unexpected. Capitalist economies operate with cycles. The abnormal thing was the length and the debt of the Greek depression. However, the return of positive growth rates does not guarantee neither their size not their longevity.

But Revelli’s growth under SYRIZA argument is wrong even in his own terms. The return to growth is meagre and continuously falls behind official projections. The output gap remains very high (25% less than output’s level at the beginning of the crisis). The better-than- projected primary surpluses are due to the increased taxation and the severe restriction of public expenditure. Both these policies applied by SYRIZA dampen the growth potential as Greece remains a consumption-led economy. Also, SYRIZA’s much publicized ‘exit to private international markets for loans’ is, similarly to that of the previous ND-PASOK government, a sham. It concerns mainly debt servicing, it comes at very high cost (around 4% interest) and does not extend beyond the period of troika’s supervision of Greece. And once problems appeared in the EU with Italy’s new government and the trade war with the US it was put on hold.

SYRIZA is also preaching that it had reduced unemployment. This is also a fake argument. Unemployment remains very high (more than 20% with youth’s unemployment as high as 40%). It has been slightly reduced because there is a decrease of the labor force because of population shrinkage and immigration abroad (a recent European Commission study projects that Greece’s labour force will be reduced by 35% during 2020-2060; according to the official data more than 710,000 Greek citizens migrated during the period 2010-2016). Furthermore, new jobs are bad jobs: just a few months of employment which are enough to get you out of the unemployment lists (full-time jobs are decreasing from 2017 till today, 3 out of 4 unemployed are in long-term unemployment), with meagre wages and barbaric working conditions.

Revelli employs another sophistry. While he laments that the EU did not concede to a debt haircut for Greece, he argues that the debt reprofiling offered (in the form of payment extension and smoothing the interest rates) amounts to a haircut. This is the argument posed by Germany and the EU and Revelli (and SYRIZA) wholeheartedly accept it. However, as even the recent study by IMF (1st August 2018) shows, its effects are ambiguous (Greece gets a debt relief if it applies new neoliberal reforms and succeeds in keeping the austerity program on track; which actually would make debt relief unnecessary) and its actual impact insubstantial. For this reason, every serious Debt Sustainability Analysis of Greek debt (IMF’s 2018 one included) concludes that it is unsustainable. Tellingly, the debt to GDP ratio remains higher than 180% (it has actually increased during the last months because of the new loan tranches) and it will increase after the end of the 10year debt payment referral (as IMF 2018 estimates). In the possible case of worse scenario (smaller growth, higher interest rates, lower primary surpluses) IMF estimates that it will go up to 198% in 2023.

Moreover, the EU and the SYRIZA government declare that Greek debt is sustainable because Greece will achieve spectacular growth rates (on average 2% for a considerable period of time, which conspicuously has never been accurately defined) and primary surpluses (3,5% till 2022 and 2,2% till 2060) for a very prolonged period of time. As it is well known in economic literature (and even the IMF reiterates) this is totally unrealistic. Only a very few oil-producing economies have succeeded in achieving such targets. Note also that failure to achieve these targets will activate the automatic ‘cutters’ in wages, pensions and fiscal expenditure that SYRIZA (as early as during Varoufakis ministerial position) has agreed to.

What actually happened in the recent debt negotiations is that the SYRIZA government conformed completely with EU’s dictum that no debt haircut will take place and didn’t even try for a debt haircut.

There is another argument proposed by SYRIZA supporters. That in August 2018 there would be an exit from troika’s supervision and this will permit SYRIZA to apply more active growth-enhancing fiscal policies. This is totally untrue. As even E.Tsakalotos declared supervision by a new troika (with the ESM instead of the IMF) will continue for many years. Furthermore, given the very high primary surplus targets the room for more active fiscal policy is non-existent.

A last point of defense for SYRIZA supporters is that there was no alternative but to accommodate with the EU. This is also a lie. A true Left government in Greece should confront the EU and disengage from it. The Greek crisis is, too a great extent, the product of Greece’s economic restructuring since its accession in the European Common Market. This led to Greece’s deindustrialization, shrinkage and deformation of the primary sector and an overblown and fragile services sector. This productive model has failed utterly, has caused the debt crisis and it cannot be rectified within the EU. It was further aggravated by Greece’s participation in the EMU and the subsequent ceding of crucial economic policies (e.g. monetary policy and ultimately even fiscal policy) to the EU.

This alternative course is perfectly viable but it requires a deep change in Greek society and a confrontation with the dominant interests of Greek capital that is inextricably tied to the European integration. SYRIZA – leaving aside its many contradictory and inconsistent pre-electoral bravados – was never willing to follow this course. It considered it too dangerous for SYRIZA. Furthermore, SYRIZA has well known ties with significant sections of Greek capital; particularly fractions of maritime capital that dominated Greek capitalism in the 1970s and 1980s (called in Greece the ‘old fireplaces’). These ‘old fireplaces’ favoured SYRIZA’s ascent to government and through this took their revenge against the ‘new fireplaces’ that surpassed them in the 1990s.

The misfortune in the Greek case was that the Greek Left (all of its sections) shied away from proposing in concrete terms the abovementioned alternative programme and restraint itself to simply promoting popular mobilisations (resisting troika’s changes but without offering an alternative) and an abstract anti-capitalism (that despite its vociferousness failed to concretely challenge capitalism). This facilitated SYRIZA to steal people’s support; and of course, subsequently, to betray the people.

The current challenge for the Greek Left is how to revive this alternative and, in this way, block the ascendancy of extreme right-wing forces that is being fomented by SYRIZA’s exorbitant failure.

Concluding, Revelli’s diatribe rests on totally insubstantial arguments. SYRIZA is preaching, very similarly with the previous governments, that he is making a ‘success story’. Both ‘success stories’ are equally fake. Greece and its people are doomed within the shackles of the EU.

A final note regarding the true and the pseudo Left. It would be advisable next time M.Revelli accuses others for being pseudo-leftists first to have a look at his mirror.

An Open Letter to the World Bank concerning Public-Private Partnerships

In an open letter to World Bank directors, 34 organisations, networks, and trade union confederations oppose World Bank support for Public-Private Partnerships To: European World Bank Executive Directors Re: Follow up to the 2019 Annual […]

As Cop26 meeting approaches, analysis shows world is on track for 3C temperature increase if present trends continue. It comes a no surprise that the effort of the EU and Germany are rated “insufficient”. The […]