The strike, organised by the Independent Workers Union of Great Britain (IWGB), intensifies the pressure on the UK-based food delivery platform over it’s ‘bogus self-employed’ labour policy, which has become a major issue in the company’s Initial Public Offering (IPO), which opens up to trading from retail investors today.

The launch of Deliveroo’s IPO with institutional investors last week [31 March] was described on the front-page of the Financial Times as ‘the worst IPO in London’s history’, with the stock dropping as much as 31 per cent in value almost immediately upon trading.

Twelve UK institutional investors had already ruled themselves out prior to trading, citing concerns over the company’s gig economy model, with one describing it as a “ticking time bomb” following the ruling of the UK Supreme Court in February, which found that Uber drivers are workers not self-employed contractors. Uber responded to the verdict by accepting the worker classification, and agreeing to some workers’ rights, including minimum wage and holiday pay.

Deliveroo riders operate on a very similar basis to Uber drivers, with courts in Spain, Italy and Netherlands already finding that delivery workers for the company should be considered employees. Competitor Just Eat has already declared that it is ending its gig economy model, and will instead hire workers on contracts. An investigation by Bureau Local analysing hundreds of Deliveroo riders invoices in the UK found that one in three riders on average earn under the minimum wage.

Deliveroo had initially priced its IPO at £9 billion, but after investor push-back it settled on a £7.6 billion valuation before the IPO was launched. Shares closed at 280p yesterday [6 April], giving the company a valuation of £5.1 billion. The FT reported on Tuesday [6 April] that Deliveroo’s stock debut could have been even worse if Goldman Sachs, the bank which underwrote the company’s listing, had not stepped in “to prop up” the company with a £75 million investment, which equates to nearly a quarter of all shares traded in the company.

Deliveroo’s share price has gained 3.9 per cent since some 70,000 retail investors began trading in the company on Wednesday morning, making up about one-seventh of the losses on the first day of trading last week.

Ahead of the strike, Greg Howard, Deliveroo rider and chair of the IWGB’s Couriers & Logistics Branch, said: “I’m going on strike for my basic rights and those of all the other riders struggling to get by and support families on Deliveroo poverty pay.

This film may take a moment to appear

“I’ve seen conditions decline for years and then working through lockdown I contracted covid-19 and got very little support from Deliveroo.

“After the pandemic more people than ever understand this exploitation is no way to treat anyone, let alone key workers. The turning of the tide is clear. It’s time for rights for riders.”

Alex Marshall, a former delivery worker and now president of the IWGB, said that riders had “triggered a domino effect which already slashed £3 billion from Deliveroo’s valuation and that should give pause to any corporation that thinks precarious workers can be endlessly exploited without consequence.”

“It’s time for Deliveroo to do the right thing, recognise its riders as workers and treat them like human beings,” Marshall added.

Deliveroo riders are joining socially-distanced protests in London, York, Reading, Sheffield and Wolverhampton this morning, as they deactivate from the app for the day. The IWGB have raised almost £10,000 in a crowdfunded strike fund for Deliveroo riders. 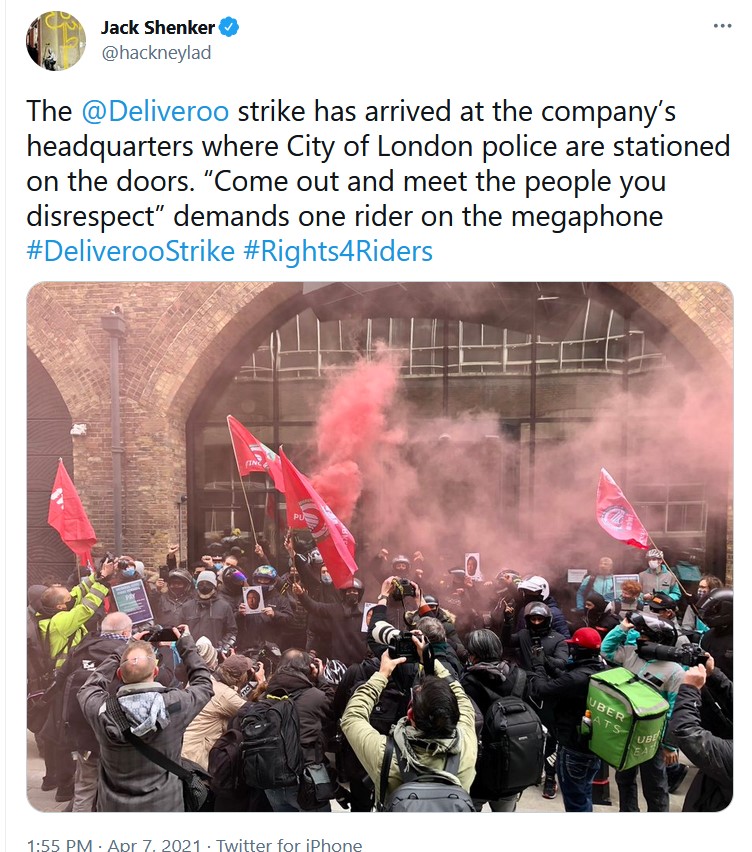 International solidarity actions are being organised by unions in Australia, France, Netherlands, Ireland and Spain. Deliveroo operates in 12 countries internationally.

Responding to the strike, a Deliveroo spokesperson stated: “This small self appointed union does not represent the vast majority of riders who tell us they value the total flexibility they enjoy while working with Deliveroo alongside the ability to earn over £13 an hour.”

In May, a cross-party coalition of 44 MPs wrote to Deliveroo’s CEO Will Shu to “express extreme concern regarding the way Deliveroo riders are being treated during the covid-19 crisis”.

The IWGB’s full list of strike demands are as follows:

– Treat riders with respect and dignity

– Transparency over fees and algorithm

Support the strike of couriers standing up for basic rights

BRAVE NEW EUROPE has donated. Please join us in supporting this strike.

One sees how easy tax dodging is in the EU. If you have problems in one nation, one simply moves to the next. There are almost 200 nations in the world, so there will never […]

Heiner Flassbeck – The case of the Turkish lira

This article was written before Qatar announced it would offer $15 billion to bolster the Turkish economy and Turkey had begun introducing measures to stymie the devaluation of the Lira. Heiner Flassbeck is an economist, […]