The Riders Law in Spain is a European first, but unions are unhappy that delays to its implementation is giving food delivery platforms “plenty of time to ‘disconnect’ everyone they want 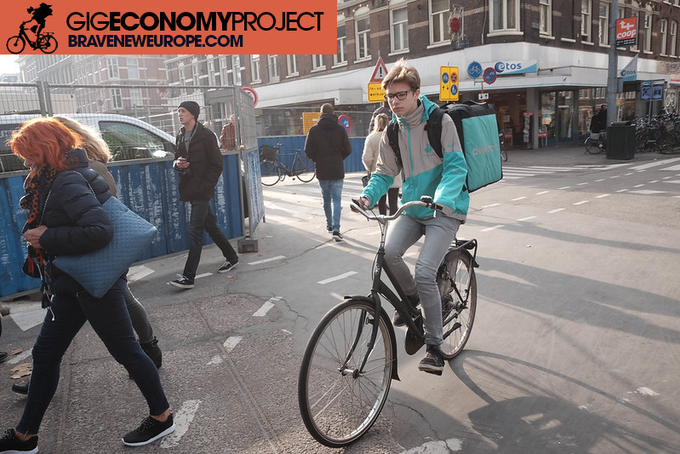 The Riders Law has been officially decreed by the Spanish Government today, two months after a deal was agreed between unions and employers, but unions are angry about a further three-month delay before it is implemented.

The Law, which modifies Spain’s Workers’ Statute so that there is a presumption of employment in the field of digital delivery platforms, is the first of its kind in Europe, and comes after a year of negotiations between the Spanish Employers’ Association (CEOE), the unions UGT and CCOO, and the government, which has itself been divided over the scope of the law.

“We approve a pioneering standard for the protection of delivery workers on digital platforms,” Yolanda Díaz, Podemos’ Minister of Labour in the Spanish Government, said. “Our country is leading a global paradigm shift, by providing rights and labour protection in the technological change that we are experiencing.”

“Plenty of time to ‘disconnect’ everyone they want”

The CEOE pressured the government into the two-month delay between the agreement and the Royal Decree, and the further three months before digital platforms have to adopt the changes has further infuriated unions, with Gonzalo Pino, UGT’s secretary for trade union policy, stating that it gives platforms “plenty of time to ‘disconnect’ everyone they want”.

Pino added that platforms like Uber Eats, Glovo and Deliveroo should have made these changes following the Spanish Supreme Court verdict last September, which found that Glovo riders were workers, not self-employed.

“We are happy that the law will be implemented tomorrow,” Pino stated yesterday [10 May], “it will help to prevent the same abuses in the future, but we cannot keep quiet and we have to say that all the workers who should be registered as employees after the Supreme Court ruling have to start the whole process all over again”.

The movement for riders’ rights in the Spanish state, RidersXDerechos, also released a statement, stating they have “no reason to celebrate” the new law because “throughout this year of negotiations, the Ministry of Labour has, over time, given in to a large part of the employers’ demands and has eliminated and rejected all the proposals made by the unions.”

High up on RidersXDerechos’ list of concerns is the potential loss of jobs which will come if “the process of labourisation” will be “carried out abruptly without guaranteeing the permanence of the current workers”, leading to many riders being de-activated from the app without being given a new contract.

“The creation of fake jobs at the mercy of the algorithm has been nothing more than a bubble that will burst violently if companies are not forced to make the relevant hires, as we do not trust their judgement to responsibly convert all the fake freelancers into employees,” the statement adds.

The three month delay means adoption of the Law will take place in August, the holiday month in Spain, making it problematic to access lawyers to respond to “possible dismissals by these companies”, the campaign group warned.

Other concerns include platforms adopting a sub-contracting model; that the Law is limited to riders rather than all platform workers; that no attempt has been made to regularise undocumented workers who currently sublet platform accounts; and the lack of financial penalties placed on platforms for breaking the law in relation to fake-self employment.

Meanwhile, pro-self employed associations of riders, ‘Repartidores Unidos’ and APRA, have organised demonstrations in nine Spanish cities against the Riders Law. The associations, which have a close relationship to the food delivery platforms, claim that riders want to be self-employed and that the Law could see 80% of riders jobs lost. Glovo, the largest Spanish food delivery platform, left the CEOE over its support for the Riders Law.

A report into the pro-platform associations of riders by the UGT union published today has found that it is an astroturf movement brought to life by the platforms as a means of defending their interests.

The report finds that one of the associations, AsoDrivers, which claims to independently represent Deliveroo riders, was represented by the same lawyer as Deliveroo in a trial involving both parties, and uses Deliveroo’s offices for its meetings. Another association, APRA, was initiated by the Stuart platform following the success of its ‘yellow union’ model in France. APRA was later drawn towards Glovo, holding a meeting with the company’s CEO Sacha Michaud, who is said to have stated that the company had “lost the cultural battle”, and that APRA was needed to motivate workers to lead the charge in reversing public opinion so that it became more favourable to Glovo’s gig economy model.

As government negotiations over the Riders Law drew closer to a conclusion, the pro-platform associations of riders stepped up their activity, helping to foster an anti-trade union atmosphere among some sections of riders which included sharing anti-union images on social media, chasing union activists in the street and sharing personal details about them online. The most troublesome incident of all was a violent attack on a UGT representative, which is now being investigated by the police. 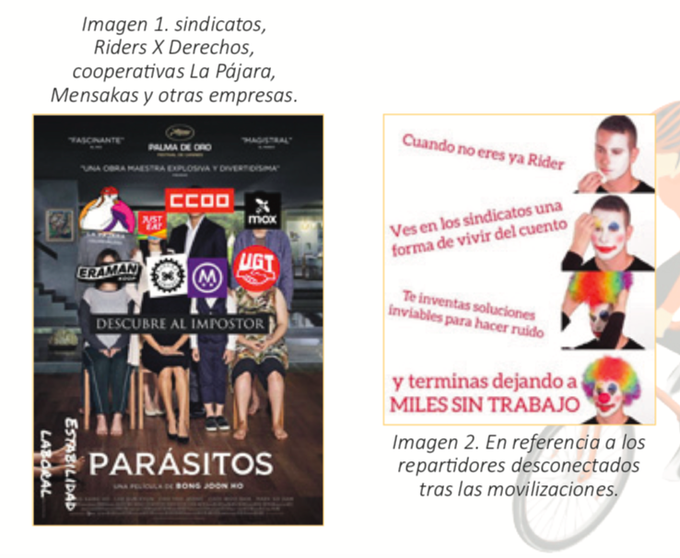 “They waged a real persecution against him, where they also photographed him in the street, published intimate information and photographs, repeatedly discriminated against him because of his sexual orientation, truncated countless videos and images of homophobic content with his face, published his home address and, once the Social Dialogue agreement was announced, they threatened him with death and beat him while he was working,” the report states. “A truly terrible and intolerable situation, worthy of fanatical neo-fascist groups. The underlying problem is that this behaviour has been supported and encouraged by the associations themselves.”

Fernando, a rider and UGT union delegate at Glovo, stated at a press conference announcing the publication of the report that he had suffered personal persecution from some riders for supporting the Riders Law.

“They insult me systematically, every day in front of all my colleagues, they have threatened to kill me, they have assaulted me, they contact my friends to get private photos of me, they have chased us to find out where we live… it is not just political or media pressure, but personal pressure,” he said.

Yanis Varoufakis – SHAKING THE SUPERFLUX: Shakespeare, economics, and the possibility of justice

This is Yanis Varoufakis’ talk held at the 6th Annual Shakespeare Rose Lecture, 19th March 2018, Rose Theatre, Kingston  It is a long, but entertaining and enlightening. A good read for the weekend. Since brevity […]

Gig Economy Project – Global conference of platform workers in Brussels tells EU Commission: ‘We demand to be recognised as employees’

Message from platform workers’ representing 57 organisations in 18 countries was clear: full employment status, regulation of the algorithms, and build the international strength of the movement The Gig Economy Project, led by Ben Wray, […]

The Catalonia crisis is an opportunity for Europe to re-define sovereignty, statehood and European democracy Cross-posted from DiEM25     The EU’s response to the crisis in Catalonia has been hypocritical and logically incoherent. It […]