This is a repeat of what happened in Greece, where the Germans were one of the main perpetrators of corruption. There were no serious consequences for German managers and the fines paid by German companies went to the German state. There are laws and there is Germany, and Germany makes it own laws. 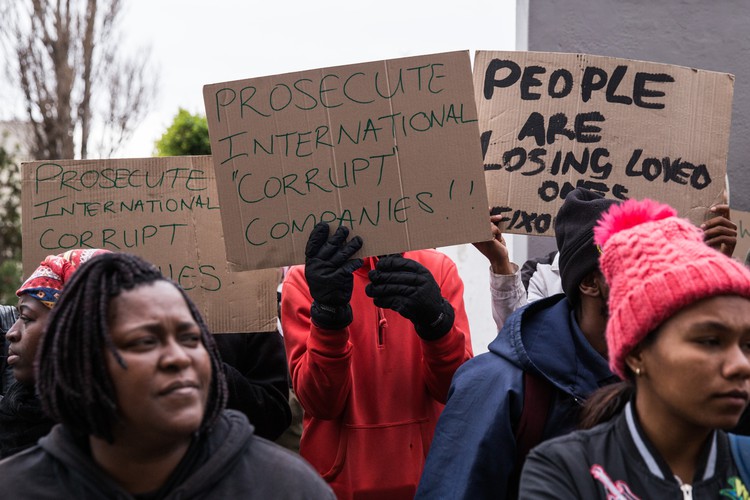 About 50 #UniteBehind members protested outside the German consulate in Cape Town on Thursday. Photo: Ashraf Hendricks

Commuter activist group #UniteBehind has called on the German government to sanction companies and to investigate and prosecute German nationals who were involved in state capture and corruption at the Passenger Rail Agency of South Africa (PRASA). The organisation also called for the European Union (EU) and its other members states to do the same.

European and German companies “have benefited from state capture” said #UniteBehind member Zackie Achmat. Achmat claimed that between R14bn and R24bn has been stolen. He said that they want to make sure that the German government charges and prosecutes those implicated. “There is sufficient evidence to both convict and get the money back,” he said.

Among a host of European companies implicated, #UniteBehind singled out the German multinational rail technology company Vossloh. According to #UniteBehind, it was Vossloh’s Spanish subsidiary Vossloh Espana that fraudulently secured a tender of R3.5 billion for trains that did not fit the South African railway tracks. These “too-tall” trains are now being auctioned off. Other companies mentioned were Siemens and SAP (both based in Germany), Bell Pottinger (United Kingdom) and KPMG (Netherlands).

Ludine Warries commutes from Fish Hoek to Maitland daily. She wakes up at 4am to get to work at 7am but still ends up being late. Warries said that the trains are constantly late and “sometimes there are no drivers”. Because of this, she sometimes cannot get to work and loses a day of pay. If the train shows up late Warries has to use other forms of public transport, which costs her R50 one way, much more expensive per trip than a monthly train ticket that costs her R175. “It’s not fair on us. We’re poor. We’re struggling. So the train is the cheapest option for us,” she said.

A letter was handed over to the German consulate and the German Chamber of Commerce.

“Europe has a very bad history of enslaving, colonising and exploiting. Today their companies still do that but in a very different way and they are assisted by our government. Our protest is not anti-German; it is anti-exploitation,” said Achmat.

In response to a request for comment, a spokesperson at the German embassy wrote: “We share with our South African partners the commitment to the Rule of Law and the fight against corruption. Any suspected cases of illegal activity must be investigated and followed through by the competent judicial authorities.”

Mathew D. Rose – All Quiet on the German Front

Don’t expect much change after the German elections. The corporate elite still determines policy. Mathew D. Rose is an Investigative Journalist specialised in Organised Political Crime in Germany and an editor of BRAVE NEW EUROPE […]

Is it any wonder that the whole of modern Germany society is based on hypocrisy? It is built on lies that cover up its Nazi origins. Thomas Klikauer teaches at the Sydney Graduate School of Management […]

Simple-minded media propaganda – like the claim Russia’s Putin is deranged – is precisely what brought us to the crisis over Ukraine Jonathan Cook is an award-winning British journalist based in Nazareth, Israel, since 2001 […]