China’s economic growth has been eye-catching. The story mostly began in the early 1980s, as the Chinese government introduced the ‘Reform and Opening Up’ policy to transform the socialist planned economy. China was neither the only nor the earliest state to launch marketisation reform, but it was the most successful among socialist nations. What led to this socialist ‘great divergence’ in which China refused big bang reform while other European socialist nations chose shock therapy and encountered continuous economic chaos and failure? This history deserves 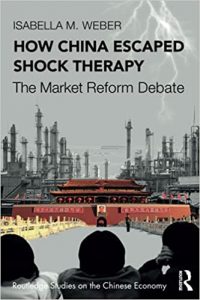 intense attention, but few have looked into it as meticulously as Isabella M. Weber. In her wide-reaching How China Escaped Shock Therapy, we find a map which sheds light on how the Chinese government decided on an ‘experimental gradualism’ (146) rather than shock therapy under the influence of Chinese traditional wisdom and contemporary intellectuals.

Part One of the book delves into Chinese classic lessons (mainly Guanzi), previous experience of price control and deregulation in Western countries and the concrete practices of communist cadres that aimed to manage the economy before the Communist Party of China gained national power. Chapter One explains why Chinese leaders refused shock therapy and were able to introduce the dual-track system in the 1980s, which played a fundamental role in China’s marketisation reform.

Shock therapy prescribes that price controls and the planned economy should be terminated through overnight price liberalisation and meteoric privatisation. Although in the short run there could be economic pain, including mass unemployment and inflation, liberal economists propose that this method will eventually lead to economic recovery, activated markets and prosperity. Shock therapy was once the prologue of the ‘Economic Miracle’ in West Germany (60), but its widespread practice in Russia and Eastern Europe resulted in economic disasters. Chinese leaders found it diametrically opposite to what they had inherited from ancient teaching.

In Guanzi, a political textbook which was written 2000 years ago and preached diverse wisdom about how to conduct ‘politics’, it is taught that administrators should control what is ‘heavy’ (important and essential) for the sake of people’s lives and social stability, and let go of what is ‘light’ (unimportant and peripheral). Guanzi’s original aspiration was to elucidate how to strengthen the capacity for enlarging and wielding resources so that kings could overwhelm rivals in an era of warfare. Therefore, how to achieve ‘prosperity’ and the stable functioning of a society was central to Guanzi. Later, in imperial dynasties, abstract lessons were transformed into concrete practices, such as monopolies on salt and iron, the granary system used to flatten the price of grain, etc.

One important logic outlined in Guanzi is that political stability is prioritised even at the cost of economic freedom. For example, large fluctuations in prices would result in social disorder, which would in turn jeopardise political legitimacy. Wise politicians should try their best to avoid such embarrassing situations. This knowledge has become a kind of instinct guiding how both China’s ancient emperors and contemporary politicians make decisions. It is increasingly acknowledged that present-day China shares much continuity with its past with regards to societal structure and political ideology. The practices of communist cadres in the 1930s and 1940s were in fact influenced by classic wisdom too.

Like Eastern European socialist nations, China also established the Stalinist planned economy in which prices were tightly controlled by the government, and production and distribution were regulated through the commands of planning committees (Chapter Four). By the late 1970s, China had failed to improve people’s living standards or fulfil the promise of a glorious socialism.

After leader Mao Zedong died, politicians started to try possible deregulation and Western-oriented industrialisation. In the early 1980s, attention was drawn to price deregulation which was thought of as the core of marketisation reform. Nonetheless there was little consensus among politicians or economists about how to set the price mechanism free at the outset. Politicians adopted an experimental approach: ‘crossing a river by groping for stones’. The government cautiously and slowly acknowledged the existence of black markets and the small-scale circulation of commodities outside the planning mechanism (175). Markets mushroomed in margins, which became the foundation of the dual-track system.

Through the dual-track system, China gradually introduced price liberalisation. On the one hand, productive units, such as state-owned factories and rural households, had the obligation to fulfil compulsory production subject to the government’s extraction or taxation. On the other hand, after fulfilling compulsory production, those units could utilise their extra capacity to produce more commodities for free circulation in which the price mechanism predominated. Through this process, the price mechanism gradually expanded its scope.

Nevertheless, throughout the entire 1980s, while consensus was reached that reform was necessary, debates continued about which approach, a big bang reform or a gradualist one, would be better. Weber provides a detailed cognitive map in Part Two of those intellectual debates through which we can find clues of why China finally ‘escaped shock therapy’. In the early 1980s, economists from Eastern Europe and the West came to visit and gave lectures in China. But Chinese decision-makers did not take their advice, although some young Chinese intellectuals were proselytised by the package reform that foreign economists proposed.

Later, in 1986 and 1988, China ‘escaped shock therapy’ twice. In 1988, the Chinese government almost practised a wholesale liberalisation, but it led to hyperinflation, unprecedented in the history of the People’s Republic of China, and then social instability. Very soon liberalisation was terminated, and tight control was reintroduced.

Why was a gradualist approach always preferred? In the 1980s those who supported shock therapy were by no means minor or politically weak. The key to the answer to this question might lie in the fact that Chinese decision-makers recognised the possible risky result of a sea change, and they valued social stability above all. Proponents of the planning mechanism, such as Chen Yun, one of the most important ‘engineers’ of the planned economy in the 1950s, never lost their political influence in the 1980s. Surrounding Chen Yun were formed groups of stubborn conservatives who on every frontier opposed liberalisation. They had deep concerns about inflation and social instability which had been a lifelong nightmare for those communist veterans. Several times they succeeded in aborting the plans of those who wanted liberalisation to be faster. Under these circumstances, a compromise was figured out: with the precondition of social stability, a limited price mechanism was allowed to gradually step in. The government must control what was essential for people’s daily life so that social unrest could be avoided. This political logic stems from Chinese classic wisdom through which politicians prioritised social stability and emphasised pragmatic behaviours, as preached in Guanzi. Weber highlights this similarity in her Conclusion.

Thus, contingency and necessity are intertwined here. Debates in the 1980s did not convince Chinese decision-makers of the benefits of shock therapy but exposed the potential risks of such reform. The long-tested political logic also told them to avoid actions which could endanger stability. Out of the gradualist approach grew eventually a market mechanism in the 1990s and 2000s.

Max Weber once made a prediction in 1919: the Chinese would be excellent capitalists, once the obstacles of ethical rules were removed. In hindsight, it could be one of the best predictions ever made in the social sciences. If we speak of economic growth, undoubtedly China’s reform is successful. Behind that was the steerage which sought on the one hand economic prosperity under instructions of liberalist thought, and on the other hand, political stability subconsciously. John Maynard Keynes wrote that ‘practical men who believe themselves to be quite exempt from any intellectual influence, are usually the slaves of some defunct economist’. Weber’s book provides a vivid example of this through her history of Chinese marketisation reforms. To conclude, it was classic wisdom, extant lessons and contemporary debates that helped China to ‘escape shock therapy’.

This book review is cross-posted from the LSE website

The many in one: A review by Branko Milanović of Amartya Sen’s “Home in the world: A memoir”

Shutdown – How Covid Shook the World Economy by Adam Tooze